With Sudan signing today the Abraham accords for renewal of diplomatic ties, Israel is sending feelers also to other Red Sea basin countries for establishing some sorts of relations. 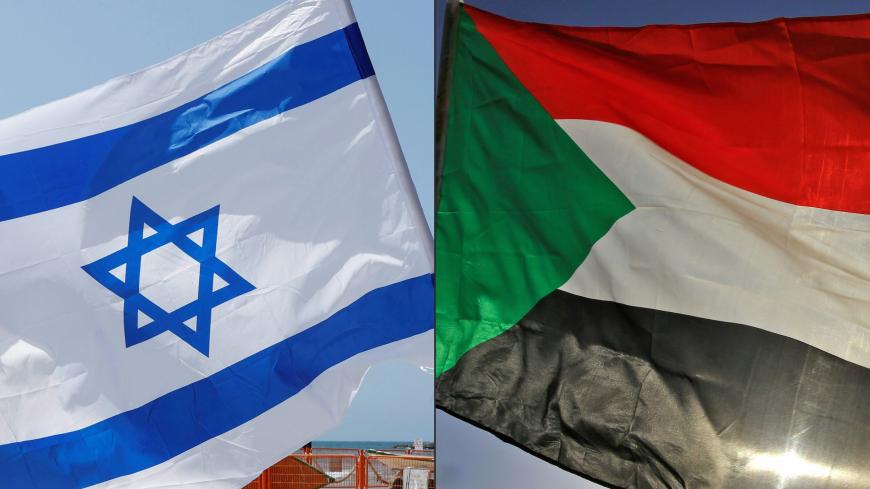 This combination of pictures created on Oct. 23, 2020, shows (L to R) an Israeli flag during a rally in the coastal city of Tel Aviv on Sept. 19, 2020, and a Sudanese flag during a gathering east of the capital, Khartoum, on June 3, 2020. - JACK GUEZ,ASHRAF SHAZLY/AFP via Getty Images

Sudanese Justice Minister Nasredeen Abdulbari signed on to the Abraham Accords today in Khartoum, officially agreeing to normalize diplomatic ties with Israel. The signature took place in the presence of US Treasury Secretary Steven Mnuchin, who is currently visiting the country.

Foreign Minister Gabi Ashkenazi tweeted after the news, “Sudan’s signing of the Abraham Accords is an important step in advancing regional normalization agreements in the Middle East. I want to thank the US administration for its constant efforts to promote peace and stability throughout the Middle East. I hope that this agreement will soon bring progress in the dialogue and normalization between Israel and Sudan and promote the development of relations between our two countries.’’

The signing in Khartoum ended weeks of speculations in Israel over the commitment of Sudan to the move, first announced Oct. 23 by President Donald Trump. After the festive announcement in October, it became clear to Jerusalem that Khartoum was conditioning normalization on the United States erasing it off the blacklist of countries supporting terror. This was not an easy task for the administration in Washington, but on Dec. 14, Khartoum got what it wanted. Still, even then, Khartoum took its time. Parts of the Sudanese leadership were apparently uncomfortable with the idea.

That being said, Israel’s Foreign Ministry sees ties with Sudan as extremely important strategically. The African-Muslim country is located in the Horn of Africa, on the shores of the Red Sea. More so, in past years, Sudan enabled Iran and its proxies to transfer arms though its land. And while Iranian-Sudanese ties have known more downs than ups in recent years, Israel considers Sudan a strategic, key country in the region.

With Sudan on board and excluding Djibouti and Somalia, Israel now maintains diplomatic relations with most of the Red Sea basin countries on the African side. Going from north to south, Israel has cold yet solid peace with Egypt; it has fresh, new diplomatic ties with Sudan; it has full though somewhat complicated diplomatic relations with Eritrea; it has especially warm ties with Kenya; and it maintains regular diplomatic ties with Tanzania and Mozambique. Ethiopia does not have an opening to the sea, but one could also include it in the Red Sea basin region. Jerusalem has privileged relations with Addis Ababa on many levels and for many years already, including security cooperation.

Considering this long list of friends, Israel would now like to establish diplomatic relations also with Muslim Djibouti. Over the past few years, this tiny African country located on the Bab al-Mandeb straits has become a major sea military hub for world powers. France has maintained a military base in Djibouti for decades. In 2002, the United States leased Camp Lemonnier, situated outside of Djibouti city, and established there a naval base, which is the only permanent American military base in Africa. In 2016, China began constructing its own naval base in Djibouti — its first and only Chinese military installation overseas. Italy, Japan, Russia, India and Singapore also have a military presence there. Having its own opening to the Red Sea, Israel is particularly interested in joining this club.

On Nov. 25, Djibouti President Ismail Omar Guelleh addressed this issue in an interview with Africa Report, stating that Djibouti will not establish official ties with Israel without progress toward peace with the Palestinians. “We take issue with the Israeli government because they’re denying Palestinians their inalienable rights. All we ask that the government do is make one gesture of peace, and we will make 10 in return,” said Guelleh.

Still, the interesting part of the interview came later on when Guelleh said that his country does not have an issue with Jews or with Israelis. He also said that Israelis have been coming for years to his country to do business, and citizens of Djibouti have been permitted to travel to Israel for the past 25 years.

Indeed, reports over the years claimed that both countries have secret understandings on Israeli boats anchoring in the Djibouti port when necessary and for Israeli aircraft to pass through Djibouti air space if needed. Other reports claimed that following the Abraham Accords for normalization between Israel and the Emirates and Bahrain, Israel also held some contacts with Djibouti. No official sources confirmed these later reports.

Last on this list of Red Sea basin countries in which Israel would like a foothold is Muslim Somalia. The government in Mogadishu is clearly not interested in establishing ties with Israel, but leaders in self-proclaimed Somaliland, which is part of Somalia, might have a different opinion. Already in 2010, then-spokesperson of the Israeli Foreign Ministry Yigal Palmor was quoted by Haaretz Daily saying his government was ready to recognize Somaliland.

The recent Abraham Accords might push further in that direction, as the Emirates are Somaliland’s biggest development and strategic partner. On the other hand, the Emirates chose to invest in Somaliland after rupturing ties with Djibouti. Saudi Arabia also has its share of interests across the African continent. With its new friends in the Gulf, Israel might now have to recalculate its next steps in Africa.