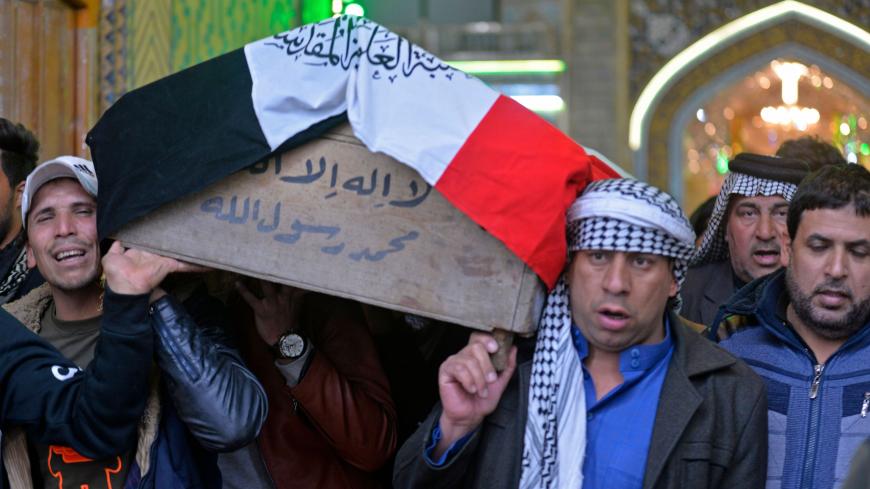 Iraqi mourners carry the coffin of a victim killed in a twin suicide bombing in central Baghdad during a funeral in the holy city of Najaf, Jan. 21, 2021. - ALI NAJAFI/AFP via Getty Images

A day after deadly dual bombings tore through a crowded market in central Baghdad, Iraqi Prime Minister Mustafa al-Kadhimi promised that the intelligence failure "would not be repeated."

Kadhimi said during an urgent meeting of the National Security Council that his government was working to develop a “comprehensive and effective security plan to meet the coming challenges" that he would personally oversee.

"What happened yesterday is a breach that we do not allow to be repeated. We promised our people to provide security," said Kadhimi, who tweeted the day before that Iraq’s response would be “bold and earth-shattering.”

Two suicide bombers detonated their explosive vests in the busy Bab al-Sharqi outdoor market in central Baghdad on Thursday, killing at least 32 people and injuring 110. In a statement posted to messaging app Telegram, the Islamic State took credit for the bombings, which the Sunni terrorist group said were meant to target Shiite Muslims.

In response to the attacks, Kadhimi fired the commander of the federal police forces, the deputy interior minister for intelligence affairs and a handful of other Iraqi security officials on Thursday, according to tweets from spokesman Yahia Rasoul.

The twin bombings — the first large-scale attack in Baghdad in three years — occurred in the same clothing market near Tayaran Square, where an IS-claimed attack killed 27 people in January 2018.

Iraqi declared victory over IS in December 2017, more than three years after the group overran the second-largest city of Mosul before capturing about a third of Iraq’s territory. In the years since its defeat, remnants of the group that remain in Sunni-dominated northern and western Iraq have continued to wage a low-level insurgency targeting security forces.

About 2,500 US troops remain in Iraq as part of the counter-IS coalition advising and training Iraqi security forces. Daniel Smith, the Joe Biden administration’s acting secretary of state, condemned the Baghdad attacks in a statement Thursday.

“They were vicious acts of mass murder and a sobering reminder of the terrorism that continues to threaten the lives of innocent Iraqis,” he said.