Iraq faces significant hurdles in transitioning to an economy without oil dependence, and future trends can be expected to exacerbate those challenges. 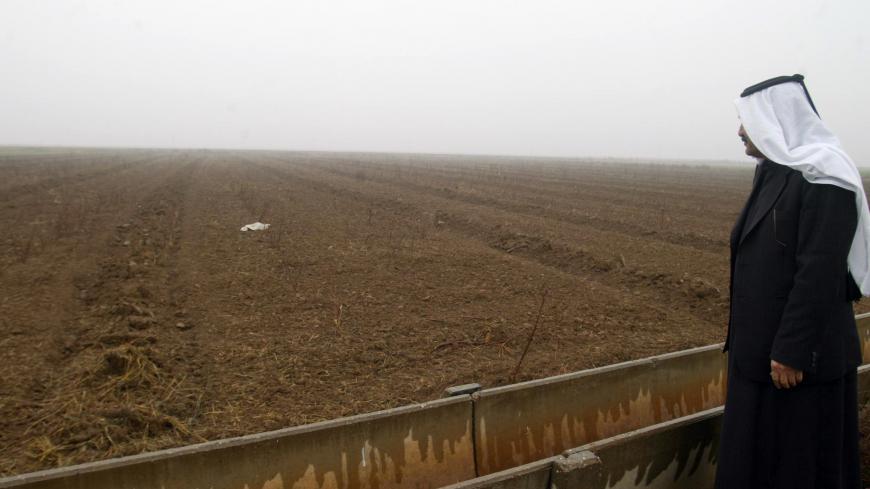 An Iraqi farmer looks at arid agricultural land in the Hawijah district of Kirkuk in northern Iraq on Jan. 29, 2011. - MARWAN IBRAHIM/AFP via Getty Images

With a stroke of his pen last Wednesday, Iraq’s President Barham Salih approved the parliament’s September vote to accede to the Paris Agreement, an international treaty to combat global warming.

As one of the last of the 197 signatory countries to ratify the deal, the move signifies Baghdad’s intent to transition from heavy dependence on oil to more renewable energy sources. Iraq’s oil production has nearly doubled over the past decade and accounts for 99% of exports and more than 90% of central government revenue.

But Iraq faces significant hurdles to transitioning to an economy without oil dependence, and future trends of a booming population, fading oil prices and growing water scarcity will exacerbate those challenges.

“Iraq’s income is getting smaller and smaller and the demand on its economy is getting bigger and bigger,” said Azzam Alwash, the founder of Nature Iraq, an environmental organization that has helped restore drained marshes in southern Iraq.

The Paris Agreement was negotiated in 2015 under the United Nations Framework Convention on Climate Change to combat global warming and greenhouse gas emissions. The agreement allows each state to set a path for climate action.

The accord is formally ratified by 191 of the 197 nations that initially signed the deal. Iran and Turkey are notable exceptions and currently the top global greenhouse gas emitters among the six that have not yet ratified, which also include Libya, South Sudan, Libya and Eritrea. Observers suggest that Tehran and Ankara have been reluctant to ratify the agreement largely because of their dependence on fossil fuels and oil production.

Washington announced its intention to withdraw from the agreement in June 2017. President Donald Trump said he would bring the United States back onboard under more fair terms. Since then, incoming US President Joe Biden, who took office on Wednesday, stated that rejoining the agreement would be a priority for his administration.

Iraq signed the Paris Agreement in 2016 but for years did not ratify it. Reaching its terms won’t be an issue as Iraq can largely chart its own milestones.

Advantages to ratifying the deal are twofold. Iraq can now receive funding through the Green Climate Fund that will help with CO2 production and stimulate the economy to jump from oil dependence to other energy sources. Ratifying the deal also encourages other countries to help Iraq make the transition.

But there are concerns that the country isn’t ready to quickly absorb such a drastic economic change. Iraq is the world’s fifth most vulnerable country to the effects of climate change, according to the Global Environmental Outlook. The report cited Iraq’s extreme temperatures, which will impact food, water, social and health security.

Demands on Iraq's resources will only increase. Iraq’s population is about 40 million, and the United Nations estimates it could be as high as 70 million by 2050. Farming communities are also diminishing as a staggering percentage of people are moving to urban areas, especially urban centers like Baghdad. Constricting basic resources further, water is becoming more scarce due to climate change, especially in the Mesopotamian Marshes that are being taken over by seawater.

Addressing the economic transformation begins with prioritizing the management of water and other resources and integrating Iraq’s economy with other sectors. However, the country remains largely focused on security and stability as well as preparing for early elections in October.

“The solutions are available,” Alwash said. “What is missing is the political will to implement the solutions.”