In his address at the United Nations General Assembly on Tuesday, Turkish President Recep Tayyip Erdogan announced the Paris Climate Agreement would be submitted to Turkey’s parliament for approval next month. 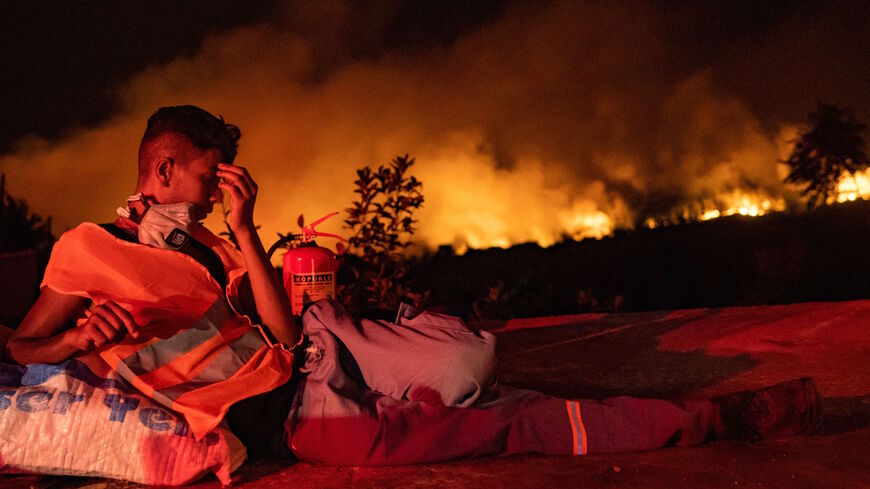 A volunteer rests as flames rise from a forest burning in the background near Akcayaka, a town in the Mugla province, in Turkey, on Aug. 6, 2021. - YASIN AKGUL/AFP via Getty Images

"Turkey is not indifferent to any global problem, crisis or call, and will also do its part on climate change and protecting the environment,” Erdogan said Tuesday.

The announcement comes five years after Ankara signed the accord that declares a nation’s intent to reduce carbon emissions in an effort to curb global climate change. But Turkey delayed its ratification to dispute its classification as a “developed economy” in the agreement’s conventions.

In recent years, the Turkish government had sought designation as a developing nation, like China and Saudi Arabia, which enables access to international funding for emission reduction efforts. Yet following a series of ecological disasters this year, environmental advocates say pressure has increased on Erdogan’s administration to take concrete steps in slowing climate change.

“This development is of critical importance for the role that Turkey will finally play to fight against the climate crisis,” Emine Ozkan, co-spokesperson for Turkey’s Green Party, told Al-Monitor.

She added, “Issues such as the floods and wildfires we have suffered this year, the economic crisis we have been through … are pressing the government from every angle.”

Currently, Turkey is one of six signatory nations, including Eritrea, Iran, Iraq, Libya and Yemen, that have yet to ratify the accord. Erdogan said a proposal would be presented next month to Turkey’s parliament, where his Justice and Development Party and coalition allies hold a majority vote. He added lawmakers would seek to ratify the agreement before the next UN Climate Change Conference begins on Oct. 31 in Glasgow, Scotland.

Calls for more stringent environmental policies have grown in Turkey after the nation witnessed some of the most severe wildfires in its history this summer, along with Greece and Italy. Blazes in Turkey’s southwestern regions caused eight deaths and burned tens of thousands of hectares of forest areas.

The fires were followed by floods in the nation’s Black Sea region this August that killed at least 77 people. Though climate change does not directly cause natural disasters, a large majority of climate scientists say higher global temperatures can fuel or worsen environmental events, which can lead to more significant damage as a result of changing weather patterns.

In addition to recent fires and floods, parts of central Anatolia continue to experience extended drought periods that have seen water levels in some lakes fall significantly, partly as a result of intensive water usage by the agriculture sector.

Combined with alarming images this spring of a sea snot outbreak in the nation’s Marmara Sea, environmental problems and climate change have taken greater precedence among Turkish citizens, some of whom are calling for new policies to mitigate further environmental damage.

A Transatlantic Trends survey conducted earlier this year found 83% of respondents from Turkey said their government should do more to slow climate change. Meanwhile, about 95% of Turkey’s youth said climate change was one of the most significant dangers facing their country, according to a recent report by the British Council.

Algedik said in addition to ratifying the Paris Agreement, the Turkish government should “urgently” shut down coal-fired power plants, stop subsidizing fossil fuel investments and redirect funds to advance energy-efficiency projects under a plan to achieve net-zero emissions by 2050.

Ersin Tek, executive director for Greenpeace Mediterranean, said pressure from the European Union may have played a role in Erdogan’s decision to move on the Paris Agreement.

“The world has passed the deadline for discussion,” Tek added. “We have literally no time to lose.”