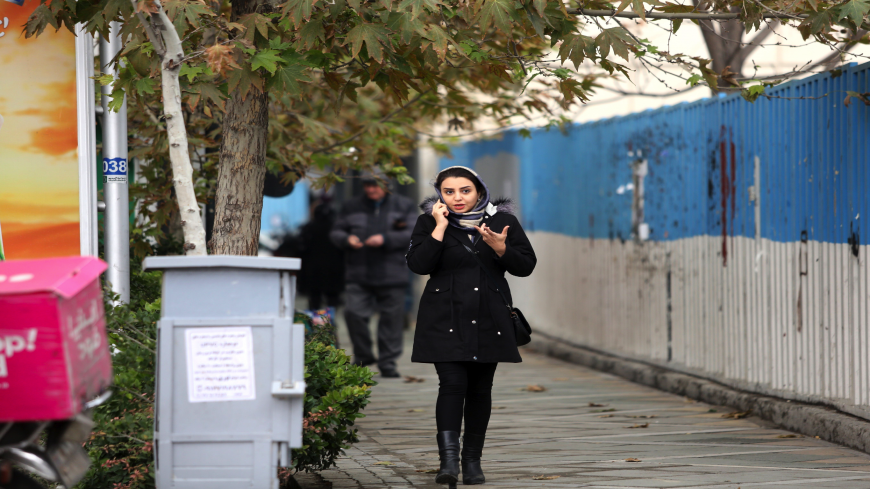 A woman makes a cell phone call while walking along a street in the Iranian capital Tehran on November 23, 2019. - Iranians have been struggling to adjust to life offline almost one week into a near-total internet blackout imposed amid violent demonstrations that has forced some to resort to old ways to get by. - ATTA KENARE/AFP via Getty Images

Jahromi was summoned last week by a Tehran court for an investigation into a host of accusations, including his “failure to implement judicial orders on banning the social media platform, Instagram.” Jahromi was released only after committing himself to attending the next stages of the proceedings.

Addressing a Cabinet meeting in Tehran on Jan. 27, Rouhani fiercely criticized the judiciary over the case. “Nobody should be put to trial over expanding the internet bandwidth,” Rouhani said. He even challenged the judiciary by declaring that if there was anyone to be investigated, it would be the president, who issued the directive on the bandwidth improvement.

Rouhani did not detail the technical aspects of the project, but he praised his young minister for “the great job” that he said will help in such areas as customs controls, thus boosting the “fight against corruption.”

In 2018, Jahromi blew the whistle on powerful financial empires who had allegedly pocketed millions of dollars by misusing government subsidies granted to cell phone imports. Ever since, the minister has been attempting to project the image of an avant-garde, anti-corruption hero. His relentless support to help open up space on Iran’s typically restricted social media has also kept him under the spotlight.

While admitting that he holds nearly no authority to lift those bans, Jahromi has managed to keep Instagram up and running. But in that struggle, the minister has been relentlessly chased by the prosecutor-general. And to Jahromi’s dismay, the conservative parliament is also in the middle of an intense attempt to pass legislation on banning Instagram, which hosts nearly half of the country’s population.

The partisan nature of the tug of war over Iran’s internet management was highlighted by government spokesman Ali Rabiee, who described the minister’s brief interrogation as “not simply a judicial or administrative process.”

Rabiee suggested that the decision was rooted in the judiciary’s political rifts with the administration regarding governance, religion and culture. He also warned that a ban on Instagram would result in “an exodus” of more than 1 million people who are earning a living through small businesses on the platform.