After Instagram suspended the purported accounts of high-ranking IRGC members, Iran's ultraconservatives are pushing authorities to ban the platform in Iran. 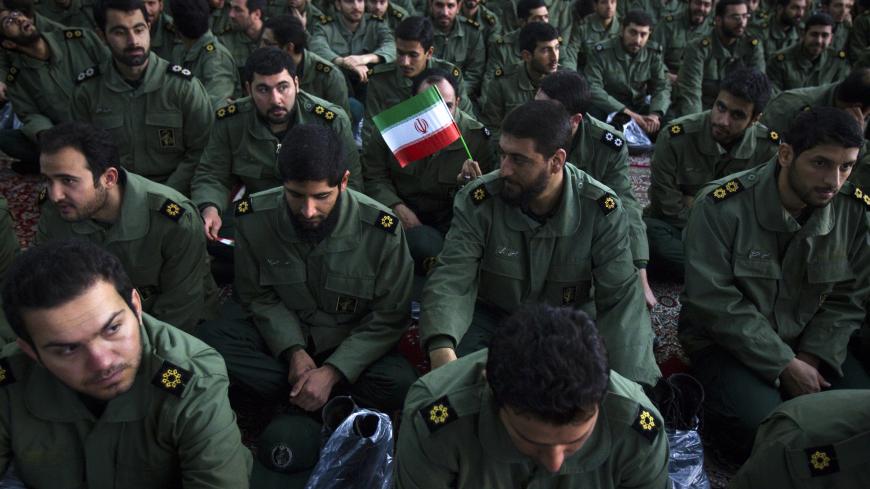 Members of the Islamic Revolutionary Guard Corps attend the anniversary ceremony of Iran's Islamic Revolution at the Khomeini shrine in the Behesht Zahra cemetery, south of Tehran, Feb. 1, 2012. - REUTERS/Raheb Homavandi

"We work with appropriate government authorities to ensure we meet our legal obligations, including those relating to the recent designation of the IRGC," a spokesperson for the social media platform told AFP.

Among the most notable accounts banned are those of IRGC commander Maj. Gen. Mohammad Ali Jafari and Maj. Gen. Qasem Soleimani, who heads the influential overseas branch, known as the Quds Force. The long list has not even spared the Iranian traffic police chief, not to mention several retired officers, such as former Tehran mayor Mohammad Bagher Ghalibaf and former head of the state broadcaster Ezzatollah Zarghami. Meanwhile, the English-language version of the supreme leader's official website on Instagram was temporarily suspended.

Since Facebook and Twitter are officially blocked in Iran, Instagram gained immense popularity among Iranians. That means its 24 million users in Iran — almost a third of Iran’s population — do not have to bother with proxy apps to log on to Instagram. Iranian political and military figures have extensively employed the platform to spread their ideological messages to domestic and international audiences. Only last week, the now-banned profile page of Soleimani posted a video clip of his strongly worded speeches against the United States. However, the Quds Force has denied that Soleimani has any social media presence, suggesting that such pages are established and moderated by supporters.

Many Instagram users have praised the IRGC’s ongoing involvement in flood relief across Iran. "The popular face of the IRGC was further portrayed through Instagram in the floods' aftermath," wrote an IRGC supporter on Twitter. "Unlike what many believe, a free flow of information on social media best serves the interests of the Islamic Revolution."

Instagram's ban on IRGC pages has triggered comprehensive debates about the platform's independence, leaving many wondering if Instagram is genuinely observing freedom of expression. "Insta-Trump" was the sarcastic portmanteau coined by the hard-line newspaper Javan. The paper, which reflects the IRGC's official views, attacked Instagram for employing "primitive measures aimed at blocking a free flow of information on social media." Elsewhere, conservative news agency Tasnim urged "an immediate tit-for-tat response" from the Iranian authorities. A similar but more straightforward suggestion was made by controversial hard-liner Hossein Allahkaram: "Instagram is one of those hostile virtual networks that have to be blocked."

While criticizing Instagram's actions, Arman, a Reformist daily, noted that individuals like Allahkaram were "fishing in troubled waters" by pushing for restrictive measures. That did not, however, silence supporters of a total ban. "The time has come for the minister of information and communications technology to adopt a practical measure in response to Instagram's violation of Iran's sovereignty," one user wrote on Twitter. But the minister, Mohammad Javad Azari Jahromi, who used the same blocked platform, did not seem to be ready for immediate action. Jahromi posted a "Game of Thrones" quote to criticize Instagram's decision: "When you tear out a man's tongue, you aren't proving him a liar, you're only telling the world that you FEAR what he might say." Yet he made no indication of future plans for reciprocal measures.

Iran's hard-liners have relentlessly called for Jahromi's head, as they claim the young minister has given too many freedoms to foreign social media networks. "In line with their policy to impose their values on others, they [Americans] enforce bans, while we do nothing to protect our identity in the face of invaders," wrote conservative political activist Vahid Yaminpour, echoing the conservatives' stance that social media networks are a threat to the Islamic Republic.

Those on the other end of the political spectrum have also attacked Jahromi, lashing out at him for implementing censorship measures. "Those who are leaders of filtering at home and cannot tolerate a schoolgirl's dance on Instagram are now playing victim after their own pages were shut down," tweeted one person, referencing the teenage girl who posted videos of herself dancing on Instagram.

Facebook, which owns Instagram, is expected to follow suit in banning IRGC pages. Accusations that Instagram is practicing double standards and advancing a political agenda gained further momentum when the ban targeted non-IRGC figures, among them Chief Justice Ebrahim Raisi, a conservative cleric who lost the 2017 presidential race to Hassan Rouhani.

As far as Instagram is concerned, Iran's top decision-makers have always been stuck between a rock and a hard place. It still remains unclear whether Iranian official are set on implementing a total ban of the platform. Considering this, Instagram might have just cut the thin hair that was holding the sword of Damocles over its head.