President Hassan Rouhani also said that “those who in two weeks will have power in the White House must return America, which is a great nation, to its rightful place.” 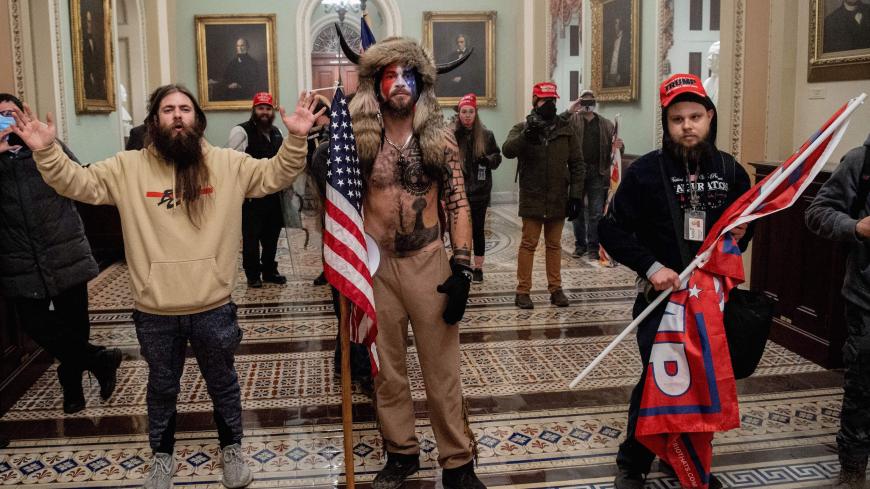 Supporters of US President Donald Trump, including Jake Angeli (C), a QAnon supporter known for his painted face and horned hat, enter the US Capitol on Jan. 6, 2021, in Washington, DC. - SAUL LOEB/AFP via Getty Images

The storming of the US Capitol by pro-Trump protesters to disrupt the electoral college vote count to certify President-elect Joe Biden's victory has sparked interest and coverage by media outlets across the world. Fewer countries were more interested in the events that took place than Iran.

During a speech today, President Hassan Rouhani talked about the chaos in Washington, DC. “You saw what happened in the United States; what we saw is how false and fragile Western democracy is and how it does not have a strong foundation,” Rouhani said. He added that, despite being able to make progress in other areas in their country, “a populist was able to strike such a blow to his own country and our region.”

Rouhani continued, “You see what happens when an unhealthy person comes and acquires power and what problems he creates for his country, and I hope this is a lesson for the next people to occupy the White House.” He added, “Those who in two weeks will have power in the White House must return America, which is a great nation, to its rightful place.”

According to Rouhani, the United States should return to “reason and lawfulness” when it comes to international issues, adding that those who are “semi-literate or are pursuing the interests of their family” should be removed from administrative positions at the heads of institutions in the country.

When President Donald Trump took office, he vowed to exit the 2015 nuclear deal known as the Joint Comprehensive Plan Action, which was signed under President Barack Obama. In 2018, Trump reapplied economic sanctions on Iran, severely limiting their ability to sell their oil and conduct financial transactions with countries in Europe and Asia. Trump argued that he wanted a better deal while Iran maintained their position that the JCPOA, which was signed between Iran and the five permanent members of the United Nations Security Council plus Germany, was an international agreement and was not renegotiable.

The economic pressure took a large toll on Iran, and tensions between the two countries reached a peak when Trump ordered the assassination of Quds Force commander Maj. Gen. Qasem Soleimani. Iran retaliated with launching missiles at a US base in Iraq.

While the United States continued to add more sanctions on Iran, Tehran continued to take steps away from the nuclear deal. Most recently, Iran announced that it has begun enriching uranium to 20% at its Fordow fuel enrichment plant. Under the JCPOA, Iran’s enrichment level remained below 5% and no enrichment at Fordow would take place for another decade. Iran’s announcement of 20% was in line with the country’s parliament bill called “Strategic Action to Remove Sanctions.” Iran has clarified on numerous occasions that all the steps away from the nuclear deal are reversible, and if Biden reenters the JCPOA, Iran will reverse their nuclear steps. Behrouz Kamalvandi, spokesperson for Iran’s Atomic Energy Organization, said today that Iran is even capable of enriching at 90% if it desires to do so.