Egypt inaugurates the restored Temple of Isis in Aswan as part of the government’s efforts to revive the tourism sector. 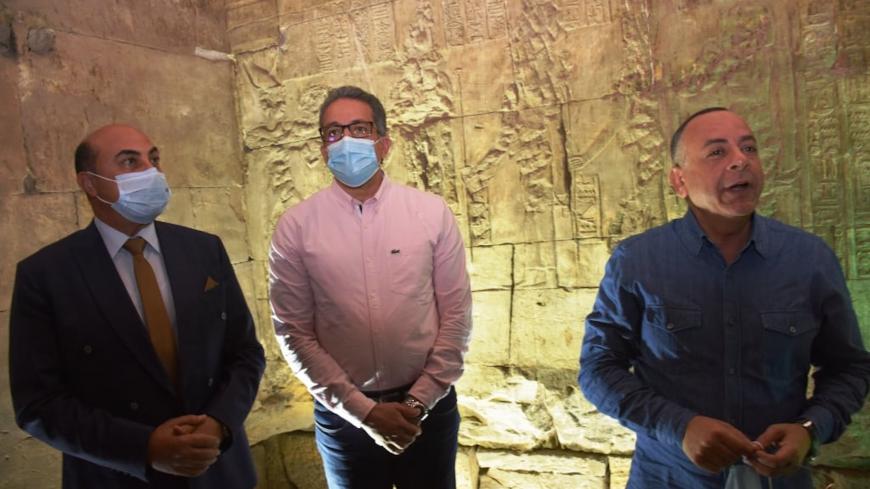 The more than 2,200-year-old Ptolemaic temple, located in a residential area in the center of Aswan, was discovered in 1871 during the extension of a railway line. (It is not to be confused with the much larger and older Temple of Isis that was moved piece by piece to nearby Agilkia Island from Philae Island in the 1970s after flooding from the Aswan High Dam south of Aswan threatened to destroy the archaeological treasure.)

The work for the 19-meter-long (62-foot) temple in the city of Aswan included restoring its floors and columns, cleaning bird and bat poop from its walls and installing window screens to prevent birds and bats from getting back inside. Also, the inscriptions on the entrance to the sanctum have been restored and soot was removed from the temple ceiling. The drawings and colors at the entrance to the temple and the side door were cleaned, as were the offering tables in the Hypostyle Hall, officials said.

Mustafa Waziri, the secretary-general of the Supreme Council of Antiquities, said the temple's importance lies in the fact that it was established during the 246-222 B.C. reign of King Ptolemy III for the worship of the goddess Isis and the triad of Aswan (Khnum, Satis and Anuket). The temple was built with sandstone and has two doors. The main door is crowned with ornamentation topped by a winged sun disk, and it is through this door that visitors enter a hall with three open rooms, he said.

Ayman Ashmawy, head of the Egyptian Antiquities Sector at the Supreme Council of Antiquities, told Al-Monitor by phone that authorities came up with routes for visitors to follow and installed a modern lighting system to highlight the temple's aesthetics.

He added, “The restoration and development works sought to provide various services to visitors, such as signboards and explanations, visitor centers, toilets, umbrellas, benches, rubbish bins designed for collecting recyclable waste, and brochures and leaflets that are available both in Arabic and English. Also, people with special needs have been provided with special tracks, offered booklets in Braille, films with sign language and coronavirus guide boards.”

Abdel Moneim Saeed, the director general of the Aswan and Nubia Antiquities Sector, said that the Supreme Council of Antiquities carried out excavations with a depth of 2 meters (6½ feet), including in the sanctum and the temple hall, and that this led to the discovery of small pottery vessels. He said excavations also were carried out on the northwest side of the temple courtyard, where some red brick walls were discovered.

In recent years, the Swiss mission handling excavations in Aswan decided to use the temple as a warehouse, which drew renewed attention to the importance of the site and the need to breathe new life into it.

Fethiye al-Hefni, the supervisor of the Isis Temple restoration project, told Al-Monitor over the phone that she obtained approval in January 2019 to start the restoration process.

“Since our first visit, we understood the value of the archaeological temple, and we came to the realization that once inaugurated, it was bound to turn into a destination for Egyptians and foreign tourists in Aswan governorate. … The 26-member restoration team embarked on the first stage of the restoration works, as they closed the windows to prevent birds and bats from entering the ancient site,” she said.

“Safe mechanical brushes and scalpels were used to deal with antiquities, but we additionally used restoration chemicals to be able to eliminate the poop and the dense [bat] blood stuck on the walls,” she continued.

Hefni said she believes a group of Christian priests lived in the temple in the sixth century, as evidenced by the presence of crosses on the columns, altars and engravings across the rooms, and drawings on the outer wall of the place.