Saudi Arabia, the United Arab Emirates and Bahrain have already announced the end of their bans on flights from Qatar. 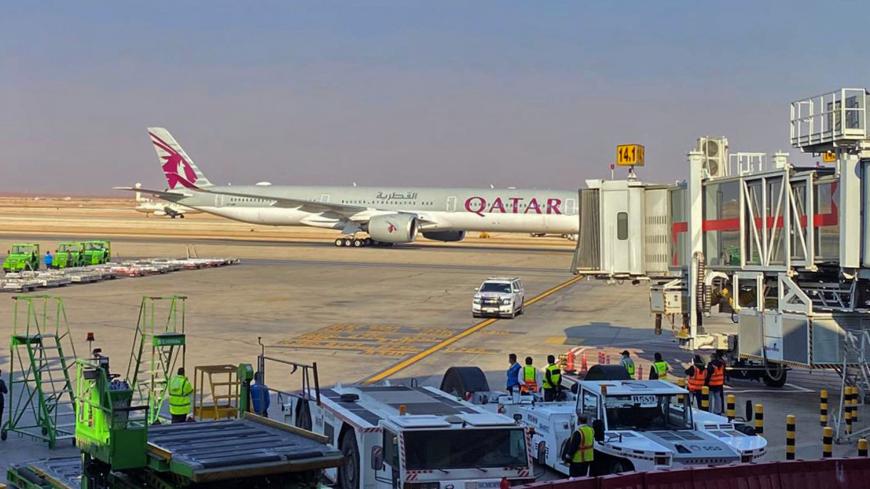 Staff at King Khalid International Airport in the Saudi capital, Riyadh, wait for passengers to disembark from a Qatar Airways plane that had just arrived from Hamad International Airport near the Qatari capital, Doha, on Jan. 11, 2021, the first commercial flight between the two countries in 3½ years following a Gulf diplomatic thaw. - FAYEZ NURELDINE/AFP via Getty Images

Egypt reopened its airspace to flights from Qatar, state media reported Tuesday, in a further easing of its row with the Gulf state.

The head of Egypt's Civil Aviation Authority, Ashraf Noweir, told Ahram Online that Egypt had signed off on a request for Qatari aircraft to fly over Egyptian airspace. Noweir added that aviation authorities were waiting on flight schedules from EgyptAir and Qatar Airways.

A Qatar Airways flight will land in Cairo on Friday, airport officials told The Associated Press. The flight would be the first between the two countries since Egypt joined Saudi Arabia, the United Arab Emirates and Bahrain in imposing an air, land and sea embargo on Qatar in June 2017. The Saudi-led bloc also severed diplomatic relations with the gas-rich country, accusing it of funding terrorism and backing its regional rival Iran.

Qatar denied the allegations and refused to comply with the quartet’s 13 conditions for lifting the 3½-year blockade, including cutting ties with Iran and shutting down the Qatari-funded Al Jazeera TV network.

Kuwait and the Trump administration helped broker an end to the diplomatic crisis. A deal to restore relations with Qatar was reached during the annual summit of the six-member Gulf Cooperation Council, which was held Jan. 5 in the Saudi desert city of Al-Ula. A day before, Saudi Arabia agreed to lift its yearslong blockade of Qatar.

A commercial plane landed in Saudi Arabia from Qatar’s Doha Airport on Monday in the first direct flight since 2017. The same day, Bahrain opened its airspace to Qatar, the state-run Bahrain News Agency reported.

The UAE reopened its land, sea, air ports to Qatar over the weekend, but the Emirati foreign minister warned that establishing diplomatic relations with its former regional rival could take longer.