Leaders across the region responded with alarm to the violence that unfolded at the US Capitol. 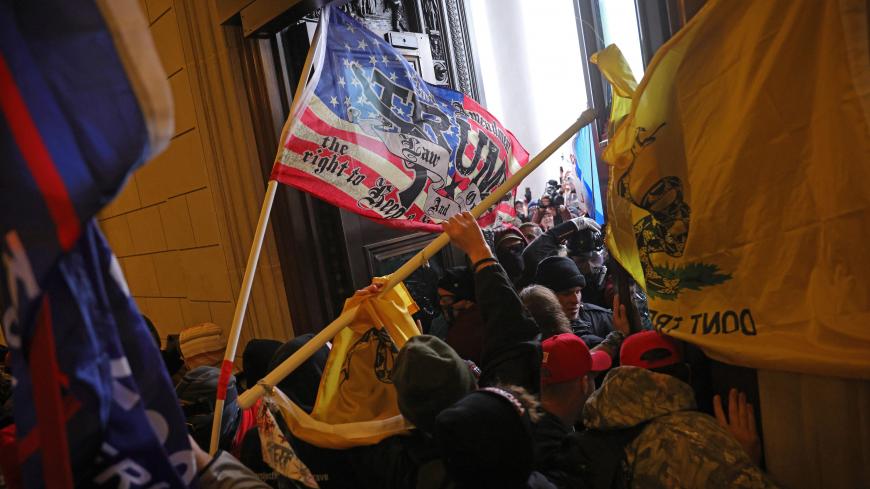 Protesters supporting US President Donald Trump break into the US Capitol on Jan. 6, 2021, in Washington, DC. - Win McNamee/Getty Images

The unprecedented scenes of violence in Washington on Wednesday drew a mix of shock, sadness and thinly veiled schadenfreude in the Middle East, with adversaries and allies alike condemning what many described as an assault on American democracy.

In Israel, Prime Minister Benjamin Netanyahu called the rampage “a disgraceful act.” The Israeli leader, who has enjoyed a warm relationship with outgoing President Donald Trump, spoke alongside US Treasury Secretary Steven Mnuchin, who was in Jerusalem.

“American democracy will prevail. It always has,” Netanyahu said.

Israeli Defense Minister Benny Gantz tweeted, "The photos from Washington hurt the heart of anyone who believes in democracy.” Foreign Minister Gabi Ashkenazi tweeted he was "shocked" by the attack on the world’s “beacon of democracy.”

For former Palestinian official Hanan Ashrwai, the attack was proof that “despots everywhere thrive on repression, oppression, & violence.” She went on, "While people in Palestine & in many other places in the world are struggling to achieve democracy, there are those in the US who are actively sabotaging theirs."

A mob of Trump supporters stormed the US Capitol on Wednesday afternoon, forcing their way into the building as lawmakers were voting to formalize the presidential election results. Trump has maintained without evidence that the vote was fraudulent, a claim he repeated as the night dragged on.

At least four people died in the unrest and as of Thursday morning, police had made 52 arrests and found a number of firearms, two pipe bombs and a cooler containing Molotov cocktails.

Some saw the violent mayhem that unfolded Wednesday as an opportunity to chastise the United States. Iran’s President Hassan Rouhani said the "calamities," which he blamed squarely on Trump, demonstrated “how fragile and vulnerable Western democracy is.”

Tensions between the United States and Iran are running high over the anniversary of Iranian commander Qasem Soleimani’s assassination and the Trump administration’s widening sanctions campaign on Tehran.

“When a sick person takes office, we see how he disgraces his country and creates trouble for the world,” Rouhani said of Trump in a televised address Thursday.

Turkey was among the first countries to respond as rioters challenged police in the nation’s capital on Wednesday. The NATO ally urged restraint — advice some found laughable given the violent clash between protesters and President Recep Tayyip Erdogan’s bodyguards outside the ambassador’s DC residence in May 2017.

“We believe the U.S. will overcome this internal political crisis in a mature manner," the Foreign Ministry said.

Turkey's parliament speaker Mustafa Sentop struck a similar tone. “We believe that problems will always be solved within law and democracy,” he tweeted. "As Turkey, we have always been in favor of the law and democracy and we recommend it to everyone."

A number of Middle East countries whose governments the Trump administration has criticized for human rights abuses reacted to the storming of the US Capitol with alarm. Saudi Arabia, Turkey and the United Arab Emirates issued statements on Twitter telling their citizens to avoid the protest area and abide by the curfew order set by the city’s mayor.