Gen. Kenneth McKenzie is scheduled to stop in Israel later this week as the Joe Biden administration seeks strategic dialogue to build on the Abraham Accords. 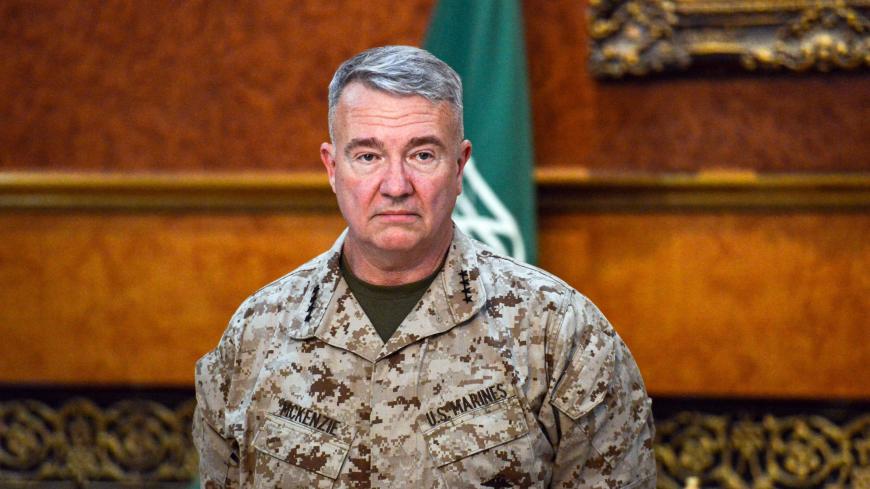 US Marine Corps Gen. Kenneth F. McKenzie Jr., commander of the US Central Command, poses for a picture during his visit to a military base in al-Kharj in central Saudi Arabia on July 18, 2019. - FAYEZ NURELDINE/AFP via Getty Images

The commander of US military forces in the Middle East, Gen. Kenneth “Frank” McKenzie, arrived in the region this week with plans to stop in Israel as the Joe Biden administration seeks strategic dialogue regarding Iran.

The Israeli press reported that McKenzie would meet with officials this coming Thursday. McKenzie’s arrival will mark the first US official visit to the Jewish State under the Biden administration and the general’s first since the Pentagon announced Israel would be incorporated into the US Central Command’s geographic region of responsibility.

Both the Pentagon and CENTCOM, which McKenzie leads, remained tight-lipped about the general’s trip abroad, in keeping with security precautions amid renewed threats by Iran’s leaders against American officials for the US killing of Quds Force commander Maj. Gen. Qasem Soleimani in Baghdad last year.

The general hinted at the Pentagon's latest regional priorities in comments to Defense One on Sunday, calling the former administration’s efforts to convince Arab leaders to normalize ties with Israel “a good thing” and saying the United States was entering a “period of opportunity” to reorient its stance toward Tehran.

Why it matters:  US national security adviser Jake Sullivan assured his Israeli counterpart Meir Ben Shabbat during a phone call on Saturday that the Biden administration would continue to build on the Donald Trump administration’s Abraham Accords. Sullivan also suggested the United States and Israel initiate “strategic dialogue in the near term.”

McKenzie, who has pushed hard to maintain CENTCOM’s influential role as the Pentagon shifts focus to East Asia, is leaving his mark as the new administration’s first emissary to Israel as Washington prepares to reapproach relations with Tehran.

What’s next:  McKenzie visited Saudi Arabia on Monday and may make further stops in the Gulf.

His visit to the region comes as Israel opened an embassy in the United Arab Emirates for the first time, and as Israeli officials signed off on eventual US deployment of the Iron Dome missile defense system to bases in the Gulf, Haaretz reported.

Know more:  Rina Bassist has updates on Israel’s overt relations with the UAE, Morocco and Bahrain, and Ben Caspit interviews Dani Dayan, Israel’s former consul general in New York, about opportunities presented by the Biden era.