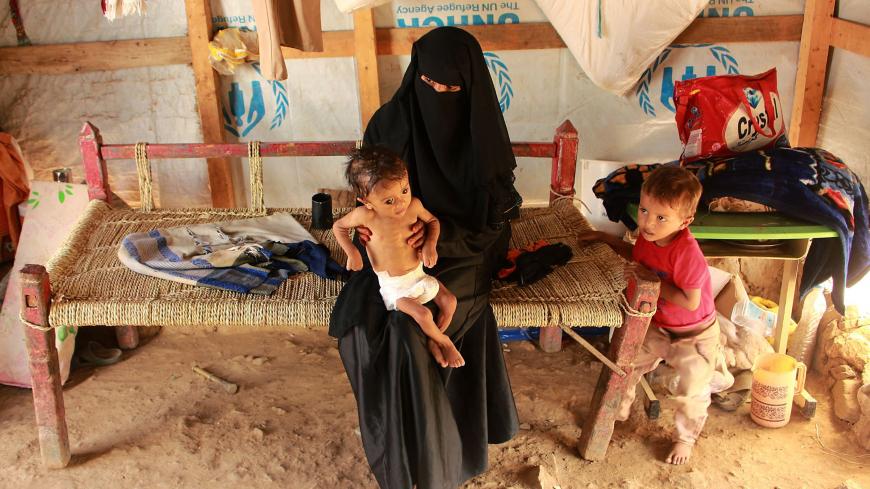 Hashem Mahmoud Atin, a 10-month-old displaced Yemeni child suffering from acute malnutrition who is unable to reach a hospital for treatment, is held by his mother at a camp in Abs in northern Yemen's Hajjah province on Sept. 3, 2020. - ESSA AHMED/AFP via Getty Images

Relief organizations working in Yemen are urging Congress to speak out against the Donald Trump administration’s plan to designate the Houthis as a terrorist organization, warning that such a move could have drastic humanitarian consequences in a country on the brink of famine.

“A formal US terrorist designation would exacerbate humanitarian needs, further devastate Yemen’s economy, and hamstring the ability of humanitarian agencies to respond,” read the letter sent Thursday to congressional leaders.

A coalition of 29 relief groups including the Norwegian Refugee Council, Oxfam America and the International Rescue Committee, called on US lawmakers to use their leverage to “help prevent millions of Yemenis from facing another year of violence, starvation, and disease.”

The State Department is considering designating the Houthis as a “foreign terrorist organization” in what observers say is a continuation of the Trump administration’s maximum pressure campaign on the Houthis' regional backer, Iran. The label would criminalize material support for the rebel group, which is embroiled in a years-long war with Saudi-backed pro-government forces.

Because the Houthis are the de facto authorities over a part of Yemen in which 80% of the population lives, distributing food and medicine to civilians in that area requires a degree of coordination between relief organizations and Houthi-run government agencies. A terror designation would make it difficult for aid agencies to continue engaging with those authorities without opening themselves up to possible criminal prosecution.

Why it matters:  The civil war in Yemen has killed more than 100,000 people since 2015 and created what the United Nations calls the world's worst humanitarian crisis. UN figures released this week show almost half of Yemen's population is experiencing high levels of acute food insecurity, a number expected to rise in the coming months.

A Houthi designation could hamper efforts to bring food, fuel and cash into the country if banks decide it’s not worth the risk to provide services and relief workers warn it could also deter foreign donors at a time when contributions to Yemen are at record lows.

At a minimum, the aid groups say a designation would bring “new barriers and constraints to the already complex operating environment in Yemen,” delaying the time it takes to deliver aid to those who need it. Should the State Department go through with the designation, the relief organizations are asking for waivers that would allow them to continue their work without the danger of being prosecuted for it.

What’s next:  The incoming Joe Biden administration had already pledged to end military support for the Saudi-led coalition in Yemen, including logistical assistance and intelligence sharing. The aid agencies are asking Congress to take it one step further by halting arms sales to Saudi Arabia and the United Arab Emirates, whose airstrikes rights groups say are responsible for a majority of the war’s civilian casualties.

Trump has previously vetoed congressional efforts to block arms sales and his administration recently notified Congress that it plans to sell the UAE $23 billion worth of F-35 fighter jets and other advanced weaponry.

The aid agencies are also asking Congress to publicly call for the restoration of humanitarian funding to Houthi-controlled northern Yemen. The Trump administration slashed it this spring over concerns the rebels were interfering with the distribution of aid. As a result, the cash-strapped relief groups say they’ve been forced to scale back their water, sanitation and health programs in the region.

Know more:  Elizabeth Hagedorn has more on how a Houthi terrorist designation could hamstring relief organizations on the ground in Yemen.