More than 20 people — but no arriving Cabinet officials — were reported killed. 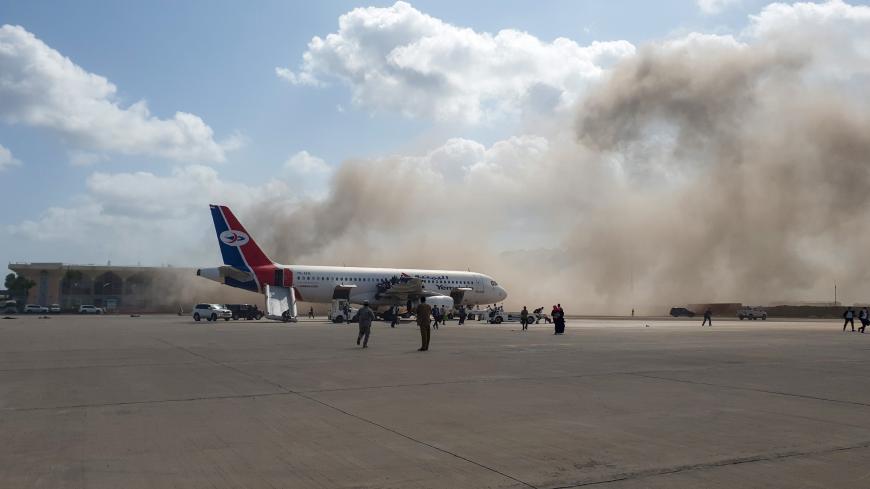 Smoke billows at the Aden Airport on Dec. 30, 2020, after explosions rocked the Yemeni airport shortly after the arrival of a plane carrying members of a new unity government.

Yemeni authorities said at least 22 people were killed and 50 wounded in an attack on Aden’s airport as members of the country’s newly formed unity government arrived from Saudi Arabia’s capital Wednesday.

An explosion struck the airport and gunfire broke out as people gathered on the nearby tarmac to witness the arrival of Yemen’s prime minister and newly appointed Cabinet members as they disembarked from a plane after being sworn in earlier this week in Riyadh.

Cabinet members were swept into vehicles and delivered to Aden’s Mashiq Palace. A subsequent explosion was later reported nearby, though no members of the government were reported to have been hurt, according to The Associated Press. An official told the news agency that the airport attack may have been caused by a drone or drones.

Martin Griffiths, the United Nations’ special envoy for Yemen, and the Arab League condemned the violence. No group has yet claimed credit for the attack.

The New York Times quoted officials and others who said that at least one staff member of the International Committee of the Red Cross was killed, as well as a TV news reporter and deputy transportation minister apparently on hand to witness the Cabinet officials' arrival.

After years of political divisions, Yemeni President Abed Rabbo Mansour Hadi last week announced that the government’s new Cabinet  would include members of the separatist Southern Transitional Council and the rival Islah party, an Islamist faction long opposed by the council and its main backer, the United Arab Emirates.

The breakthrough was a promising sign in what has long been thought of as an intractable dispute within Yemen’s government, which is backed by Saudi Arabia and the UAE in its flagging fight against the country’s northern Houthi rebels, who have ties to Iran.

Hadi ordered government officials to relocate to Aden this week to take their oaths of office.

Saudi Arabia’s ambassador to Yemen, Mohammed al-Jaber, condemned the attack but said the cooperation agreement brokered by Riyadh would not be broken, the AP reported.