US Special Envoy for Syria Joel Rayburn says the blame for Syria’s economic and humanitarian crises rest with Assad, not the US, after Alena Douhan of the UN Human Rights Council said the Caesar Act is hurting Syrians' chances to rebuild infrastructure and live comfortably. 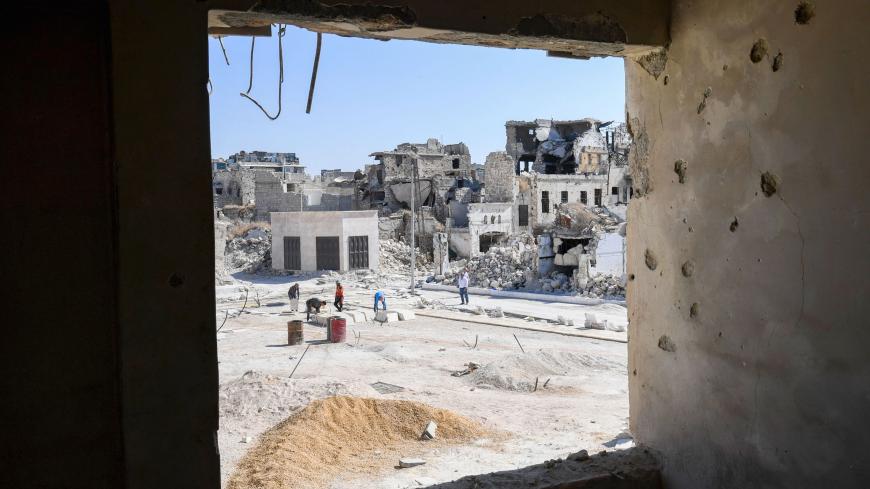 Syrian workers take part in the reconstruction of Hatab Square in Aleppo's Old City on Oct. 17, 2020. - AFP via Getty Images

A statement released by US Special Envoy for Syria Joel Rayburn "categorically" rejected claims by the UN Special Rapporteur blaming Syria’s economic and humanitarian crisis on US sanctions.

The blame is not US policy, but rather Syrian President Bashar al-Assad’s "brutal war" against his own people, said Rayburn in a statement posted on the US Embassy in Syria website.

A United Nations human rights expert had said on Tuesday that US sanctions on Syria are making it harder for people in the war-torn country to rebuild their lives.

Alena Douhan of the UN Human Rights Council said the US Caesar Act is worsening living conditions in Syria.

“What particularly alarms me is the way the Caesar Act runs roughshod over human rights, including the Syrian people's rights to housing, health, and an adequate standard of living and development,” she said in a press release.

The United States instituted new sanctions on Syria under the Caesar Act in June. The law built on previous sanctions and targets the Syrian government and any entities or persons that work with it. It is aimed at deterring financial support for Assad, who is fighting rebel groups in the country’s civil war with Iranian and Russian help. The United States says the sanctions do not aim to hurt civilians.

"The Caesar Syria Civilian Protection Act and other targeted sanctions on the Assad regime and its supporters seek accountability for the regime’s atrocities and to cut off the resources Assad uses to fuel the conflict," Rayburn explained. "They do not target humanitarian-related trade, assistance or activities. As such, these recent sanctions work to promote human rights in Syria."

At the time the Caesar sanctions were enacted, the Syrian economy was already reeling and there were protests in the government stronghold of Suweida. The economic situation remains bleak. The currency has plunged this year, and food prices have gone up dramatically.

Critics say the sanctions hinder Syria’s efforts to rebuild after years of war. For example, US sanctions on Syria’s central bank make it more difficult for the country to receive aid, according to Douhan.

“The U.S. government must not put obstacles in the way of rebuilding of hospitals because lack of medical care threatens the entire population's very right to life,” she said.

Rayburn pointed to UN reports that the blame for Syria’s tragedy rests with the Syrian government, not the United States.

"The UN has shown the world the substantial evidence that the Assad regime and its foreign enablers have dropped bombs impacting hospitals, schools, markets, and homes."

Douhan is not alone in her criticism. Many others criticize the US government and Europe as well for imposing the sanctions, considering the level of hardships in Syria. In August, the UK-based Humanitarian Aid Relief Trust said that US and European Union sanctions on Syria were hurting civilians.

“It is now the citizens who suffer from the resulting lack of investment in basic services and infrastructure,” said the humanitarian organization. “Their own efforts to help themselves and re-build their lives are hampered by sanctions.”

Some US analysts have also argued the sanctions will not deter Assad and will only hurt innocent Syrians.

Rayburn characterized the UN claims as "misguided and false" in his statement.

"Sanctions are a tool that can be used to promote human rights, not violate them, and our sanctions programs are generally not targeted at humanitarian assistance," he stated. "While the Assad regime blocks aid, the United States works with UN agencies and NGOs to ensure humanitarian support from the international community reach the Syrian people."

The US has provided over $12 billion in aid to Syria since the start of the war, including nearly $143 million to assist with the COVID-19 pandemic.

Earlier this month, a State Department official told Congress that the administration would continue adding sanctions before it leaves office in January. The official also said the sanctions had a “chilling effect” on foreigners who would have otherwise resumed economic relations with Syria.

Update: Dec. 31, 2020. This article has been updated to reference the statement by US Special Envoy for Syria Joel Rayburn.