US Syria envoy Joel Rayburn also told Congress that non-Syrians could soon be sanctioned under the Caesar Act. 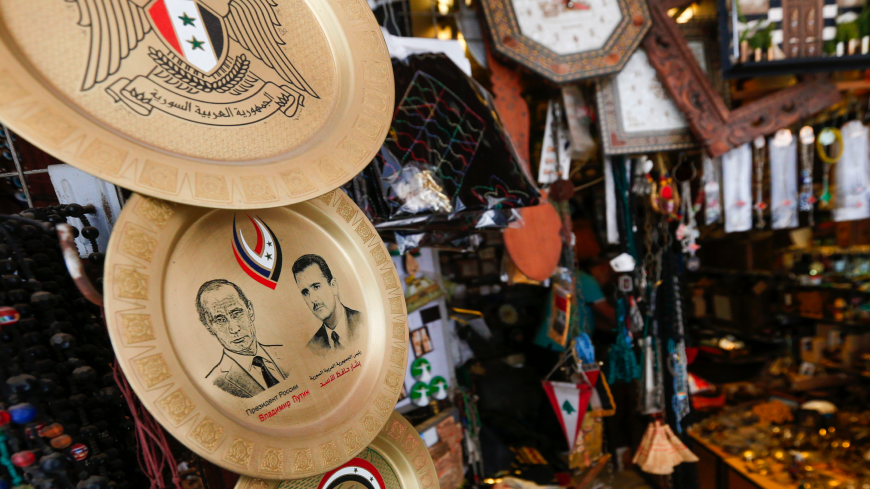 Souvenir plates bearing the Syrian flag and the portraits of Russian President Vladimir Putin and Syrian President Bashar al-Assad are pictured in a shop in a bazaar in old Damascus, on June 16, 2020. The Caesar Syria Civilian Protection Act of 2019, a US law that aims to sanction any person who assists the Syrian government or contributes to the country's reconstruction, comes into force June 17. - LOUAI BESHARA/AFP via Getty Images

A State Department official told Congress today that the US government could add further Syria-related sanctions before US President Donald Trump leaves office, including on non-Syrians.

The Caesar Syria Civilian Protection Act took effect in June and has led to sanctions on a number of Syrians with alleged ties to the government of President Bashar al-Assad. The goal of the act is to sanction people and entities who enable human rights violations from the Syrian state. The act also targets those seeking to profit from reconstruction plans in Syria. Some of the most recent sanctions include Syrian financial and intelligence officials in September.

US special envoy for Syria Joel Rayburn testified at a House Foreign Affairs Committee hearing on Wednesday on Syria policy. Committee chairman Eliot Engel started the hearing by asking Rayburn why non-Syrians, with the exception of two Lebanese shipping companies, have not been sanctioned under the act.

“The goal of the legislation was to pressure Assad’s international support system and raise the cost of bankrolling the wholesale slaughter of Syrian people,” said Engel, who criticized people in Russia in particular for working with the Syrian government.

Rayburn said sanctioning non-Syrians is an option but that non-Syrians are already affected by the law.

“We certainly will, I think, extend Caesar Act designations to non-Syrians in the future,” said Rayburn. “The Caesar Act has had a remarkable chilling effect on those outside Syria who might have otherwise restored economic relations with the Assad regime.”

“I can’t specify specifically what sanctions we’ll do in the coming weeks, but we are intending to do some,” said Rayburn.

Ranking member Rep. Michael McCaul, R-Texas, also expressed concerns about the actions of Turkish-backed rebel groups in northern Syria and repeated allegations that Turkey is using former Islamic State fighters there. Rayburn said the United States has discussed reports of extremist fighters with Turkey and the Syrian opposition in response.

“When we see signs that there are some elements that are potentially extremist, then we raise that with our Turkish counterparts,” said Rayburn. “We also raise that with the Syrian political opposition.”

Rep. Gregory Meeks, a New York Democrat who will succeed Engel as committee chairman in January, also spoke at the hearing. He criticized the Trump administration’s actions regarding Russia in Syria.

“The administration has failed to stand up to Russia and has enabled Putin’s expanding zone of influence in the region,” said Meeks.

Rayburn also addressed the issue of missing Americans in Syria, specifically Austin Tice and Majd Kamalmaz. Tice, a journalist and former US Marine, went missing in 2012 while reporting in the country. Kamalmaz, a psychologist and dual Syrian-US citizen, has not been seen since being stopped at a checkpoint in Damascus during a 2017 visit to the country. Last month, Tice’s mother, Debra, said “we’ve never been closer to having Austin home” in an interview with Fox News and called on Trump to continue efforts to secure his release.

“The United States government will continue to work for the return of Austin Tice and every other American who is held hostage or wrongfully detained in Syria,” said Rayburn. “And we will not give up on those objectives.”