The US administration has blacklisted the commander of Syria's military intelligence organization, a senior aide to President Bashar al-Assad and Assad's British in-laws. 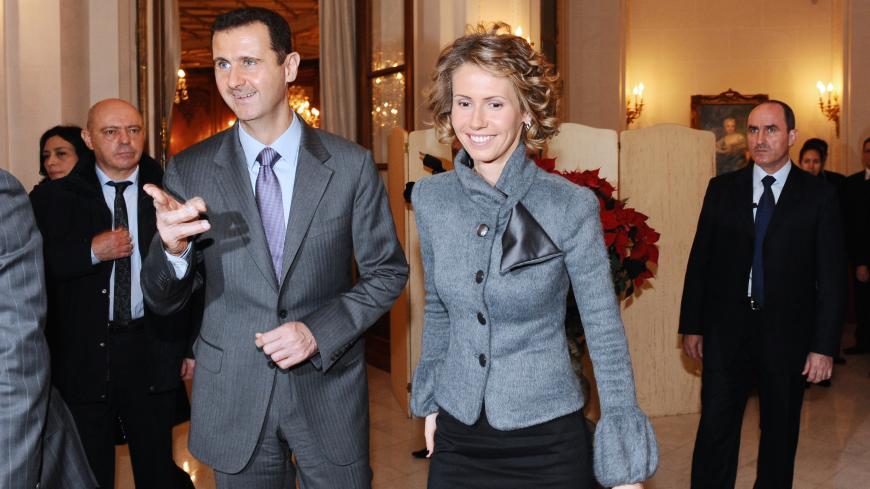 Syrian President Bashar al-Assad (foreground L) and his wife Asma visit the exhibition dedicated to French painter Claude Monet at the Grand Palais on Dec. 11, 2010, in Paris at the end of their official visit in France. - MIGUEL MEDINA/AFP via Getty Images

The Trump administration issued a fresh round of sanctions on Syria Tuesday, targeting the country’s central bank, a close aide to the president and several of the first lady’s London-based relatives who Washington accuses of enabling the Syrian government.

The new wave of sanctions is the latest US effort to hold Syrian President Bashar al-Assad and his inner circle accountable for widely documented human rights violations and deprive the regime of the resources needed to continue perpetrating them. The Central Bank of Syria, which was already subject to US sanctions, was added to Treasury Department’s list of specially designated nationals on Tuesday for its “deep banking ties to Iran.”

Officials also unveiled sanctions on Lina al-Kinayeh, one of Assad’s key advisers who previously headed the first lady’s office. Her husband, Syrian member of parliament Mohammed  Masouti, and their business entities were also targeted. The commander of Syria’s military intelligence organization, General Kifah Moulhem, was blacklisted “for his role as one of the architects of the Syrian people’s suffering.”

The sanctions freeze any US-held assets of those designated Tuesday and bans them from entering the United States. Non-Americans who engage in certain transactions with them risk secondary sanctions.

Separately, the State Department announced sanctions on Syrian First Lady Asma Assad’s parents and brothers, all dual UK-Syrian citizens who reside in London. Leaked emails from 2012 showed Fawaz al Akhras, an interventional cardiologist, advising his son-in-law on how to spin the Syrian government's brutal crackdown in the international media.

Both Asma and Bashar al-Assad were hit with US sanctions earlier this summer and on Tuesday, the State Department expanded sanctions on Assad’s wife for “impeding efforts to promote a political resolution.”

“The Assad and Akhras  families have accumulated their ill-gotten riches at the expense of the Syrian people through their control over an extensive, illicit network with links in Europe, the Gulf, and elsewhere,” Secretary of State Mike Pompeo said in a statement Tuesday.

“Meanwhile, the Syrian people continue to wait in long lines for bread, fuel, and medicine as the Assad regime chooses to cut subsidies for these basic essentials that Syrians need,” he said.

Syria's president has described the American sanctions as “economic warfare” against his country, which saw its currency plummet to record lows this summer. US officials say the sanctions campaign is not intended to harm the Syrian people or deter much-needed humanitarian assistance.

Nearly a decade of war between Assad’s forces and the opposition has left hundreds of thousands dead and forced millions more to flee their homes. The United Nations reports rates of food insecurity and malnutrition are on the rise, with an estimated 80% of displaced families across Syria now saying their income doesn’t cover their basic needs.

The latest sanctions arrive as the United States approaches one year since President Donald Trump signed the Caesar Act, a bipartisan law named for the military defector who smuggled out of Syria’s prisons photographic evidence of torture and murder. The much-anticipated law, which took effect this June, authorizes broad penalties against anyone who provides support for the regime’s military operations or knowingly does business with the government.

Joel Rayburn, the US special envoy for Syria, told reporters Tuesday that Assad and his allies “have no answer” for the constraints placed on them by the Caesar Act.

“Don’t underestimate the power of economic pressure combined with political isolation, ” Rayburn said during a phone briefing. “This over time can have a very severe effect.”

"We will not normalize relations with the Assad regime, nor help Assad rebuild what he has destroyed,” he added.

President-elect Joe Biden is expected to maintain the sanctions on Syria. His nominee for secretary of state, Antony Blinken, has previously expressed regret over the Barack Obama administration’s handling of the Syrian crisis and recently described the Caesar Act as a "very important tool” in trying to shape the regime’s behavior.