The State Department report said the estimated net worth of President Bashar al-Assad and his family was between $1-2 billion. 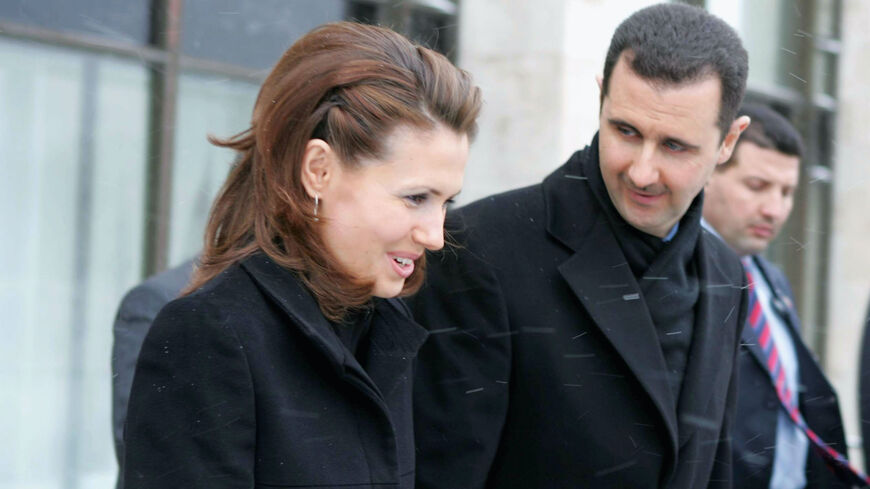 Syrian President Bashar al-Assad and his wife, Asma Assad, are seen during a visit to Moscow's State Institute for Foreign Relations on Jan. 25, 2005. Assad was awarded an honorary doctorate. - Salah Malkawi/ Getty Images

A congressionally mandated State Department report put the net worth of Syrian President Bashar al-Assad and his family at an estimated $1-2 billion but did little to shed light on how the country’s ruling family accumulates its vast fortune, analysts say.

An amendment in the National Defense Authorization Act (NDAA) for fiscal year 2022 required the department publish a report on the Assads' sources of income, including the funds they have generated through corrupt or illicit activities. The unclassified version of the report released on Thursday described the finances of Assad and his wife, Asma al-Assad, who are known “to maintain close patronage relationships with Syria’s largest economic players.”

“The Assad family runs a complex patronage system including shell companies and corporate facades that serves as a tool for the regime to access financial resources,” the report said.

Several of the president’s close relatives are mentioned in the report, including his brother Maher Assad, who is the commander of Syria’s Fourth Armored Division, and Assad’s telecom tycoon cousin Rami Makhlouf.

The report describes the Assad family’s apparent net worth of $1-2 billion as an “inexact estimate” based on open-source information that the department was unable to independently corroborate. More information on the family’s net worth is included in a classified annex, the report said.

There was hope among Syria observers that a public report on Assad’s exorbitant wealth could both damage his domestic credibility and raise the cost of normalization among countries considering welcoming Damascus back into the diplomatic fold.

But the unclassified report offered little beyond what’s already known about the Assad family’s finances and appeared to rely heavily on media reports and other publicly accessible information.

The department’s report notes that the Assads have gone to great lengths to keep their wealth under wraps, making it difficult to accurately estimate their net worth.

Family assets are “believed to be spread out and concealed in numerous accounts, real estate portfolios, corporations and offshore tax havens,” the report says. “Any assets located outside of Syria and not seized or blocked are likely held under false names or by other individuals.”

"The report was clearly rushed. The department undoubtedly could, and should, have comprised a much more comprehensive report,” Tenney told Al-Monitor, adding that she was especially disappointed that the report didn’t discuss at length the revenue generated from the trade of Captagon, an illegal amphetamine known to be produced and smuggled from Syria.

Al-Monitor reached out to the State Department for comment.

The report comes as living conditions across much of the war-torn country remain dire. Some 90% of the population is estimated to live below the poverty line, according to the United Nations. Roughly 12 million Syrians are considered food insecure.

“In reality, much of the deprivation in the country is due to his regime's corruption, mismanagement and aid diversion,” said Shaar. “Sanctions, while important, play only a secondary role.”

Some saw a missed opportunity to identify new avenues for sanctions against Assad’s inner circle.

“We lost a chance to make clear that there could be ways to tighten existing sanctions that would directly affect the upper tiers of the regime,” said Steven Heydemann, director of Middle East studies at Smith College and senior fellow at the Brookings Institution.

The United States has a range of sanctions, including through the so-called Caesar Act, aimed at choking off Assad's financial lifelines. The Biden administration has targeted Syrian military and intelligence officers using various sanctions authorities but hasn’t invoked the Caesar Act to squeeze Assad’s benefactors.

Joel Rayburn, the former US special envoy for Syria during the Trump administration, says there’s value in exposing the corruption that keeps Assad and his family entrenched in power.

“The Biden administration’s stated policy is to highlight the corruption of dictatorial regimes, including specifically the Assad regime,” he said. “Why they would pass up an opportunity to do that and to show that the executive branch and Congress are working together is a bit puzzling.”