Biden leaves Syria on back burner as war marks 10 years

In his first months in office, President Joe Biden's team has signaled that Syria’s civil war won’t be among his top foreign policy priorities. 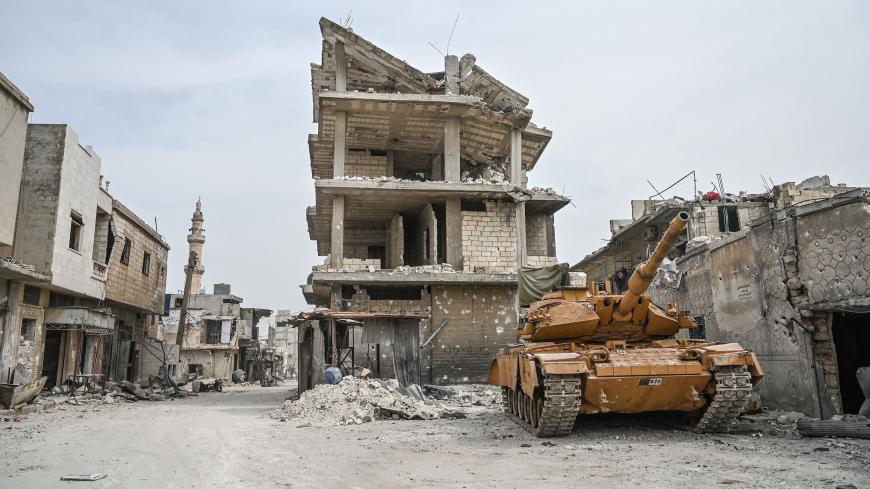 A Turkish military tank is seen in a destroyed neighbourhood of Sarmin town, about eight kilometres southeast of the city of Idlib in northwestern Syria, on March 10, 2020. - OZAN KOSE/AFP via Getty Images

“We failed,” US Secretary of State Antony Blinken has said of the Barack Obama administration’s approach to Syria. “Not for want of trying, but we failed.”

A slew of Obama veterans who now fill the ranks of President Joe Biden’s foreign policy team say they got it wrong in Syria, where a decade of fighting has killed hundreds of thousands of people, spawned a new generation of extremist groups and caused the biggest displacement crisis since World War II. In the years since Obama’s “red line” debacle, Syrian President Bashar al-Assad has only tightened his two-decade grip on power, clawing back much of the country using a mix of barrel bombs, chemical weapons and siege warfare with the help of his foreign sponsors, Iran and Russia.

Nearly two months into Biden’s tenure, it remains to be seen where the ruinous civil war that confounded his predecessors and still haunts his trusted aides — and on Monday marked its 10th anniversary — fits among his foreign policy priorities.

Early indications suggest the Middle East country is on the back burner, with the civil war in Yemen, the US mission in Afghanistan and nuclear diplomacy with Iran diverting attention. In his first foreign policy speech since taking office, Biden made no mention of Syria. Nor did Blinken.

“We also have these appointments that are not reassuring when it comes to how much time the administration will devote to Syria,” Heydemann said, pointing to Biden's Iran envoy Robert Malley and the White House’s Middle East coordinator Brett McGurk as figures who “represent perspectives that would push back against appeals for a more assertive US diplomatic role in the Syria conflict.”

In another signal that Syria may take a back seat to other regional conflicts, Biden has yet to name a permanent replacement for Joel Rayburn, who held the high-profile post of US special envoy for Syria after veteran diplomat James Jeffrey retired last year. The Biden team has instead named State Department official Aimee Cutrona as its acting representative for the war-torn country.

“They’ve distanced themselves from Syria, but they will be forced to confront it,” said Mouaz Moustafa, the executive director of the Syrian Emergency Task Force, a DC-based nonprofit.

The Biden administration could be compelled to act if the looming crisis in the northwestern Idlib province — the last stretch of land still in the hands of the opposition — reignites and threatens to spill across Syria’s borders.

“My fear is, instead of coming in in a leadership position and pushing for the protection of Idlib … we’re going to have to come in in reaction to perhaps another chemical weapons attack or another military offensive displacing hundreds of thousands or killing countless civilians,” said Moustafa.

Syrian and Russian warplanes pummeled Idlib and parts of the neighboring Aleppo and Hama provinces for nearly a year, killing hundreds and uprooting more than one million people before Russia and Turkey, which back opposing sides in the war, reached a fragile cease-fire in March 2020. Renewed fighting in Syria’s remaining rebel bastion could aggravate the country’s financial meltdown and usher in a new refugee crisis on Europe’s doorstep.

The Biden administration’s policies on Syria are meanwhile undergoing an interagency review, and advocates are hoping the end result will emphasize alleviating the humanitarian catastrophe in Idlib. It could include restoring assistance to northern Syria, where previous President Donald Trump slashed funding for stabilization projects in areas once controlled by the Islamic State.

There’s also pressure on the United States to flex its diplomatic muscle at the UN Security Council, which in July will vote on whether to reauthorize a cross-border aid operation into Syria that Assad’s veto-wielding backers on the 15-member council, Russia and China, are intent on eliminating.

“This is a critical time for the Biden administration to really reinvigorate the political process and let Russia and Assad and the Iranians know that we’re serious about our engagement on Syria,” said Jomana Qaddour, a nonresident senior fellow at the Atlantic Council.

The Biden team has so far signaled it will promote a political settlement to end the conflict in Syria, much like the Trump administration. But UN-led talks at the heart of that approach have failed to produce any meaningful results and in January, the last round of negotiations between the Syrian government and the opposition ended in a stalemate.

Biden has limited leverage to pressure Assad at the negotiating table, but is expected to use his sanctions power under the Caesar Act, a bipartisan law intended to choke off Assad’s financial lifelines. The law’s proponents have called on Biden to scale up Trump's use of Caesar and other sanctions authorities to more aggressively target the regime’s foreign investors and military sponsors.

As a debate over the US role in ending the civil war continues behind the scenes, former Ambassador Frederic Hof, who served as an adviser on Syria under Obama, says he understands the desire among Biden officials to deprioritize the conflict.

“There will be a temptation on the part of many people in the administration — people who mean well, people who are trying to do their jobs as well as possible — to try to keep the whole thing at arm’s length,” Hof said.

“It’s a real dilemma for an overburdened administration,” he said. “But trying to prevent Syria from getting any worse than it is now, I’m afraid, is going to be an obligatory task.”