Somalian opposition irked by Turkish support ahead of presidential elections

Turkey’s support to Somalia, a focal point of Ankara’s Africa outreach, has become increasingly controversial as the Somalian opposition fears that the president could use it to rig the upcoming elections. 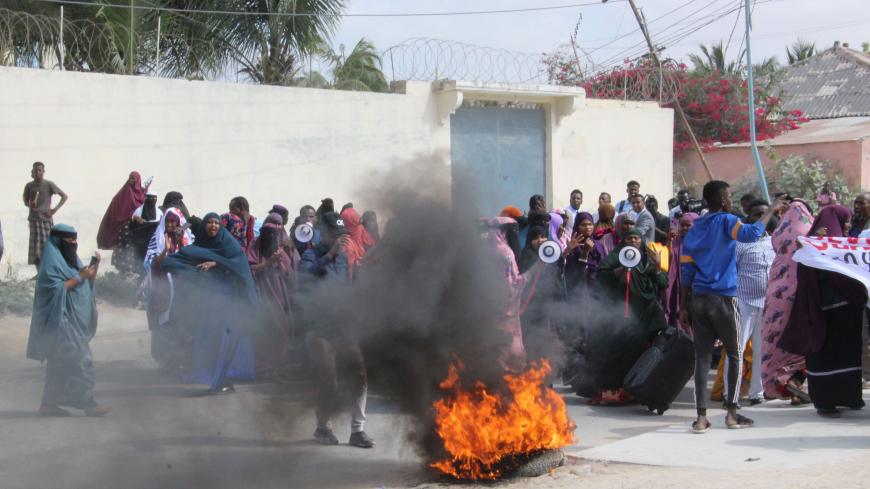 Women take part in a demonstration in Mogadishu on Dec. 15, 2020, against Somali President Mohamed Abdulahi Farmajo, who is accused of interferencing in the electoral process. - STRINGER / AFP

Turkey has gotten involved in the domestic political rifts in Somalia, the only African country where Turkey has a permanent military base.

The Somalian opposition accused Turkey of meddling in the country’s domestic politics in favor of the country’s incumbent president ahead of the critical presidential elections in February.

Most recently the opposition candidates called on Turkey to postpone a planned shipment of weapons to a Somalian police force until the elections, wary of President Mohamed Abdullahi Farmajo could use them to challenge the results. In a joint letter to the Turkish Embassy in Mogadishu, the candidates asked Turkey to postpone the shipment.

The candidates said they learned that Turkey was going to deliver 1,000 G3 assault rifles and 150,000 rounds of ammunition to the Somalian police’s Harma’ad unit between Dec. 16 and Dec. 18, reminding the Turkish authorities that the unit had been used to rig past elections. “There is no doubt the same Harma’ad forces and the weapons from Turkey will be used to hijack the upcoming elections,” the candidates were quoted as saying by Reuters.

The presidential election that was initially scheduled for December was postponed to February due to a controversy surrounding the composition of the country’s electoral board. Accusing Farmajo of appointing his men to the board, which is supposed to be independent, the  opposition took to the streets in a nationwide protest on Dec. 15.

On the day of the protests, Turkey’s ambassador to Somalia welcomed the board members at the Turkish Embassy in Mogadishu. Turkish Ambassador Ahmet Yilmaz tweeted his picture with them, saying that they had informed him about the preparations for the election. The tweet further fueled the anger of the opposition.

The opposition candidates expressed their frustration over the visit, which they consider Turkish support of the board. “The Council of Presidential Candidates is disappointed with the brotherly government of Turkey's expression of support and praise for the unconstitutional electoral committee established by the federal government,” they said in a joint statement on Dec. 16, calling on the Turkish ambassador to take an impartial stance in the elections.

The candidates also complained that the Turkish position contrasts with the position of Somalia's International Partners, a multinational platform to support Somalia that includes Turkey along with European and regional powers such as the United Kingdom and the United States.

“Turkey should not be entrapped in Somalia’s clan politics. Stay away from it and retain your neutrality,” wrote a Twitter user by the name of Dr Aweys Sufi wrote. Others, meanwhile, believe that this anti-Turkey sentiment is fueled by Turkey’s regional adversaries, including the United Arab Emirates.

There are also claims that a police unit trained by Turkey used live ammunition to disperse the demonstrators in the Dec. 15 protests. Four protesters were wounded. “This allegation has not been confirmed independently, but what is confirmed is that the president used the same unit against one of his rivals in the Gedo region in southern Somalia early this year,” the journalist said. “Yet observers believe it’s not Turkey but the president himself who is responsible for the actions of this police unit, as he is accused of politicizing the security forces.”

Ankara argues that the pro-UAE factions among the Somalian opposition are fueling the criticism against its involvement in Somalia as part of a broader war of influence between Turkey and the Emirates. The journalist said that although there is “no evidence” for this argument, “it’s a fact that Turkey has close ties with the incumbent Somalian government, as the UAE has with some opposition members.”

Ankara has been trying to boost its relations with the African countries, particularly since 2005, which President Recep Tayyip Erdogan declared the “year of Africa.” Erdogan’s 2011 visit to Mogadishu, the first by a non-African leader in 20 years, was hailed by the Somalian and Turkish press. A minor accident took place during the landing of his plane, prompting headlines such as “The leader who reaches out Africa despite the risks.” Since 2002, Turkey has increased the number of its embassies on the continent from 12 to 42, with Turkish Airlines operating flights to 58 African cities.

Thousands of Somalian troops have received training at the $50 million military base Turkey inaugurated in Mogadishu in 2017, leading to an increase in Turkish-speaking personnel among the Somalian security forces. The two countries have advanced their cooperation in several fields including transportation, construction, fishing, health and energy. Turkey’s flagship air carrier Turkish Airlines has been operating twice-a-week flights to Mogadishu. Most recently, a Turkish port operator signed a contract with the Somalian government to run the Port of Mogadishu.

Turkey has branded its Somalian outreach as an impartial effort to help all the Somalian people. Indeed, until recently, all Somalian circles, except the al-Qaeda-affiliated extremist Al-Shabab group, have been happy with the Turkish support.

Yet Ankara’s negligence or failure to remain an impartial actor in Somalia's domestic politics have been marring its efforts for the past few years. Turkish officials have been ignoring the criticism and downplaying it as an UAE-led campaign against Turkey.

Ankara’s approach risks losing Somalia if the current president loses the elections in February, as in Sudan after the 2019 coup. Sudan’s strongman leader Omar al-Bashir was ousted by the Sudanese army's pro-UAE and pro-Saudi elements in a coup that disrupted the cooperation agreements between Ankara and Khartoum signed under Bashir's rule.

In response to the Turkish military base in Somalia, the UAE built a naval and air base in the breakaway region of Somaliland as part of its efforts to increase its control over the Gulf of Aden, putting brakes on Turkey’s neo-Ottoman ambitions over the Horn of Africa. Somaliland, which was once part of the Ottoman Empire now remains under the heavy influence of the Emirati-led Gulf bloc.

Some also believe the power struggle between Turkey and the UAE over Somalia poses risks to the nation's social harmony. As an article in the Somaliland Sun put it, “Somalia is [a] broken country and deeply bleeding due to the injuries caused by the abovementioned violence and chaos. [A very minor] misunderstanding could trigger another uncontrollable new round of violence. It is very important for [the Somalian] government and its partners like Turkey to avoid any political or tribal error.”