Greece has called for European leaders to apply stronger pressure on Ankara over its actions in the eastern Mediterranean, but the appeals have largely fallen on deaf ears. 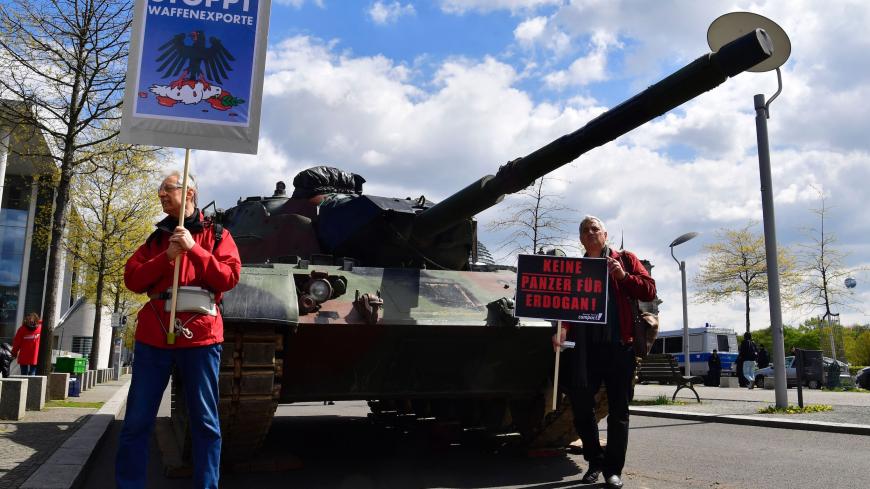 Activists stand in front of a tank and hold up signs reading "stop exports of weapons" to protest against plans of the German military technology group Rheinmetall to build a tank factory in Turkey, on April 26, 2017, in front of the Bundestag in Berlin. - JOHN MACDOUGALL/AFP via Getty Images

Germany will not heed a request from Greece to impose an arms embargo against Turkey, German Foreign Minister Heiko Maas said Tuesday. The statement comes as Greece has urged European leaders to apply pressure to Ankara over its actions in disputed waters in the eastern Mediterranean.

“We continue to believe that there is a solution to the conflict and that we do not have to permanently remove a NATO partner from the arms cooperation,” Heiko Maas told the German news agency DPA, calling the arms embargo “strategically incorrect.” Germany has a contract to deliver six submarines to Turkey.

Greece and Cyprus have been embroiled in tensions with Turkey over disputed maritime boundaries in the eastern Mediterranean. In August, Ankara sent a research vessel into the waters to search for untapped energy reserves. Since then, the countries have exchanged maritime military drills.

Ahead of an EU leaders' summit on Dec. 10-11, Greece called for an EU arms embargo against Turkey, arguing that the weapons could be used against EU members Greece and Cyprus if there is an escalation over contested waters in the eastern Mediterranean.

Outside of France, Greece and Cyprus, European leaders have largely dismissed the request for an arms embargo and have taken a softer position in hopes of carving out space for constructive dialogue.

An EU Council decision in early October agreed to monitor the situation and said they were “ready to pay an active role in supporting the negotiations.”

But following the December leaders' summit, the European Council found that Turkey had escalated its rhetoric against European member states. The council forged ahead with imposing sanctions against an unspecified number of Turkish officials and entities, but deferred larger decisions such as an arms embargo until they could reportedly consult with Washington’s incoming Joe Biden administration.

In recent weeks, Greece has called out Germany, home to about 3 million people of Turkish heritage, to halt a delivery of six Type 214 submarines ordered by Ankara in 2009. Beginning in 2022, one submarine will join the Turkish naval forces each year until 2027. The purchase of the nearly undetectable vessels could tilt the maritime military advantage to Turkey.

“I understand the financial issue, but I am sure Germany also understands the huge contradiction of providing offensive weapons to a country that threatens the peace and stability of two EU countries. This is the definition of the word contradiction,” Greek Foreign Minister Nikos Dendias told Politico last month.

Germany has insisted on keeping open the possibility of Turkish cooperation and reaffirmed an EU call for a multilateral conference on the future of the waters.

Turkey has found itself at the center of various disagreements with France and Western leaders, pitting itself against Paris in Libya and drawing unease from the United States and others over its position in northeast Syria and the acquisition of a Russian-made S-400 missile defense system.

Last year, the United States kicked Turkey out of its F-35 program over its purchase of the S-400 system. Washington followed the move this month by sanctioning the defense arm of its NATO ally.