Tunisians eager for justice and reform are fighting another bill to increase the powers of the country's already virtually untouchable police force. 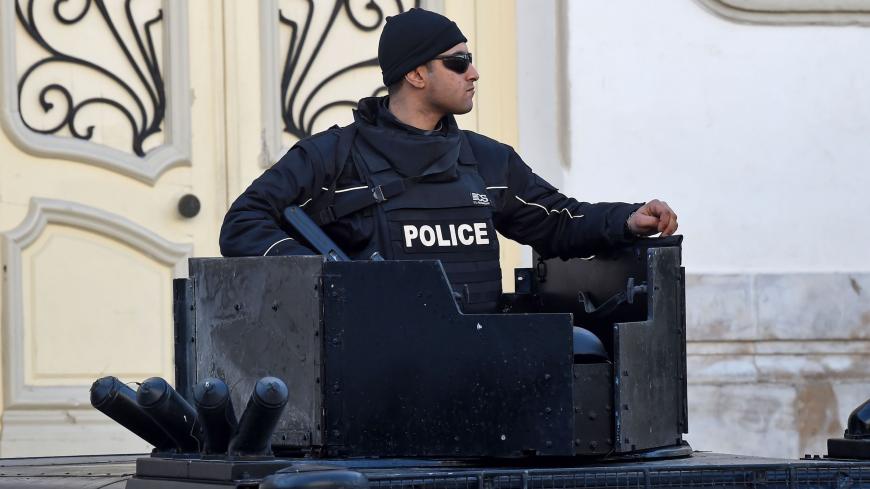 A Tunisian police officer stands guard in central Tunis during a rally marking the ninth anniversary of the 2011 uprising on Habib Bourguiba Avenue on Jan. 14, 2020. - FETHI BELAID/AFP via Getty Images

After years of unchallenged dominance within Tunisia's security debate, there are are growing signs that the power enjoyed by the country's police force and its unions may be waning.

In recent months, growing public resistance to new security laws and a campaign by the country's powerful lawyers association, along with a perceived decline in the terror threat, may finally be about to check the power of the country's police.

Once regarded as the attack dogs of the former regime, the police were among the first vestiges of the old regime to return to the post-revolutionary landscape. Since then, fueled by increased terror threats facing the nascent democracy and aided by a tranche of newly formed trade unions operating under official sounding names, such as the National Union of Internal Security Forces, whose actions in defense of their members has occasionally bordered on gangsterism, the police's virtual impunity has become almost a fact of life.

In addition to the longstanding and ambiguous legal framework governing the conduct of the trade unions, there are two other pieces of legislation, one passed and the other long promoted, that further bolster the police's power.

In July of 2015, overlooking what an inquest would later characterize as the police's "cowardice" during the terror attack carried out at the tourist resort of Sousse a month earlier, the government passed long-delayed anti-terror legislation, greatly enhancing powers already supercharged by the state of emergency enacted in response to the attacks.

That same year, Tunisia's security law, which in its first draft criminalized criticism of the country's security forces and granted them impunity in using deadly force under certain circumstances, failed to pass. Despite a second attempt to enact it backed by the security unions in 2017, the law again failed to pass. Its reemergence this year, Whittled down to only regulations on the use of deadly force, was met by a vocal backlash before discussion of it was deferred in October.

While the current state of emergency already grants the police sweeping powers, activists see the most recent bid to pass the security law as not so much about the legislation itself as the police seeking to cement their position at the centre of the Tunisian state.

"They want to have the approval of the parliament to do anything they want with impunity," said Tunisian activist and journalist Henda Chennaoui, who was among those protesting the new security bill. For Chennaoui, the effort wasn't so much about the legislation as it was about the police's quest to turn back the clock to when they enjoyed the unequivocal protection of President Zine El Abidine Ben Ali and his cabal.

Civil society's hunger for reform is growing. "We don't see any clear political will to stop police violence or (enact) real reform," Chennaoui continued, "We want real transparency in how the police are trained and selected." In a system where officers have grown accustomed to acting with anonymity, pressure for transparency is also growing. However, the challenges ahead are significant. "It is a very old system and everyone involved is protecting their community and their power," Chennaoui said.

However, while the police's power may be under challenge, the force seems as determined as ever to retain it. In October of this year, in a move that carried unnerving echoes of an almost identical incident two years earlier, heavily armed members of a police union besieged a court in Ben Arous, near the capital, where a complaint against them was being investigated. In this instance, lawyer Nesrine Guerneh had alleged that she was brutally assaulted by police officers while interrogating her client.

In mid-October, all the country's lawyers observed a one-day strike in solidarity with Guerneh and what they claimed was manipulation of evidence in her case.

"Normally, nine years after the revolution, we would be fighting for the social rights of the citizens," the Tunisian Bar Association's head Hatem Meziou told a translator. "Instead, we're fighting this new law and the police's ability to obscure an individual's role in their crimes," he said.

While Meziou noted the work the bar association performs in investigating claims of police abuse across the country, he said security forces are unconcerned with lawyers’ individual rights. He said, "The Guerneh case is dangerous. If they feel they can violate a lawyer, they can violate anyone."

Throughout the post-revolutionary period, the police unions, ironically established under the auspices of the bar association to protect their members' rights, have stymied any attempt at reform.

"The police unions helped to thwart the notion of security sector reform in a number of ways," Sharan Grewal, a visiting fellow at the Brookings Institution, told Al-Monitor, going on to detail the talking points the police unions use to make their case. "They lobbied, even blackmailed politicians to pass laws that would 'legalize' abuses," he said, citing both the 2015 anti-terrorism law and the security law.

However, "I am more optimistic today about the prospects for security sector reform. Security threats have receded, so the police unions are less able to use that to delay reform," he said. "Moreover, by storming courthouses and abusing lawyers [like Nesrine Guerneh], the police have now antagonized two very powerful groups — the lawyers and the judges — two groups that have the power to actually hold the police accountable for their actions."

He added, "Finally, while politicians [in the consensus government] abandoned police reform, today you have at least two major parties — the Democratic Current and the Dignity Coalition — actively calling for reform."

Despite several attempts by Al-Monitor to contact it, including by fax, Tunisia's Interior Ministry did not respond to requests for comment.