Freedom House has ranked Tunisia as a "free" country, despite the political, economic and social challenges inherited from the dictatorship era. 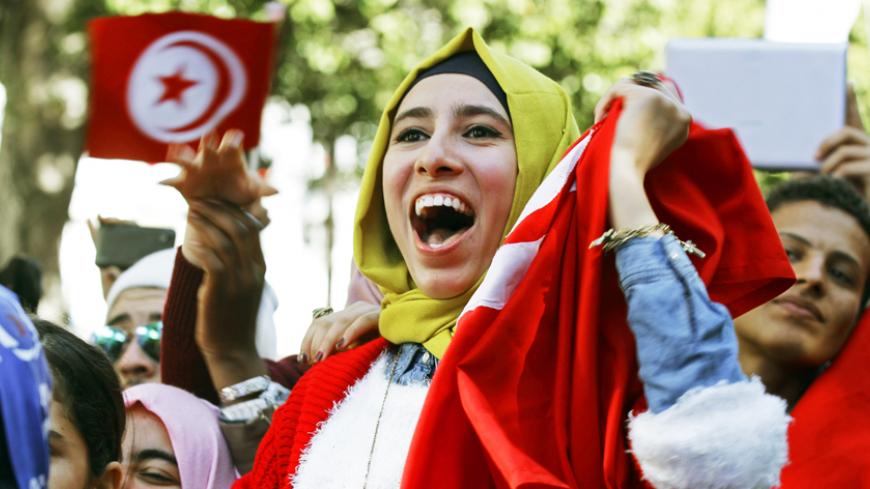 TUNIS, Tunisia — Tunisia’s largely peaceful transition toward democracy following its 2011 revolution stands in stark contrast to the conflict, repression and return of dictatorship seen in other countries that experienced Arab Spring protests. The Washington-based nongovernmental organization Freedom House acknowledged Tunisia’s progress in its annual Freedom in the World report, released Jan. 28, by singling it out as a "notable exception" in a year that otherwise saw the state of freedom worsen in virtually every region.

Based on a rubric drawn from international human rights norms that examines political rights and civil liberties, the report categorizes countries as "not free," "partly free" or "free." After jumping from "not free" to "partly free" following the overthrow of longtime dictator Zine El Abidine Ben Ali in 2011, Tunisia became the first Arab country since the outbreak of the Lebanese Civil War in 1975 to be rated as "free" in the report.

Tunisia received perfect scores on indices related to the electoral process and political participation, and the highest overall score for the general category of political rights. For civil liberties, however, the country received a three out of seven, the same as in 2014.

The completion of free and transparent parliamentary and presidential elections at the end of 2014, as well as the adoption of a new constitution, the practice of dialogue and compromise among political leaders and strong civil society engagement were the primary reasons for the upgrade, according to Sarah Repucci, director of the Freedom in the World project.

Despite the progress, and as suggested by the lower rating on civil liberties, challenges persist in Tunisia, particularly those related to corruption and the rule of law. Local human rights activists also see much more work that needs to be done to expand and preserve the space of freedom within the country, and average Tunisians struggling in a stagnant economy are waiting to feel the tangible dividends of their newfound freedoms.

Tunisia is still grappling with the legacy of a political, economic and social system that was engineered over the course of decades to concentrate business and political power within a small handful of elites, according to a World Bank report released last year. These practices embedded nepotism and bribery as part of the culture. “When you have a corrupt society, that’s not going to change quickly with a new government, a new political system or a new constitution. It takes time for those institutions to take effect,” Repucci told Al-Monitor.

The country also has yet to undertake serious legal reform, leading to continued concerns about the independence of the judiciary, functioning of the court system and legal codes dating from the era of dictatorship, according to Repucci.

In a recent case highlighting the need for legal reform, a military court tried and sentenced controversial blogger Yassine Ayari in absentia to three years in prison on charges of defaming the military for blog posts he wrote in August 2014. Following an appeal, Ayari’s sentence was reduced to one year. “We can’t speak about freedom in a country like Tunisia when we have a blogger in jail because he is writing on his Facebook [page] about the army,” Henda Chennaoui, a prominent Tunisian human rights activist, told Al-Monitor.

Chennaoui also said that international organizations and reports tend to focus on major cities where conditions are generally better. Police repression of social movements in the interior of Tunisia, which is underdeveloped and politically marginalized compared to the coast, is often overlooked even by local organizations, Chennaoui added. Repucci did, however, acknowledge the persistence of regional inequalities in the application of law as an area of weakness for Tunisia.

Aside from freedom of speech, Chennaoui still feels that it is too early to speak of Tunisia being a free country. “Before the revolution we didn’t have any rights or any freedom to speak,” she said. “Now, we have a lot more space to move and to speak and to have political activities, but it’s not enough.”

Chennaoui is also concerned that the fear of terrorism that emerged after the revolution is giving authorities an excuse to curtail rights and freedoms. “The fight against terrorism is the most dangerous problem now about the freedom of expression and human rights,” she said. “The regime uses this argument to repress people, to put people in jail, and it is very, very dangerous.”

Student Adam Najmoui, 21, also thinks it is too early to consider Tunisia a free country. “I would say we are on our way. It’s going to take some time,” he said, emphasizing the limitations on social freedoms when it comes to personal beliefs and sexuality.

Sabrine Cherif, 27, who volunteered as an observer in the last elections, said that religion places some limitations on how far Tunisians can push their freedoms. But, she still viewed the country as being free. “Yes, absolutely, it’s a free country. I can say that and I'm proud,” she told Al-Monitor.

The persistence of economic difficulties, which were an underlying cause of the revolution, has led some in Tunisian society to question why they rose up in the first place. “Prices are getting higher and we are getting nowhere. … There is no democracy,” a Tunisian man, 55, who gave his name only as Abdallah, told Al-Monitor, highlighting that many people have yet to sense any real benefit despite the improvement of political freedoms.

In comparison to the rest of the Arab world, however, Tunisia’s progress stands out as exceptional. “It’s still operating in a very tough region,” Repucci said. “I think it is especially important for it not to slip back, both for Tunisians, but also to be an example in the region because it really is the shining example right now.”

But, Tunisia’s shining example is still a work in progress. Scratching at the surface of the democratic transition reveals that the old system inherited from the era of dictatorship is still largely intact when it comes to the security forces, the internal workings of government ministries, the economy and even people’s mentalities.

Tunisia’s upgrade to being a "free" country is deserved for the progress it has made on the political front. But, the long-term sustainability of the country’s transition is dependent on how willing political leaders will be to undertake the deep reforms necessary to transform the lingering structures of autocracy into a system that supports freedoms.