Freedom of the press is at risk in Tunisia's post-revolution atmosphere, as violence against journalists rises amid a government crackdown. 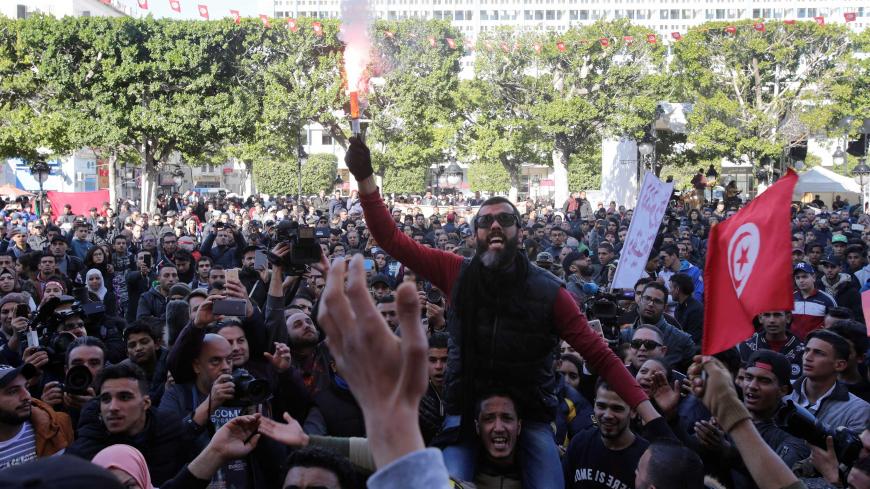 The most recent wave of protests in Tunisia — triggered by harsh austerity measures put in place by the Tunisian government and the International Monetary Fund — saw hundreds of arrests, dozens of injuries and one protester death. Seven years after its revolution, Tunisia is often heralded as a “success story” of the so-called Arab Spring. The protests highlighted the deep economic and employment issues of the country and the persistent, extraordinary force the security services use when managing these situations.

They also brought to the surface another worrying development: regressions on press freedom. Since the protests began on Jan. 8, four journalists have been detained and questioned by local police or the National Guard, despite having the proper press credentials. Two photojournalists from the Turkish news agency Anadolu, a Radio France International correspondent and a French independent journalist were all detained in separate incidents. Though the interactions were described as “civil in nature,” one journalist was asked to release the identity of his sources (he declined), while an Anadolu photographer had his photos deleted.

“These incidents illustrate the awakening of the security organization’s old reflexes toward the press in general. It’s a culture of police control that was considered over after the revolution but that persists and rises back up to the surface,” Fred Bobin, a correspondent for Le Monde and president of the North African Foreign Correspondents' Club (NAFCC), told Al-Monitor by email. The NAFCC is the government-recognized law association that represents the interests of foreign journalists in the region.

One of the most promising gains of the 2011 Tunisian revolution was freedom of expression, an integral part of its new and hard-fought democracy. Relaxations on the press brought essential critique and nuance to television, radio, books, newspapers and journals. Censorship had been central to the dictatorship of Zine El Abidine Ben Ali, as he cracked down on any perceived political or religious opposition. Tunisia’s constitution did not clearly define press freedoms, and libel and defamation (broadly defined) were criminalized, allowing Ben Ali to control the country’s narrative.

Any journalist who wrote an offensive statement about Ben Ali could expect up to five years in prison; journalists who “disturbed the public order” could also be legally punished. The intentionally vague language of the laws allowed the government to prosecute indiscriminately. During the dictatorship, over 100 Tunisian journalists were forced into exile. Other local journalists often resorted to hunger strikes. While allowed access into the country, foreign journalists were closely monitored by plainclothes policemen, whose mere presence would intimidate potential interviewees.

In 2011, Freedom House — a US-based nongovernmental organization that rates press and internet freedom of countries worldwide — ranked Tunisia “not free,” a position the country had held since Freedom House began ranking countries in 2002. In March 2011, French-German photographer Lucas Dolega died of wounds sustained after being hit by a tear-gas canister thrown by police while covering ongoing protests. Just a year later, the gains of the revolution changed Tunisia’s status to “partially free,” as official censorship ceased. According to the 2014 Tunisian Constitution, freedom of speech is protected by Article 31, and Tunisia is considered the only country in the region where journalists can work with relative safety and ease.

While recent detentions of foreign journalists have brought international attention to a general decline in press freedom and journalist safety in Tunisia, there have been worrying signs that media freedom is backsliding since 2015. That year, following a wave of high-profile terrorist attacks, a new anti-terrorism law was passed allowing state security forces expansive surveillance authority. Dozens of journalists were assaulted by police when reporting on a suicide bombing of a presidential guard bus that November.

Reporters Without Borders penned an open letter to Tunisian Prime Minister Youssef Chahed in March 2017, citing “its concern about declining media freedoms.” Military tribunals for civilians, including journalists, persist, as does an arcane code from Ben Ali’s time that “criminalizes offenses against the dignity, reputation or morale of the army.” In September, a Tunisian radio reporter was beaten, detained and had his equipment confiscated before being released without any charges. Entire organizations have been targeted as well — after publishing a document from the Panama Papers that mentioned politician Moncef Marzouki, the independent Tunisian website Inkyfada was hacked.

Press freedom in Tunisia is not in the same desperate situation as some of its regional neighbors, including Egypt and Turkey. “At this point, I don’t think we can talk about a ‘campaign of repression on freedom of press,’" said Bobin, noting that governmental authorities are quick to reassure foreign correspondents that they support press freedom — though there does seem to be a gap between official statements and how police on the ground treat reporters. Local journalists are even more vulnerable to police mistreatment in the field.

While it is unlikely that seven years on from the revolution the country will entirely revert to its old ways, presidential spokeswoman Saida Garrach last week went on Tunisian radio to discuss the government’s reintroduction of the Tunisian Agency of External Communication (known by its French acronym, ACTE). Introduced in 1990 to originally promote Tunisia’s image abroad, ACTE was quickly folded into Ben Ali’s propaganda apparatus. The National Syndicate of Tunisian Journalists expressed their concerns over returning to a dictatorship-era porte-parole.

Garrach dismissed the concerns, declaring that “in every country in the world, there are services that work on their country’s image in order to sell their country’s image.” She pointed to Morocco as a positive example, seemingly forgetting that Moroccan media is severely restricted, that journalists are barred from entire swaths of the country and the country is categorized as “not free.”

The ongoing protests in Tunisia, coupled with its precarious economic situation, highlight that this is a country in extraordinary transition. In times of social upheaval, it’s all too easy to fall back into old habits in an effort to maintain the status quo. But freedom of speech and press are not obstacles to security or peace — they are an integral part of any democracy, including Tunisia’s.