Is freedom of expression at stake in Tunisia?

There are growing concerns in Tunisia over the declining freedom of expression, Tunisian authorities' crackdown on bloggers and the Nidaa Tunis draft law on electronic defamation. 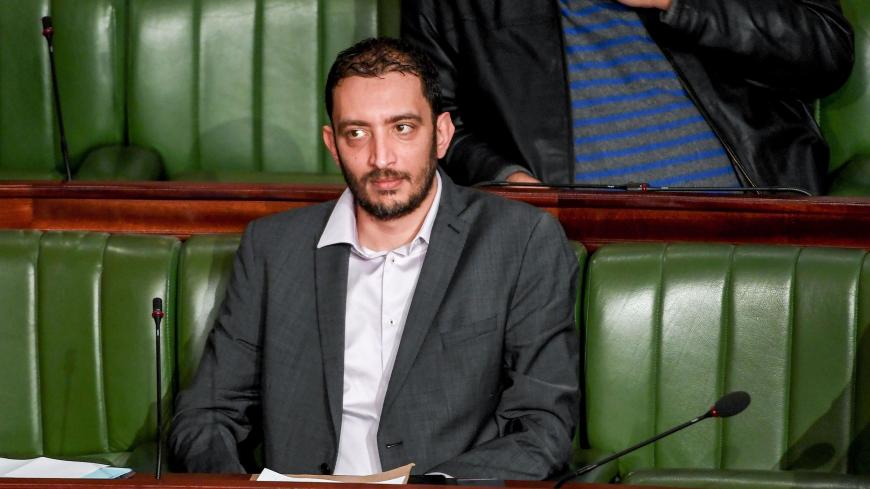 Tunisian authorities have been prosecuting a number of bloggers in recent months on charges of using social media websites to criticize the performance of the government and its ministers.

One of those prosecuted as a result of Facebook posts is opposition parliament member and blogger Yassine Ayari, who appeared April 10 before the criminal court of the Tunisian military judicial system on felony charges of treason and conspiring against state security, according Ayari defense team member Malek bin Omar.

Ayari said in a Facebook post April 10, “The trial was illegal,” adding that he appeared before the court but remained silent the entire time because of the case's illegitimacy and because of the state's futility. The case was adjourned until May 8, on the grounds that the military court’s report was not yet ready.

Omar said that Ayari, out of respect for the judiciary, did not insist on benefiting from parliamentary immunity in the case. The legislator had said in a March 30 blog post that the punishment for the charges could include the death penalty.

On March 27, in a separate case, the military judiciary sentenced Ayari to 16 days in jail for criticizing the military and offending the president of the republic, Omar said. The military prosecution, however, appealed the sentence in the misdemeanor case, saying it was too lenient.

In the post he faced prosecution for on April 10, Ayari made fun of President Beji Caid Essebsi’s appointment of Ismail al-Fathalli as chief of staff for the land forces and described Fathalli as “vulnerable.” Ayari later deleted the post.

Amnesty International said in January that prosecution of "Yassine Ayari in a military court for his posts on Facebook is a serious violation of the right to freedom of expression and the right to fair trial.”

Ayari was previously tried and imprisoned several years ago for publishing critical comments online. A military court sentenced him in November 2014 in absentia to three years on charges of “insulting the dignity of the army” and criticizing Justice Minister Ghazi al-Gribi as well as specific appointments made in the military command. In January 2015, a military court reduced the sentence to one year in prison. He was released after six months in jail.

Blogger Mahmoud al-Ghozlani told Al-Monitor that he was sentenced to a year in prison on charges of criticizing the performance of the Jilma municipality in the governorate of Sidi Bouzid.

Ghozlani warned against “serious attempts on the part of some political lobbies (which he did not name) to muzzle the people, reproduce tyranny and restrict freedoms.” He said that “these parties constitute a real threat to democracy in Tunisia.”

On March 9, the Court of First Instance in Tunisia sentenced blogger Sobhi al-Omri to a year and a half in prison for mentioning on Facebook information that involves Adel Shoushan, who served as security director of the Tunis district and is currently director-general of general security.

For his part, blogger Wahid al-Brahmi told Al-Monitor he was arrested Oct. 25 because of posts dating to 2013 in which he criticized Lotfi Braham, who is now interior minister but who was national guard commander at the time of the posts. Brahmi was prevented from resuming his work at the Regional Commissariat for Education after his release April 5 on parole, as the commissariat required a final ruling allowing him to resume his work.

On March 26, the Ministry of Education arrested a professor at the Mahmud Messadi Institute in El-Hencha and a teacher at the Essedra School in Sakiet Ezzit for two Facebook posts against Minister of Education Hatem Ben Salem.

Amnesty International reported on its official website that at least 10 civilians have been tried since 2011 before military courts in cases of freedom of expression, mainly because of criticism leveled at the military or at state officials.

On March 22, the ruling Nidaa Tunis Party submitted a draft law to parliament under the title “electronic defamation.” The bill deals with online offenses to “good morals,” “the public order” and “the inviolability of the private life of a person or body.” The bill proposes imposing fines on offenders as well as sentences of up to two years in prison.

Jalal Ghadira, a Nidaa Tunis parliament member, told Al-Monitor, “The party calls for deeming the criticism of people on social networking sites as a crime punishable by law.”

Ghadira added, “The draft law will not contradict the most important gain of the revolution, which is the freedom of expression.”

The legislative initiative includes sections that call for punitive actions against any internet publication that includes "criticism, insults or curses.”

In response, the Tunisian Journalists Syndicate issued a statement March 26 condemning the draft law proposed by Nidaa Tunis as an attempt to return to the cycle of tyranny.

In the same statement, the syndicate said the draft law “reflects an authoritarian and restrictive mentality that dates back to the era of dictatorship, as it terribly ignores the gains of the Tunisian revolution in the field of freedom of opinion and expression.”

Faten Khalifa, a Tunisian journalist, told Al-Monitor, “The arrests carried out by the authorities in Tunisia reflect the regime’s current vulnerability, weak-mindedness and lack of vision. This is why they are trying to muzzle every voice that criticizes their failed policies.”

During a joint press conference with French President Emmanuel Macron on Jan. 31, Essebsi had denied that freedoms were being restricted in the country, as he praised the progress achieved by Tunisia on the road to democracy and respect for freedoms.

This comes at a time when Tunisia ranks first in the Arab index of freedoms, according to the 2018 classifications of the US Freedom House organization, although it fell eight points compared with last year's classification, dropping to 70 points on a scale of 0-100, with 100 being the most free.

The prosecution of bloggers for anti-government comments is raising concerns among human rights organizations, such as Human Rights Watch and Amnesty International, over the status of freedom of expression in the country.