Although President Kais Saied asserted that he would respect the constitution, some political parties and governmental organizations expressed their concerns about his monopolization of power. 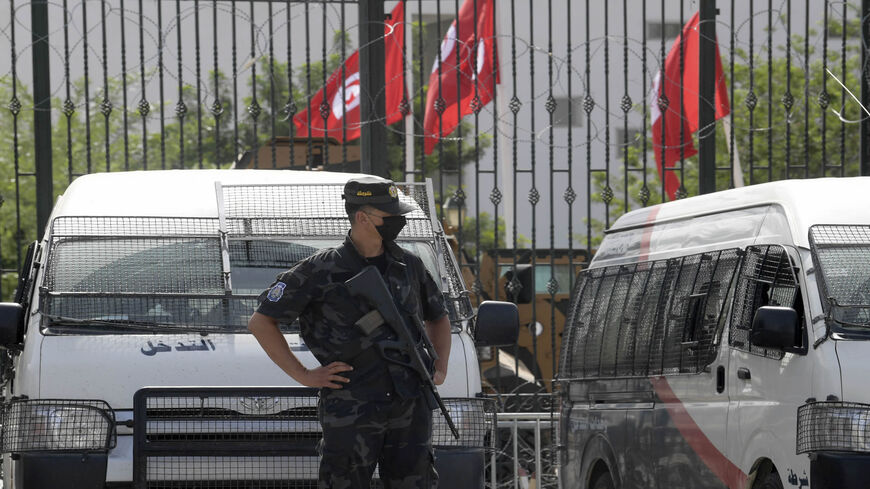 TUNIS, Tunisia — Mohsen al-Daly, spokesman for the Court of First Instance and the Judicial Counter-Terrorism Division in Tunisia, said in an Aug. 3 statement to Jawhara FM that the Judicial Counter-Terrorism Division opened two terrorism cases related to two members of the suspended parliament, without revealing their identity. He said, “The Financial Judicial Body is facing cases of money laundering, conflict of interest and fraud in which several members of parliament are implicated.”

President Kais Saied had taken decisions July 25 to lift immunity from the members of parliament, take over the executive authority and suspend parliament for 30 days.

The Karama (Dignity) Coalition, an Islamist party supporting the Ennahda movement, member of parliament Maher Zid and Mohammed Affes were also arrested July 31 on suspicion of insulting members of the border police who banned a woman from traveling. Independent parliamentarian Yassin Ayari, known for criticizing the army and presidency, was also arrested July 30.

Zid was released a day after his arrest, after showing enough evidence to stop investigating him. Meanwhile, Ayari and Affes remain detained.

Affes is a former imam and a radical conservative, while Zid is a former blogger and journalist who was sentenced in absentia to two years in prison in March 2018, on the grounds of insulting former Tunisian President Beji Caid Essebsi.

Ayari, a former blogger, was repeatedly charged in the past because of his discourse that was critical of the army. He also described the president’s latest actions as “a military coup.”

Seifeddine Makhlouf, head of the Karama Coalition, posted a video on YouTube Aug. 1 in which he described the decision to arrest Zid and Affes as “vengeful.” Makhlouf, who is a strong opponent of Saied, noted that the two members of parliament and himself are being pursued on the grounds of a case related to an altercation with police unions back in March at Tunis airport.

IWatch association, an independent Tunisian watchdog that flags administrative and financial corruption and promotes transparency, published July 31 a list with the names of 14 parliamentarians who are being judicially pursued and are facing the risk of arrest.

Massoud bin Ramadan, official spokesman for the Social and Economic Forum of Economic and Social Rights, a nongovernmental organization, told Al-Monitor that a fair trial must be ensured, away from revenge and settling accounts. He noted that the policy of impunity for 10 years after the 2011 revolution and since the rise of Ennahda to power has fueled rampant corruption.

In a statement published July 26, Amnesty International said Saied must publicly commit to respecting and protecting human rights, including the right to freedom of expression, freedom of association and peaceful assembly, after he suspended the parliament and seized the powers of some judicial authorities.

Heba Morayef, director of Amnesty International’s Middle East and North Africa regional office, said in the statement, “The hard-won freedoms and human rights gains of Tunisia’s 2011 uprising are at risk, particularly in the absence of a Constitutional Court to protect the rights of everyone in the country. President Kais Saied must ensure that any acts he orders are strictly in line with Tunisia's obligations under international human rights law and most importantly must refrain from political purges.”

Human Rights Watch Middle East and North Africa director Eric Goldstein said in a statement July 27 that the arrests proved the fears that the president might use his extraordinary powers against his opponents.

Jamal Musallem, official spokesman for the Tunisian Human Rights League, told Al-Monitor that the league will closely follow the trials and complaints of some members of parliament. He noted that trials according to international standards, where judicial bodies are independent, must be guaranteed.

He said, “The league will not keep mum about any violations threatening the gains that Tunisia made following the revolution, mainly in terms of freedoms.”

Facing the international community’s concerns about the relapse of Tunisia, which was the cradle of the Arab Spring revolutions, Saied, who granted himself full powers and suspended parliament July 25, said during an interview with journalists from The New York Times on July 30, “Freedom of speech will not be jeopardized. I will not start a new stage based on dictatorship at this age. I hate and detest dictatorship.”

Tunisian Foreign Minister Othman Jerandi tweeted July 28 that he held deliberations with his French, Italian, Portuguese and Belgian counterparts, during which he defended the measures that Saied had taken and asserted that “democracy and freedoms are irreversible choices.”