Human rights organizations in Tunisia are increasingly concerned about the police unions’ encroachment on politics. 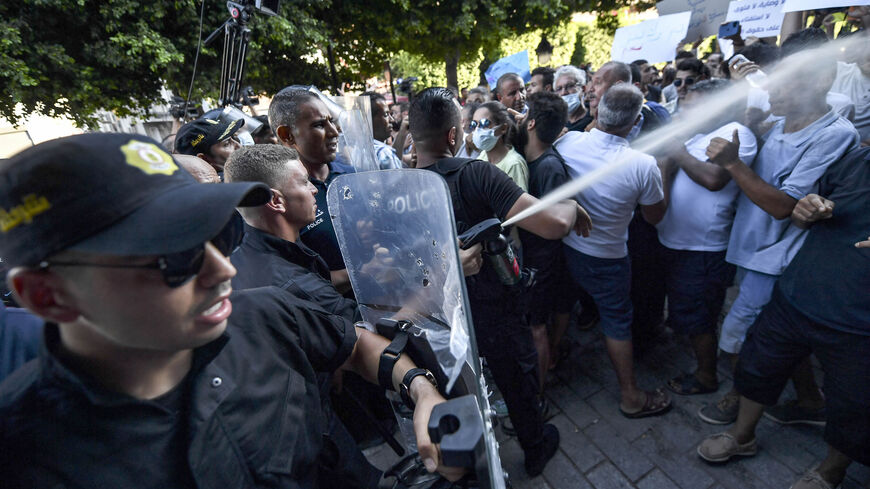 A policeman sprays tear gas at protesters during a demonstration along Habib Bourguiba Avenue, against their president and the upcoming July 25 constitutional referendum, Tunis, Tunisia, July 22, 2022. - Fethi Belaid/AFP via Getty Images

This was the response to Saied's request upon meeting Aug. 10 with Minister of Interior Tawfiq Sharaf El-Din. Saied urged the police to commit to protecting people and property and ensuring freedom of expression. In a statement issued by the presidency on the same day, Saied acknowledged that although the right for security personnel to unionize is a constitutional right, the constitution itself stipulates that this right does not include organizing a strike and that failure to provide security during protests is a disguised strike and a breach of professional obligations.

Saied's proposal was a response to human rights advocates in Tunisia calling for police unions to be dissolved after events advocates believed were caused by the police unions. For example, the police interfered during artistic performances and threatened to default on providing security.

This comes against the backdrop of the refusal of police officers to protect a theater performance by actor Lotfi al-Abdali Aug. 7, claiming that it contained words and gestures that offend morals. Many Tunisians considered this incident as a sign of police encroachment on and interference in making decisions that are not within their remit.

The Tunisian Human Rights League warned in a statement Aug. 9 of "the dangers of the security apparatus entrusted with securing artistic performances turning into a censorship body controling public taste and freedom of art and creativity to the point of mimicking a parallel judicial body."

In a statement to the national radio station Aug. 8, spokesperson of the National Syndicate of Internal Security Forces Shukri Hamadeh said, “Chapter 226 of the penal code criminalizes indecency. From now on, we will not accept being a party to a moral crime.”

He noted that the security forces would withdraw "from any show that insults public taste." The statement sparked widespread controversy in the cultural arena and on social media platforms.

Hamadeh told Al-Monitor that the security unions rejected Saied's decision to establish a unified union structure under the Tunisian Union of General Internal Security Forces, because it affects freedom of union work and the right to organize.

He pointed out that the accusations against the unions of encroachment and pressure on the state are false. He wondered about the silence of human rights associations and civil society organizations about the material and moral attacks on security personnel during the exercise of their duties.

Hamadeh added that the police unions operate within the framework of their constitutional rights, and that they reject any form of violence and torture in prisons that affects the freedom of individuals. They are with holding anyone involved in torture crimes accountable.

On Feb. 1, 2021, during a protest in the city of Sfax, the secretary-general of the National Syndicate of Internal Security Forces , Zubeir Louhichi, asked security forces not to exercise restraint. He also launched a fierce attack on those he called “atheists” and “leftist enemies of Islam.” He accused human rights defenders and journalists of espionage.

On the other hand, head of the Tunisian Human Rights League Jamal Musallem, told Al-Monitor that he fears for the future of republican security in Tunisia in light of the pervasiveness and bullying of police unions, as well as their inhumane torture practices in prisons and detention centers, and the general culture of impunity they operate within.

Musallem said that these unions have a responsibility to defend the rights of their members in order to improve their working conditions and should not be a tool in the hands of politicians.

Journalist and political analyst Mohamed Bou Oud told Al-Monitor that the police unions that are now defying the Ministry of Interior and the president of the republic, and even interfering in art, morals and people's tastes, must be confronted with firm, strict and bold decisions before they cause security and political threats that affect people's lives, stability and security of the country.

In 2021, under the government of Hisham el-Mechichi, formed by the Islamic Ennahda movement and its allies, the police unions in Tunisia faced sharp criticism from human rights associations for their use of violence to push back the demonstrators who took to the streets due to the economic crisis. They were protesting inflation, high unemployment rates, the government’s suspending employment in the public sector and the gradual lifting of subsidies.

The International Monetary Fund called for reducing the cost of subsidies and limiting employees' wages. The Labor Union categorically expressed rejection of such measures considering that they affect the purchasing power of citizens.

Political analyst Mohamed Doueib told Al-Monitor that the public dispute between Saied and the police unions does not serve the stability of the country. He said, “The president’s call for unions to group under one umbrella is a step that will contribute to unifying the security forces and making them more effective."

A draft law to protect security personnel had previously aroused controversy after it was presented to parliament in 2015. At the time, it was withdrawn for further consideration and shelved until today due to concerns raised by human rights organizations that this law could be used to promote a culture of impunity and grant security personnel absolute immunity. The police unions insisted on passing it to enhance their performance and combat terrorism within an arsenal of laws that protects them.

It is important to note that these police unions were created by virtue of Decree No. 42 of 2011 dated May 25, 2011, which was issued under Prime Minister Beji Caid Essebsi for the first time. The decree gave police unions the green light to organize, operate and even appear on TV channels to defend their rights.