Intel: Russia sets up military positions in Syria’s Ain Issa after shelling from Turkish-controlled side 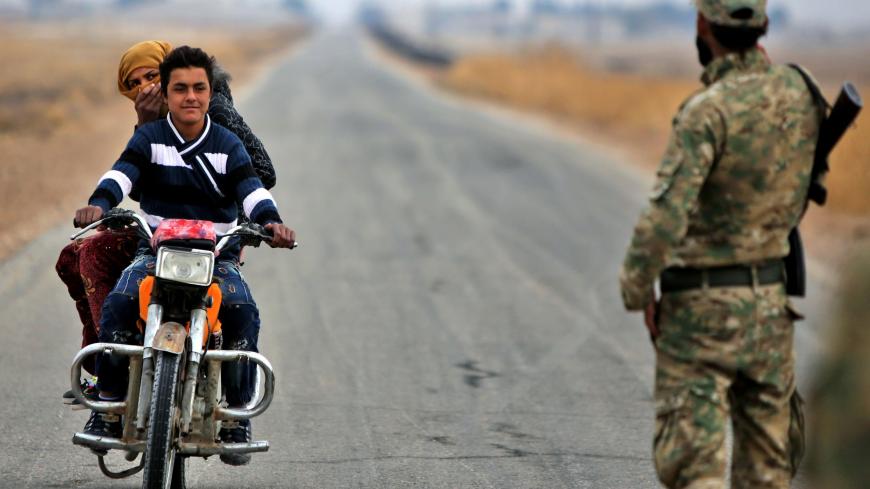 A Turkish-backed Syrian fighter mans a security checkpoint before an approaching motorcycle, along a road in the countryside outside Ain Issa in Syria's northern Raqqa province, on Nov. 29, 2019. - BAKR ALKASEM/AFP via Getty Images

Russia’s military will set up positions around the northeast Syrian town of Ain Issa as part of an agreement with the US-backed Kurdish-led Syrian Democratic Forces (SDF) to reduce attacks from Turkish-controlled areas nearby.

Riyadh al-Khalaf, the military council leader for Tal Abyad district in Raqqa province, said Tuesday that Russian forces will establish three positions in and around Ain Issa, Kurdistan 24 reported. Ain Issa is part of the district.

The move follows talks between the SDF and the Russians about the area. Asharq al-Awsat reported Monday that Russia’s military asked the SDF to fully withdraw from Ain Issa and hand the area over to Assad regime control, but that the SDF rejected the proposal.

Why it matters: Russian officials do not want an expanded Turkish military presence in northeast Syria, former special envoy for Syria James Jeffrey told Al-Monitor in an extensive interview Dec. 9. But Turkish pressure ­­­on the SDF gives Russia the opportunity to play peacemaker by moving into SDF-controlled territory.

The move comes after months of sporadic shelling from nearby areas controlled by Syrian militias backed by Turkey’s military. Turkey’s forces pushed into northeast Syria against the SDF last year after President Donald Trump ordered US forces out of the way after receiving word of Ankara’s imminent attack on the SDF.

Ain Issa, which lies on the M4 highway roughly 20 miles from the Turkish border, previously served as the administrative center of the SDF-affiliated autonomous administration that controls northeast Syria.

Senior US officials negotiated a cease-fire to halt Turkey’s incursion in mid-October 2019, though the SDF has repeatedly accused Turkey of violating the cease-fire. The US-led international coalition helped the SDF capture northeast Syria during the war against the Islamic State.

What’s next: US officials say they doubt Turkey will launch another incursion into SDF-held territory, but that has not prevented anxiety on the ground. "For more than ten days, there has been an unprecedented escalation on the part of the Turkish state in the Tal Tamr and Ain Issa regions," Ilham Ahmed, president of the SDF-affiliated Syrian Democratic Council's executive committee, wrote Thursday on Twitter. "We call on the guarantor countries to oblige Turkey to abide by the ceasefire agreement."

The SDF has frequently been torn between continuing to rely on the United States or turning to Russia for protection. Meanwhile, the United States is intent on holding its curtailed position in Syria, where roughly 900 troops control key roads and help to guard coveted oilfields that benefit the SDF.

Jeffrey’s successor, special envoy Joel Rayburn, told Congress on Wednesday that US policies are on track in Syria, and Washington's objectives remain within reach.

Rayburn also said the US government would likely extend Caesar Act sanctions to non-Syrians in the future as part of its effort to isolate and cripple the regime of Syrian President Bashar al-Assad.