Misinterpretations of a music video shot in the area of a West Bank holy site cause anger, an arrest of the DJ and the burning of furniture to be used for the development of cultural tourism at the location. 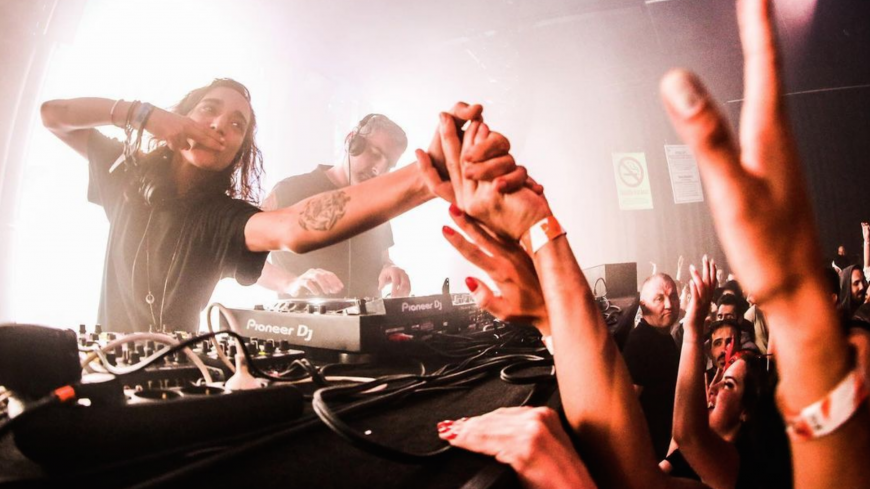 A techno music video shoot held at a Palestinian religious and touristic site has landed a 29-year-old female DJ in a Palestinian jail and is threatening to have the minister of tourism and Islamic affairs fired.

The event took place Dec. 26 — the day after Christmas — and, when selected videos of the event were circulated on social media, some users claimed the organizers were Christians defiling a Muslim holy site. The event took place near the Nabi Musa mosque.

It later became clear that the event was licensed by the Palestinian minister of tourism and was intended for a video shoot in Palestine to be featured in an international music event for Beatport that was livestreamed on Twitch.tv, a music and gaming site for young people. The location is between Jericho and Jerusalem, and became popular as a location for cultural events in the 20th century. A mosque in the compound had been erected to give travelers an opportunity to pray on their way between the two locations.

Sama’ Abdulhadi, the event producer from Nablus who had organized and led the concert with members of her family and friends, was arrested by the Palestinian police in Jericho as social media was buzzing with attacks against the event and those who permitted it. Members of the Abdulhadi family issued a statement saying the DJ had received a permit from the Ministry of Tourism and that the event was held in a section away from the mosque in an open area with no more than 30 people in attendance. Her family vehemently denied that the concert was a "devil worshiping" event as some had stated on social media. Palestinian activists are calling for the resignation of the ministers of tourism and Islamic affairs.

Palestinian Prime Minister Mohammad Shtayyeh announced Dec. 26 the creation of an investigative committee to look into the incident. A Jericho court extended Abdulhadi's detention Dec. 29 for 15 days on charges of desecrating a religious site and violating emergency health regulations.

Serene Hulleilh, a relative of Abdulhadi, told Al-Monitor that her niece is being "scapegoated" to avoid criticism of the government. “Why did they arrest her and extend her detention? She is not a criminal, she is not going to escape and they are not investigating anything. This was not a concert but a made-for-TV event that was supposed to give Palestine a place in the world music scene. Everything is filmed and available online, they could find everything on it,” she said. Sama’ Abdulhadi is the granddaughter of one of the founders of the PLO, Essam Abdel Hadi, a leader of the Palestinian women’s movement.

Ammar Dwaik, the director of the Independent Commission for Human rights, issued a statement Dec. 29 calling for Abdulhadi’s release and placing the blame on the Ministry of Tourism. “The Ministry of Tourism erred twice. They erred when they gave permission and they further erred when they remained quiet and attempted to avoid responsibility, leaving Sama’ exposed to the bullying of social media activists,” he said. Dwaik said the arrest of Sama’ was "arbitrary" and an attempt to quell public anger.

Rakan Sawalha, a 24-year-old techno music producer and event organizer from Jordan also known as “Roo,” told Al-Monitor that originally techno referred to music that traces its origins in the 1980s in Detroit, “but it has grown since and is now described as an underground electronic dance music genre that has been popularized worldwide in recent years by the likes of famous DJs and event brands adopting the genre."

Roo said Abdulhadi “is a high energy DJ and music producer often referred to as the queen of techno music in Palestine.” Abdulhadi achieved international fame and recognition after appearing on BoilerRoom’s Palestinian showcase that was streamed live on YouTube. The showcase aimed to narrate the story of the emerging techno scene in Palestine despite the difficulties of the occupation.

After videos of the Dec. 24 event went viral, young people from Jerusalem went to the site and destroyed furniture that was in an area that was supposed to become part of a hotel. Group Muslim prayers were also held at the location as a sign of anger at what happened.

Simon Azazian, the editor of the monthly magazine “Jerusalem unites us,” told Al-Monitor that what happened in Nabi Musa is a reflection of the split personalities that Jerusalem's Palestinian young people are suffering from. “They have opposing directions. Some want to be socially liberated while the other stream wants to be extreme on national and religious issues,” he said.

"The first group knows that they are under Israeli occupation but wants to emulate the occupiers socially and culturally, while the other goes to the other extreme,” Azazian added.

The turmoil at the Nabi Musa complex came at the same time that a memo by the Hamas-controlled Islamic waqf urged preachers to speak out against the “Christmas” spirit that was prevailing in Palestine. Christmas trees in the Galilee town of Sakhnin were burned down by unknown arsonists and a man was filmed on video making fun of the Church of the Nativity and the public Christmas tree in Bethlehem.

Political and social leaders have denounced all these actions, but they reflect a dangerous cultural and religious schism that is causing a deep cut in the social fiber of Palestinians. The reaction by the various political and social leaders has been quick but haphazard as the cause of Palestine is being diverted to internal squabbles, social and religious fights and internal ruptures. A serious look into these issues and their meaning is required to be followed by a strategy of ensuring that these problems are properly and seriously addressed.