Turkey's Ministry of Culture and Tourism is investigating a concert at Sumela Monastery after Athens and the Orthodox Patriarchate complained of disrespect to the venue. 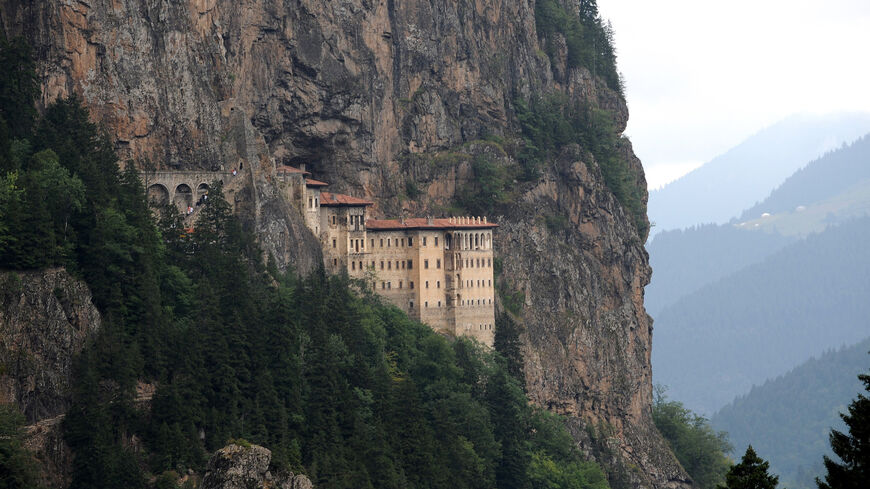 The long list of conflicts between Ankara and Athens, from eastern Mediterranean maritime zones to Syrian refugees frozen to death at the Greek border, have a new addition: young DJs at a fourth-century Christian Orthodox site in northern Turkey.

On Wednesday, following a protest from Athens over the “desecration” of the UNESCO-listed Sumela Monastery, Turkey’s Tourism and Culture Ministry opened an inquiry into an electronic music concert that took place there at the end of January.

In the steep mountains of Turkey’s northern Black Sea region, Panagia Soumela Monastery — as it is called in Greek — dates to 386 AD. The majestic structure, located in the northern city of Trabzon, drives thousands of tourists from Greece every year, including those whose ancestors have lived in Turkey before the population exchange of 1923. They regard the visit as a “pilgrimage” to their ancient home.

President Recep Tayyip Erdogan, whose family hails from the nearby Black Sea city of Rize, has repeatedly referred to the monastery’s restoration as a symbol of Turkey’s commitment to protecting its non-Muslim heritage.

“If we were a nation targeting the symbols of other beliefs, the Sumela Monastery, which we have had for the last five centuries, would be gone forever,” Erdogan said in a video conference on July 28,  2020. The event, marking the second phase of the monastery’s restoration, dovetailed with the first Friday prayers at Hagia Sophia. Using the occasion in Sumela to address criticism over the conversion of the 1,500-year-old Hagia Sophia from museum to mosque, Erdogan pledged that the Orthodox would be able to perform religious services for the Litany of the Blessed Virgin Mary in Trabzon on Aug. 15, when the faithful believe that Mary rose to heaven after her death. Ceremonies were held in 2020 and 2021, with visitors from Greece.

When footage of a musical event in the Sumela Monastery’s courtyard hit social media over the weekend, it drew an angry reaction from Athens. “The recent images that appeared on social media … constitute a desecration of this monument,” the Greek Foreign Ministry said in a statement on Feb. 7, expressing “surprise” that a band was given permission to perform in the complex, which is normally only open to pilgrims.

“These images are offensive and add to a series of actions by Turkish authorities against World Heritage Sites,” it added, alluding to Hagia Sophia’s conversion.

The Greek statement was followed by a letter from Patriarch Bartholomew I, the Istanbul-based spiritual leader of roughly 300 million Orthodox Christians, to Culture and Tourism Minister Mehmet Nuri Ersoy. The letter described the incident as an insult and said that the permission granted to hold the event was “incompatible with its religious character and its history.”

The Culture Ministry appeared to pin the blame on the local authorities, saying that permission was granted by the office of the governor and the local tourism office without consultation with Ankara. The ministry sent its inspectors to the city Wednesday to determine who authorized the concert, which had also been criticized by some of the locals as inappropriate.

The organizers defended the event. “I honestly do not see why there is so much ado about this,” Cengiz Can Atasoy, one of the DJs, told Al-Monitor. “Concerts like ours take place in historical places all over the world. We had all the permits. I took the utmost care to select the pieces that I considered suitable to this impressive venue. We discussed the project in detail and agreed among ourselves that we would not use base in order not to create a rumble.”

Atasoy said that they had obtained permission with the help of Ahmet Senterzi, a local DJ in Trabzon, a conservative city with a reputation as a hotbed of nationalism despite its multicultural and multiethnic past that included Pontic Greek and Armenian residents. The city’s role in recent history is troubled: the teenaged gunman who shot Turkish-Armenian journalist Hrant Dink in 2007 was from Trabzon, and a Catholic priest was killed here in 2006.

Atasoy stressed that they wanted to honor the multicultural character of the region through their “Pontica Project,” derived from the ancient Greek name of the Black Sea.

“The team was well-known organizers; we are not a pirate degenerate band. I am half-Armenian myself. We were doing a project to promote the monastery, not to disrespect it,” he said.

Axel Corlu, a historian who recently wrote an academic paper on the conversion of the Hagia Sophia, said whatever the intentions of the organizers, the images that emerged in the media were inappropriate. “The Sumela is not an amphitheater like Ephesus [an historical site on Turkey’s Western coast], which has always been a venue of performances," he told Al-Monitor. “It is a symbolic place for a community and a culture that has been destroyed.”

Despite their political issues, Greece and Turkey share a desire to boost post-pandemic tourism. In November 2021, the tourism ministers of the two countries came together at the Aegean port city of Izmir for a tourism forum. Ferry lines between Turkey and the Greek islands resumed operation on Feb. 8 after two years of interruption. Before the restrictions, approximately one million passengers were transported annually by ferries between the two coasts of the Aegean.