Elham Khazen has become the first Arab woman to run for the Israeli presidency. 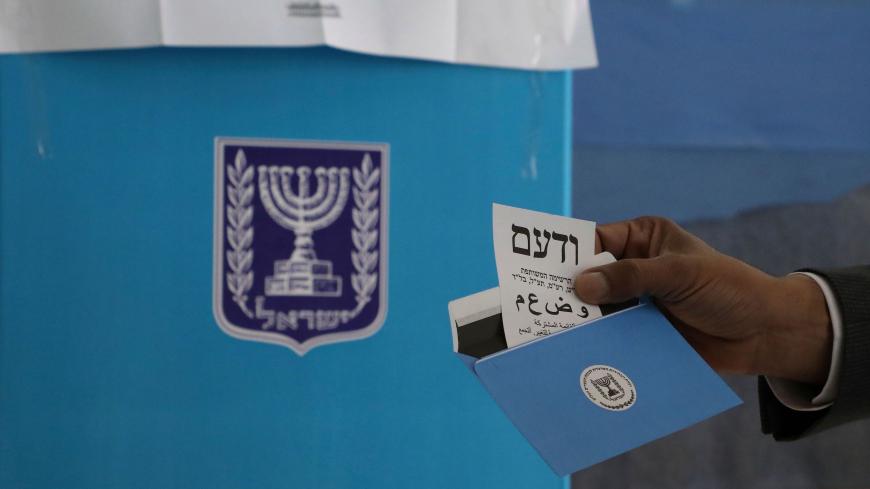 Knesset member and Joint List candidate Said al-Harumi votes in the Bedouin town of Segev Shalom or Shaqib al-Salam near the southern Israeli city of Beersheva on March 2, 2020. - HAZEM BADER/AFP via Getty Images

Azmi Bishara, then chairman of the Balad Party, was the first and until now only Arab citizen to run for prime minister of Israel. Things were different in 1999. There were direct elections for the office of prime minister, regardless of the candidate’s party affiliation. Then, two days before the election, Bishara withdrew his candidacy, citing a variety of reasons.

Three decades later, Arab businesswoman Elham Khazen from the northern town of Bi’ina announced her plans to run for president. Khazen, who owns a chain of pharmacies and a clinic in the town of Sakhnin, is the first Arab woman to run for the largely ceremonial position.

What are Khazen’s chances? Will she win the support of 10 Knesset members with her natural base? The Arab Joint List is in no rush congratulate her. As of the time of writing, they have yet to respond to her announcement at all. The delay could be the result of Khazen’s previous political activity. During the last March 2020 election, she served as head of the Blue and White Party’s Women in Arab Society division and in a previous election she ran in the Labor primary.

Khazen admits that the mission is going to be tough, but finds it well worth the effort. “I think that this is an important step forward. It should have been done long ago by others to prove that we [Arab citizens of Israel] are in the game and part of the state. We tell everyone that we are citizens just like everyone else, and it is our right to demand full equality. I see no other option but to partner with the Jewish sector here.”

Asked about her chances given the Knesset's preference for internal candidates, Khazen said, “I realize that my chances aren’t as high as I would like, but it is enough to just participate in the race. I plan to work hard and I have quite a few relationships with Jewish Knesset members. I have already asked the prime minister to support my candidacy in order to show that he has nothing against the Arab public and that he supports boosting the status of Arab women in the country. Similarly, I approached my own party, Blue and White. While I am not sure that everyone will support me, some of them might.”

Khazen says she expects all Joint List members to vote for her — that is, if they are really concerned about Arab society and the status of Arab women. “They must not repeat the same mistakes they made by voting against the normalization agreements with the United Arab Emirates and Bahrain. It is true that I am not a member of the Joint List, but they need to support me because I am an Arab citizen and the role of president transcends party lines. I have support from Arabs and Jews alike. Even … Fatah’s Committee for Interaction with Israeli Society called to encourage and support my move. In fact, they invited me to meet with them in Ramallah next week.”

Is this venture meant to build her candidacy when she runs for the Knesset again? Bishara had admitted as much at the time of his run, saying, “My candidacy is a bargaining chip.” Khazen said, “All options are on the table. If there is a party that I find compatible in terms of my worldview, then why not? We need to open up to the rest of the country and not to limit ourselves to the Joint List.”

Based on reactions among the various social media platforms, she seems to be getting quite a bit of non-partisan support. On the other hand, there are inevitably those who ridicule her efforts, saying she doesn’t have a chance and is wasting her time.

Afify Haj Abu Ghanima is a teacher and consultant from the town of Iblin. She told Al-Monitor, “What we have here is a woman who thinks that she is suitable for the job and that she has the skills needed to get to the president’s residence. So why not support her? This attempt may yet contribute to our society in the future. That is why I am so taken aback by those people who mock her efforts and act disrespectfully toward her.”

As manager of the Arabic-language Hala Channel, Bassam Jaber first revealed Khazen’s plan to run. He told Al-Monitor, “I appreciate that she had the courage to make such a far-reaching decision, given that she is both a woman and an Arab. Elham Khazen shattered all sorts of glass ceilings and norms. Let the results be what they are. This very wise woman already opened the door, showing how far an Arab woman can go in the State of Israel.”