An administrative Moroccan delegation arrived in Israel to reopen the liaison office following normalization of ties between the two countries. 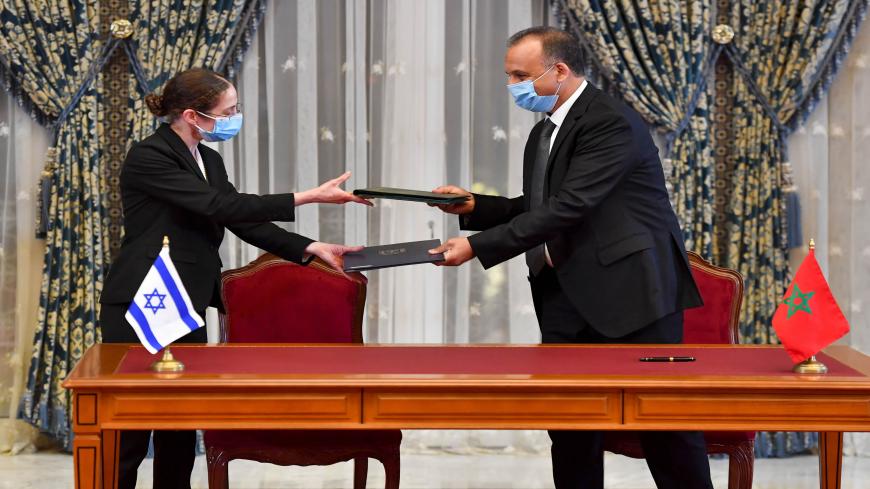 A delegation of Moroccan officials landed today in Israel. Israel’s military radio reported that the administrative delegation arrived to the country in order to inspect the building that hosted in the late 1990s the Moroccan liaison office. Rabat had preserved the Tel Aviv office even after severing ties in 2000, when the second intifada broke out. Israel had also kept the offices it used in Rabat before ties were severed, and had paid over the years for their maintenance.

A Moroccan source had told i24news on Sunday that the Moroccan delegation "will work with Israeli counterparts on issues including launching direct flights between the two countries and establishing embassies." Other reports noted that the delegation is also expected to prepare the visit of a more senior Moroccan delegation. The senior delegation should arrive in Israel later, with the date still undetermined. The Moroccan officials were set to meet today in Jerusalem with Foreign Ministry officials, but are not scheduled for any public event.

On Saturday night, Israeli Prime Minister Benjamin Netanyahu announced in a video shared on his Twitter account that a Moroccan delegation was set to arrive to Israel at the beginning of the week. He also invited the Moroccan king to visit Israel.

With Israeli and Moroccan flags and a map of the region in the background, Netanyahu said, "Yesterday I had a historic conversation with the King of Morocco, Mohammed VI. We agreed that the Moroccan delegation will arrive to Israel already at the beginning of the week in order to advance everything: the opening of [liaison] offices, advancing the opening of embassies, direct flights from Israel to Morocco and back. The conversation was very warm, very moving. We spoke in Arabic — though my Arabic is not very good — in Hebrew, in French — the king speaks that perfectly, and also in English. But the main thing was the emotions, the warmth. When we ended the conversation, I told him, 'Your highness, I want to finish our talk with the ending line of a movie I really love — 'Casablanca.' I think this is a beginning of a beautiful friendship.’ We both laughed."

A joint Israeli-American senior delegation visited Rabat Dec. 22 and met with the king, marking the renewal of ties between Israel and Morocco. During the visit, Foreign Ministry director general Alon Ushpiz met in Rabat with  counterparts in the Moroccan Foreign Ministry, and signed several cooperation agreements. A day after the visit, Ushpiz posted a video of the Old City walls in Jerusalem lit with Israeli and Moroccan flags, stating, "Following the historic visit to Morocco’s beautiful capital Rabat, the mesmerizing walls of the Old City of Jerusalem will be lit with the flags of Morocco and Israel, in a message of friendship between our two peoples."

Renewal of ties with Morocco, the imminent opening of mutual liaison offices and expected direct flights are extremely significant for Israeli society, with a large community originating from Morocco.