For Prime Minister Benjamin Netanyahu, renewal of ties with Rabat means one thing: possible support of hundreds of thousands of Israelis of Moroccan origins. 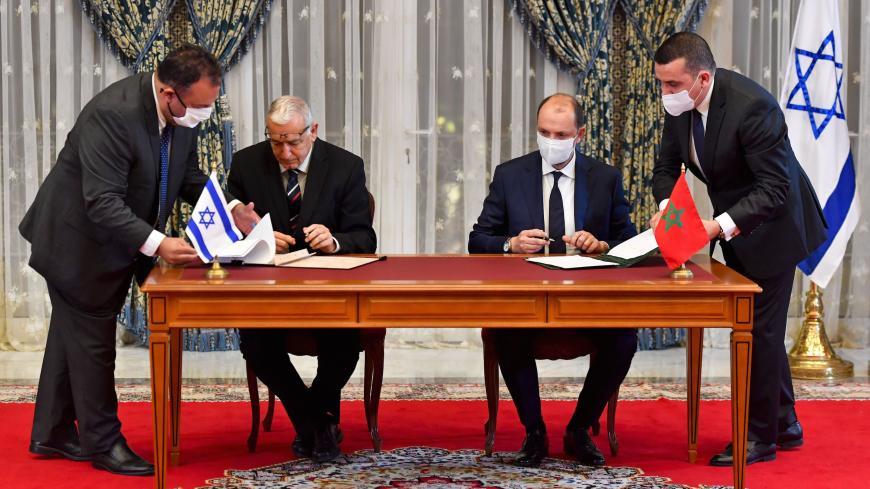 Shlomo Mor-Yosef (L), the director general of Israel's Population and Immigration Agency, and Mohcine Jazouli, the minister delegate to Morocco's minister for foreign affairs, sign an agreement at the Royal Palace in the Moroccan capital, Rabat, on Dec. 22, 2020, on the first Israel-Morocco direct commercial flight, marking the latest US-brokered diplomatic normalization deal between the Jewish state and an Arab country. - FADEL SENNA/AFP via Getty Images

As they headed on Dec. 22 to Rabat for the official signing of the Israel-Morocco normalization agreement, talk among the Israeli and American passengers on the first ever direct commercial flight from Tel Aviv to the Moroccan capital was about “the fifth state.” The agreement between Israel and Morocco is the fourth target in the peace and normalization blitz launched earlier this year by President Donald Trump. Trump’s team, led by his top adviser and son-in-law Jared Kushner, the director of Israel’s National Security Council, Meir Ben-Shabbat, and his team and Foreign Ministry Director General Alon Ushpiz dedicated most of the 5½-half hour flight to ongoing efforts to rope a fifth Islamic state into the normalization campaign before Trump leaves office. They may not make it, but at least they will have tried. “The less we talk about a fifth state, the better the chances of it happening,” Ushpiz told Al-Monitor.

For Prime Minister Benjamin Netanyahu, Morocco is the jewel in the crown. With all due respect to the Gulf principalities and the recent agreements they have forged with Israel, hundreds of thousands of Israelis of Moroccan ancestry make up an enormous electoral pool. Netanyahu believes that many of them are part of his political base.

The normalization agreement brought these clandestine ties into the open and provided them with an official stamp of approval. Israelis will now be able to fly directly to Morocco (rather than through Europe) and visa procedures will be simplified greatly. The timing for Netanyahu could not have been better, coming as it does just as he plunges Israel into a fourth election in less than two years. It is scheduled for March 23.

The renewal of diplomatic ties will be speedy. Israel and Morocco will soon open liaison offices — in Rabat and Tel Aviv — verging on embassies, but not quite. “We still have a building in Rabat, on Mehdi Bin Barka Street,” Ushpiz said. “And they have a facility in our country, in Tel Aviv. All that remains is to open them and start work.”

The Israeli-American team on the historic first flight, symbolically numbered 555 to reflect the digit considered a lucky number by many North Africans, met with senior Moroccan officials, including the king. Unlike the Emiratis and Bahrainis, who signed their September agreements with Israel at a festive White House ceremony in the presence of Trump and Netanyahu, the Moroccans opted for a low-key affair. There is no shortage of Moroccan opponents to normalization with Israel and the king, as one senior Israeli diplomatic official said on condition of anonymity, “does not want to poke a finger into anyone’s eye.” The official excuse was that the sides were renewing a previous agreement rather than forging a peace treaty. That’s all.

Nonetheless, complex turf wars are being waged behind the scenes over the Moroccan jewel. It started out with a dispute between Mossad chief Yossi Cohen, whose agency was tasked with the clandestine ties with Morocco for decades, and Ben-Shabbat, who enjoys two distinct advantages: His office is close to Netanyahu’s and he was born in Morocco and speaks fluent Moroccan Arabic. Ben-Shabbat won out when he led the Israeli delegation to Rabat this week and even greeted the king in his own language.

Another senior Israeli diplomatic official, asked about the monarch’s reasons for restarting the official relationship with Israel, said the prime motivating force was the US recognition of Moroccan sovereignty over Western Sahara. “This is a dearly held quest for the king. He knew that once Trump goes, it would never happen and decided to strike as long as the iron was hot,” he said on condition of anonymity.

Asked who should be credited for the move, the official responded: “Kushner. Undoubtedly. This is first and foremost a Jared Kushner project. His crazy drive in recent months, his unbridled storming of the entire Muslim world in order to mobilize as many members as possible for the peace campaign.”  Asked whether Kushner’s drive stemmed from his love for Netanyahu, his desire to please Trump with the Nobel Peace Prize or clever planning for business projects on which he intends to embark after January, the official responded: “It’s all three, combined, but there is no denying that Kushner is truly committed to Netanyahu. It starts there. Clearly, a Nobel Peace Prize will help Trump battle the lawsuits awaiting him once he leaves office as well as with his future reelection plans. And business? Well, this family has always loved doing business.”

What comes next? “Netanyahu cares about one thing only,” an associate of the prime minister told Al-Monitor on condition of anonymity. “To arrange a state visit to the king before March 23. As far as he is concerned, the ties can be severed once again right after the elections. Such a visit would be worth quite a few Knesset seats and could have the same effect as Netanyahu’s March 2015 address to Congress, two weeks before [Israel's] elections, designed to torpedo President Barack Obama’s nuclear agreement with Iran. This would be his victory photo, and President Trump will have made it possible now, during injury time.”

A pre-election Morocco visit is not guaranteed, although prospects are looking good. The kingdom is not bound by the same unwritten rules of protocol that prevented US administrations (until Trump) from interfering in domestic Israeli politics. Netanyahu, as always, will squeeze every last drop from the succulent Moroccan date he picked on the eve of the toughest, most crucial elections he has ever faced. Will it suffice? Probably not, although there is no telling with Netanyahu. Stranger things have happened.