Was UAE behind Israeli decision to allow Palestinian farmers access to Jordan Valley?

For the first time in 46 years, Israel allowed Palestinians to enter al-Qa'oun valley in the northern Jordan Valley to cultivate their land. Despite the Palestinian Authority’s statement that this was in implementation of a judicial decision, Al-Monitor received information about Emirati-Israeli understandings that led to this action. 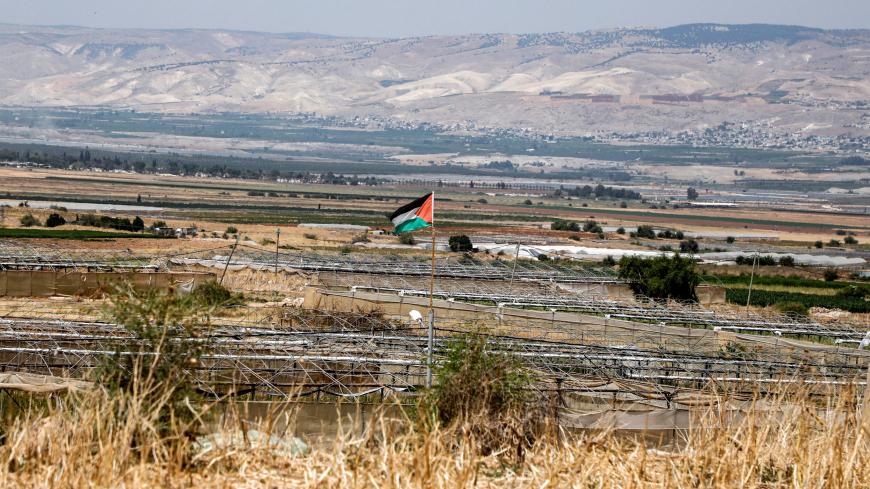 This picture taken on June 21, 2020 shows a Palestinian flag flying in the village of Bardala in the Jordan Valley in the occupied West Bank, with Jordanian villages east of the Jordan river seen in the background. - JAAFAR ASHTIYEH/AFP via Getty Images

GAZA CITY, Gaza Strip — On Dec. 28, for the first time in 46 years, Israel opened the security gate separating al-Qa'oun valley in the northern Jordan Valley from the Palestinian village of Bardala, allowing Palestinian farmers to cultivate their land there in implementation of an Israeli judicial decision.

The last time the residents of the village of Bardala entered their land in the Jordan Valley was in 1974. They were subsequently prevented from entering the area following a decision of the Israeli army, which considered it a “closed military zone.”

The land was granted to settlers to cultivate and benefit from.

However, an agreement was recently concluded between the Palestinian and Israeli sides to open and rehabilitate a road between the village of Bardala and al-Qa'oun valley and grant access to Palestinian farmers.

Tawfiq Jabareen, a lawyer who represented the Colonization and Wall Resistance Commission and the local councils at Israeli courts in the case of the al-Qa'oun valley lands, told Al-Monitor, “The Palestinians submitted a case to the Israeli judiciary to regain access to the land of the valley in 2015. In September 2017, we managed to have the Israeli Supreme Court issue a ruling requiring the eviction of settlers and the return of land to its Palestinian owners.”

The judicial ruling, however, was not implemented, he added.

“Political and diplomatic pressure exerted by the Palestinian Authority on Israel has forced the latter to finally implement the ruling,” he said.

Some 1,380 dunums in ​​al-Qa'oun valley owned by approximately 300 Palestinian families have been restored.

About 65,000 Palestinians live in 34 localities in the Jordan Valley, while 13,000 settlers live in 38 settlements in the area.

Bassam Sawafta, a farmer who was driving his tractor into al-Qa'oun valley to do some plowing, told Al-Monitor, “My father dreamed of reclaiming his land here, but he died years ago before his dream came true. Today I am fulfilling his dream of cultivating this land.”

He said Israel allowed the entry of 20 farmers to cultivate their land from 10 a.m. until 3 p.m..

Sawafta said Palestinians need an Israeli permit every time they wish to go to their land, as it is located in an Israeli military zone.

Moataz Bisharat, the Palestinian official in charge of the Jordan Valley’s Israeli settlements file at the PA, told Al-Monitor, “The PA is to implement a set of projects aimed at supporting farmers in the area.”

He added, “The restoration of the valley deals a blow to the settlers who have been for years stealing the land’s resources. This very act also reveals the sluggishness of Israeli judicial institutions when it comes to implementing settlement decisions at the expense of Palestinians.”

Bisharat said the PA intends to resort to the Israeli courts to demand compensation for the al-Qa'oun valley landowners who were deprived of the use of their property for years.

Although Palestinian officials have indicated that the restoration of land to its Palestinian owners in the valley was the result of diplomatic pressure on the PA's part, a prominent leader in the Democratic Reformist Current told Al-Monitor on condition of anonymity, “Returning this valley to its Palestinian owners came following Emirati-Israeli understandings.” The current is headed by Mohammed Dahlan, who was expelled from Fatah and who is based in the United Arab Emirates.

On Aug. 13, the UAE announced a normalization deal with Israel after the latter agreed to suspend its plans to annex large parts of the West Bank and the Jordan Valley.

The Democratic Reformist Current leader added, “The UAE policy regarding the Palestinian-Israeli conflict has led to the cessation of one of the most dangerous Israeli projects against the Palestinians, namely the annexation of the Jordan Valley, among other large areas of the West Bank, to Israeli sovereignty to consider them as part of its future borders.” He said UAE-Israeli understandings would lead to the return of more Jordan Valley land to the Palestinians soon.

Ahmed Rafiq Awad, a media and political science professor at Al-Quds University, told Al-Monitor that Israel allowed Palestinian farmers to enter their lands in al-Qa'oun valley in order to advance normalization deals with other Arab countries.

He indicated that other Israeli decisions aimed at facilitating the lives of Palestinians or restoring part of their stolen rights in the West Bank would calm the Palestinian public and official anger toward the UAE and other countries that have concluded or will conclude future normalization agreements with Israel.

Awad said Netanyahu would rather conclude more normalization and peace agreements with Arab countries than annex the Jordan Valley and parts of the West Bank.

“Netanyahu believes that any future peace deal with the Palestinians will be less expensive for the Israelis in light of peace agreements concluded with influential Arab countries in the region,” Awad said.