Iraqi banks have undertaken reforms, coinciding with the Iraqi government's measures to reform the economy. 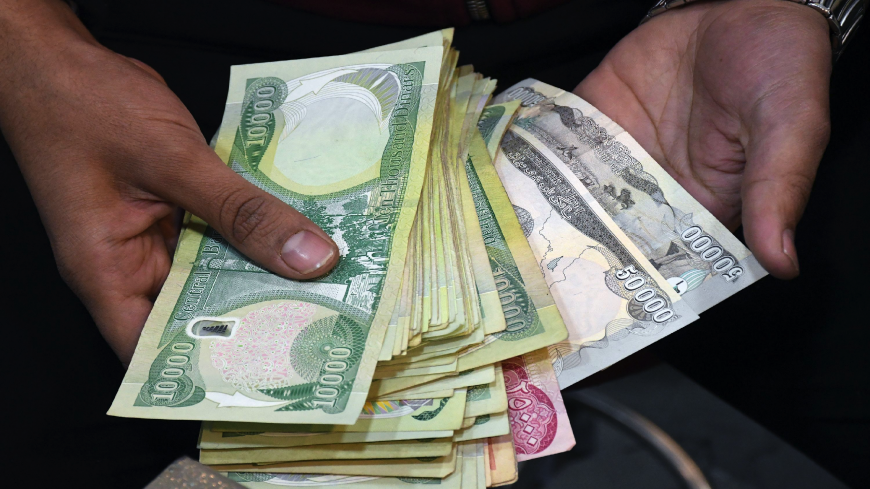 An employee of a currency exchange counter shows a stack of local currency banknotes in the southern Iraqi city of Nasiriyah in the Dhi Qar province, on Dec. 20, 2020. A year of economic agony for pandemic-hit and oil-reliant Iraq is drawing to a close, but a draft 2021 budget involving a hefty currency devaluation could bring more pain for citizens. Iraq, which relies on oil sales to finance 90 percent of its budget, projects that its economy has shrunk by 11% this year, while poverty doubles to 40% of the country's 40 million residents. - ASAAD NIAZI/AFP via Getty Images

The Central Bank of Iraq announced in a statement Dec. 19 the devaluation of the Iraqi dinar to 1,450 to help reduce the country’s fiscal deficit in the state budget for 2021 from 70 trillion to nearly 30 trillion dinars.

Simultaneously, Iraqi banks have undertaken additional measures to optimize the Iraqi economy. In the past weeks, government banks intensified calls for citizens to deposit their money in their bank branches instead of hoarding it at home.

Local media published calls by Rasheed Bank and Rafidain Bank along with the interest rates they pay for deposited money.

In less than a week, state-owned Rafidain Bank raised the interest rate on deposited money from 4% to 5% so as to encourage people to deposit funds in Iraqi branches.

Rasheed Bank, however, is paying a 7% interest rate on fixed deposits for 2.5 years. Rasheed Bank's offer involves individuals, businesses, associations and other sectors.

According to the Central Bank, funds citizens have hoarded at home are estimated at 77% of those circulating in the local market.

Rasheed Bank, established in 1988, and Rafidain Bank, which opened in 1942, are the largest government banks in Iraq and have branches in most of the 18 Iraqi governorates.

The two banks, among others, have faced financial pressure due to government borrowing as a means to meet the large financial deficit the country has suffered since the outbreak of the COVID-19 pandemic and the drop in oil prices, which is Iraq’s main source of revenue.

Rasheed Bank spokesperson Amal Shuwaili told Al-Monitor, “Our bank is trying to raise awareness among citizens about the importance of depositing money in banks.”

Shuwaili does not have stats on deposits after the call was made, but she pointed out that the bank is increasingly opening new accounts and more and more funds are being deposited.

She explained that “the interest rates are withdrawn on a monthly, not a yearly basis" and "the funds will be protected at all times.”

The Iraqi banking system is underdeveloped, as Iraqis still pay most of their daily financial transactions in cash.

Salary domiciliation for ministry and state institution employees started a few years ago; banks provided them with debit cards, enabling them to withdraw cash.

Amer Abd Ali, an employee at the Interior Ministry, noted that he only believes in cash and withdraws his entire salary as soon as it enters the account.

He explained to Al-Monitor, “I can only use the card in specific places. … To be honest, I do not trust the banks with my money.”

Citizens' lack of trust in banks is the main reason behind hoarding money, but it is not the only reason.

Bureaucracy prevails over the banking system, especially government banks, when it comes to opening new accounts and depositing funds. Add to that the interest rate depositors receive.

Shuwaili affirmed that, on the contrary, "… We have started to reduce this bureaucracy, and things have become easier now." Depositing funds "has become an easy task … but money withdrawal may seem a complicated process for clients. This process is designed to protect the money. Is it a kind of bureaucracy to ask for the client’s ID?” she added.

Shuwaili attributed Rasheed Bank's call to its ambitious plan to increase loans and encourage investments. “That is why Rasheed Bank is encouraging clients to deposit their hoarded funds.”

Shuwaili's remarks did not seem to be in line with the international data on the Iraqi government banks’ participation in boosting investments and the economy.

According to the World Bank, only 5% of small- and medium-sized enterprises obtained loans from local Iraqi banks, while businessmen and investors borrowed from family and friends to bridge their financial deficits or expand their businesses.

Iraq was ranked 172 out of 190 in the World Bank's Ease of Doing Business Index, followed by poor countries devastated by war, such as Syria and Afghanistan.

Nabil al-Marsoumi, professor of economics at the University of Basra, said that "the banks’ calls on citizens does not seem more than a prelude to a new round of government borrowing from these banks."

Marsoumi, who has written research papers on the defects of the Iraqi economy, identified major defects in the banking system including bureaucracy, underdeveloped e-systems and the fear that these banks could collapse at any moment due to the stifling financial crisis that Iraq is going through. He indicated to Al-Monitor, however, that “Iraqis deposit their money in neighboring countries due to the interest rates — in Turkey and Iran, for example, which are higher than those in the Iraqi banks."