Hamas walks back 'Christmas ban' in Gaza after uproar

A memo leaked from the Hamas-run Ministry of Religious Endowments and Affairs in the Gaza Strip taken as a ban on Christmas and New Year festivities outraged Christian and Muslim Palestinians alike. 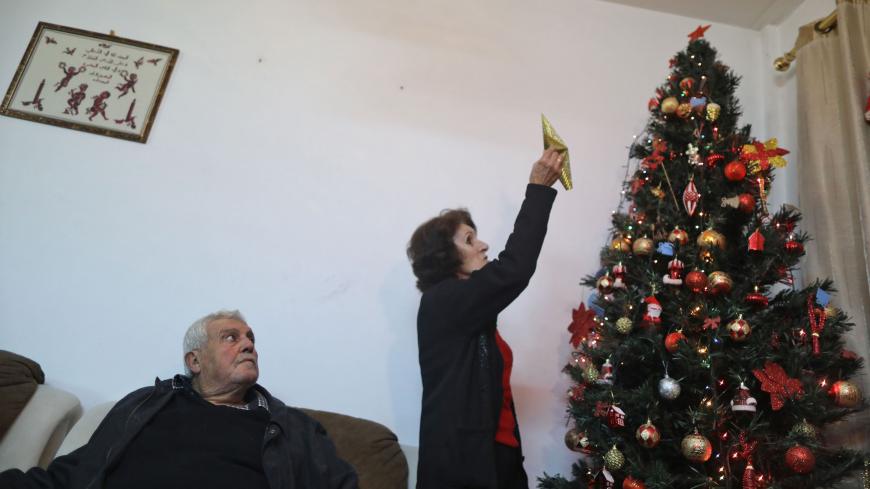 Nabil el-Salfiti looks on as his wife Faten (R) places the star on top of a Christmas tree at their home in Gaza City on Dec. 22, 2019. - MAHMUD HAMS/AFP via Getty Images

GAZA CITY, Gaza Strip — In an internal circular, the Hamas-led Ministry of Endowments and Religious Affairs in Gaza laid out steps Hamas was taking to “limit interaction” with Christmas and New Year’s festivities. The document dated Dec. 15 contained various steps to prevent or discourage Muslim Gazans from involvement in the traditional festivities, calling for fatwas and outreach activities to inform Gazans that Christmas celebrations are for Christians and not Muslims. Many Gaza residents took it as a ban on Christmas celebrations and called on the ministry to reverse its action immediately.

The Palestinian Authority, some national factions and civil society activists issued statements condemning the news. Palestinian Minister of Civil Affairs Hussein al-Sheikh tweeted Dec. 19, “The decision to ban Christmas festivities in the Gaza Strip is unjust and does not reflect the religious, national and social ethics of our people. It propagates radicalist and unjust thought and strikes at the foundations of our people’s unity, respect for beliefs and religions and the freedom of opinion and belief.”

Director of Pal-Think for Strategic Studies in Gaza Omar Shaaban commented in a Dec. 19 Facebook post, “The statement of the Ministry of Religious Endowments and Affairs in Gaza regarding the Christmas celebrations violates Palestinian law, deals a blow to the social fabric and threatens national unity. Such a statement can only reflect a self-centered mentality.”

Palestinian journalist Fathi Sabbah posted on Facebook that the communiqué was a national offense. He called on the Hamas ministry to rescind it and apologize. He added, “The factions should intervene to create rules that ensure this will not recur. We are one people, Christians and Muslims. Their holidays are ours, and our holidays are theirs.”

In the wake of the criticism, Hamas released a press statement Dec. 21 reading, “The close ties with our Christian brothers and sisters are not a result of a political stance or tactical assessment under certain circumstances. We are all the citizens of one nation, and they have full citizenship in terms of rights and duties.”

It went on, “What happened was a mistake in an administrative circular in the ministry, and it was poorly formulated” and condemned what it called exaggeration and pretense of moral superiority by some critics.

The statement added that Hamas has no problem rectifying mistakes or offenses and noted that it has strong ties with all Christian sects and churches at home and abroad.

Around a thousand Christians in the Gaza Strip, 70% of whom are Greek Orthodox and the rest Roman Catholics, celebrate Christmas with prayer in churches. Israel has banned most of them from traveling to Bethlehem due to the blockade on the Gaza Strip since 2007. The coronavirus-instigated lockdowns in the Palestinian territories are another encumbrance.

Spokesman for the Ministry of Religious Endowments and Affairs in Gaza Adel al-Hor confirmed to Al-Monitor that the internal correspondence regarding Christmas and New Year celebrations was intended for Muslims in the Gaza Strip and not Christians, pointing out that Christians are an integral part of the Palestinian people.

Hor explained that the purpose of this correspondence was to call on Muslims to follow Islamic traditions, noting that some parties were trying to make trouble by attributing the correspondence meaning that was not intended.

He noted that the relationship between Muslims and Christians in the Gaza Strip and other Palestinian territories is strong.

Hamas delegations typically reach out to Gaza's Christian community over the Christmas holiday every year. This year, the Gaza Strip’s Christmas preparations have been minimal due to the pandemic as curfews and other restrictions have largely prevented merchants and gift shops from importing seasonal goods.

Father Manuel Msallem, the head of the World Popular Organization for Jerusalem Justice and Peace and former pastor of the Latin Church in Gaza, told Al-Monitor, “I read the internal correspondence and I did not find anything offensive to the Christian community. Muslims have their celebrations, and Christians have theirs.”

Msallem said that parties he did not name are trying to stir strife. He noted that Palestine's Christians have never been persecuted by any other religion or Palestinian component.

He added, “The suffering of Christian and Muslim Palestinians is one and the same, as a result of the Israeli occupation and the ongoing blockade. To demonstrate this suffering, I set up in my house a tent symbolizing the Palestinian refugee status due to the Israeli occupation, and it resembles the nativity scene of our Lord Jesus. I will hold the Christmas celebrations inside it this year.”

Christian Gazan Samer Ayyad told Al-Monitor, “The decision really bothered me, even if it did not intend to limit the Christmas celebrations for Christians in Gaza. We are one people in all circumstances, be they suffering or joy.” He added, "It is true that Hamas provides us with security and facilitates celebrations for us every year. However, this does not give it the right to prevent Muslims who want to celebrate the New Year and Christmas holidays from doing so.”

According to 2018 data from the Palestinian Central Bureau of Statistics, Christians make up less than 1% of the total population in the West Bank and Gaza Strip.