The European Court of Human Rights said the imprisonment of Selahattin Demirtas had violated his basic rights. 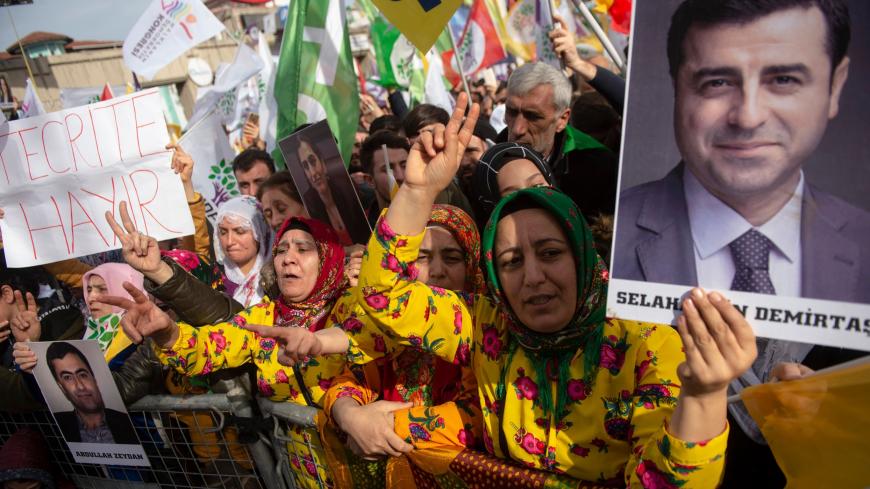 Supporters of the pro-Kurdish Peoples' Democratic Party hold a picture of jailed former party leader Selahattin Demirtas as they attend a "Peace and Justice" rally in Istanbul on Feb. 3, 2019. - YASIN AKGUL/AFP via Getty Images

The Grand Chamber of the European Court of Human Rights ruled Tuesday that Turkey’s four-year-long imprisonment of Selahattin Demirtas, the former co-leader of the opposition Peoples’ Democratic Party, had violated the politician’s basic rights and was “cover for an ulterior political purpose.”

Demirtas has remained in pretrial detention since he and other members of his party were arrested in November 2016 on terror-related charges. After unsuccessful appeals in the Turkish courts, he filed an application with the European Court of Human Rights in February 2017.

In addition to calling for his release, the European court ordered that Turkey pay Demirtas $73,540 in damages. As a signatory to the European Convention on Human Rights, Turkey is legally obligated to abide by the Strasbourg-based court’s decision but has ignored rulings in past cases.

Turkish authorities accuse Demirtas of membership in the outlawed Kurdistan Workers Party (PKK), which has waged a decadeslong violent insurgency on Turkish soil. The PKK is designated as a terrorist organization by Turkey, the European Union and the United States.

Demirtas denies all the accusations and says his imprisonment is politically motivated. He faces up to 142 years in prison if convicted of various terror-related charges.

Speaking to lawmakers from his ruling Justice and Development Party, Erdogan described Demirtas on Wednesday as a “terrorist” who incited violent protests in Turkey’s southeast six years ago.

“The discussion concerns a person wearing a politician’s mask who is intimate with the PKK and has the blood of dozens of people on his hands,” Erdogan said, accusing the European Court of Human Rights of "double standards."

Human Rights Watch on Tuesday welcomed the court’s ruling and called on the Turkish government to swiftly secure Demirtas’ release.

Demirtas is among the tens of thousands of government critics arrested in the aftermath of Turkey’s failed coup in 2016, which Erdogan blamed on supporters of the US-based cleric Fethullah Gulen. In addition to jailing journalists, Kurdish activists and human rights campaigners during the crackdown, the government also dismissed or suspended some 150,000 civil workers from their jobs.

Last month, a Turkish court sentenced more than 300 military personnel and civilians to life in prison for their alleged role in the attempted coup, which prosecutors say they orchestrated from a military base near the capital, Ankara.