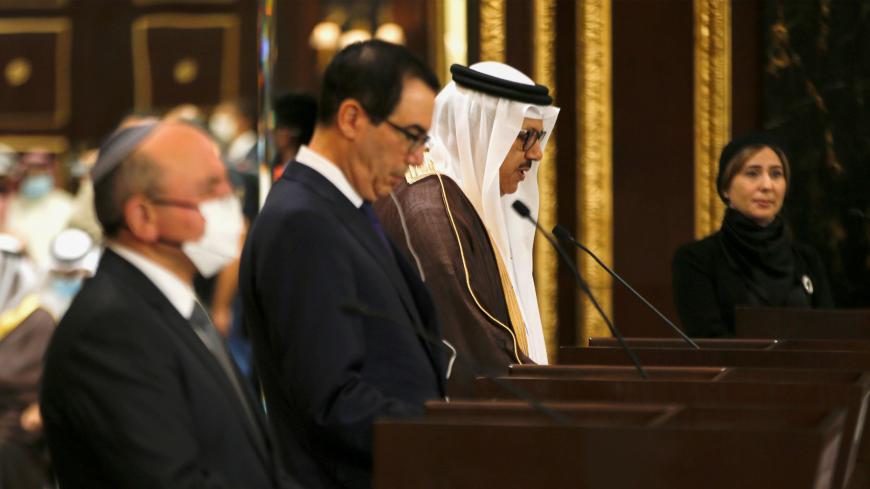 US Treasury Secretary Steven Mnuchin will head to Israel, Egypt, the United Arab Emirates, Qatar and Sudan on his final official trip abroad in the waning days of the Donald Trump presidency.

The administration has also pushed Egypt and Arab Gulf countries to patch up their dispute with Qatar, a rift seen by US officials as a weak link in regional security given Iran’s shifting ambitions in the region.

The trip, tentatively set for early January, was first reported by Bloomberg and confirmed to Al-Monitor by a source familiar with the matter.

Mnuchin last toured the region in October amid the Abraham Accords initiative. It is not yet clear if he will visit Saudi Arabia, whose leaders have held out on the push to recognize Israel. The United Arab Emirates and Bahrain signed agreements in the late summer to normalize ties with the Jewish state, becoming the first countries to do so since Jordan in 1994.

Last week Morocco became the latest country open to establishing relations with Israel, according to the White House. The US administration plans to sell the UAE up to 50 advanced F-35 fighter jets and 18 armed drones following Abu Dhabi’s recognition of Israel. Sudan’s interim leaders have also expressed willingness to normalize ties with Israel but the fate of that agreement remains in question.

Trump’s senior adviser and son-in-law Jared Kushner is headed to Israel next week and will travel from there to Morocco with an Israeli delegation onboard the first ever direct commercial flight connecting the two countries.

Among the outgoing Treasury secretary’s planned stops is Khartoum, Sudan, where Secretary of State Mike Pompeo in August urged Prime Minister Abdalla Hamdok to recognize Israel before the Trump administration finalized its long-planned removal of Sudan from the US state sponsors of terror list.

Though Sudanese officials have expressed openness, the realization of that agreement is increasingly in question. The Trump administration has so far been unable to fully hold up its end of the bargain, namely to convince Congress to pass legislation immunizing Sudan’s government from terrorism liability lawsuits in US courts.

Democratic Sens. Bob Menendez of New Jersey and Chuck Schumerof New York have opposed the legislation, which would invalidate a nearly two-decadelong lawsuit by families of victims of the Sept. 11 attacks.

Trump administration officials reportedly offered $700 million to the families in an effort to salvage the Sudan deal, but it was not accepted. The administration has also approached Congress seeking more than $200 million in preliminary debt relief for Sudan in hope of keeping the agreement with Khartoum afloat.