Turkey’s government has obtained a broad parliamentary mandate for military deployment in Azerbaijan, signaling intentions beyond the joint cease-fire-monitoring center agreed with Russia. 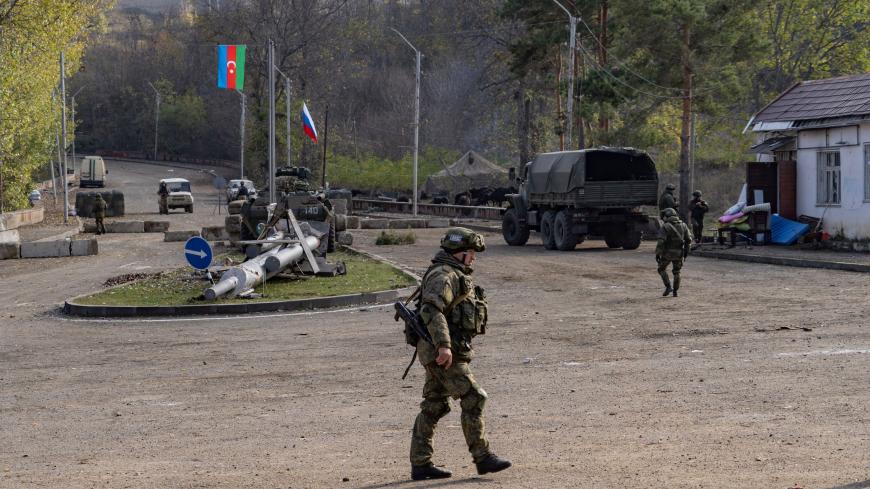 Russian peacekeepers patrol at a checkpoint near Shusha along the Goris-Stepanakert road on Nov. 17, 2020. - ANDREY BORODULIN/AFP via Getty Images

Turkey’s fervent support of its ally Azerbaijan appears to be far from over even after Russia brokered a cease-fire deal between Azerbaijan and Armenia and deployed peacekeepers to monitor the truce in the disputed enclave of Nagorno-Karabakh.

Late on Nov. 17, the Turkish Parliament authorized President Recep Tayyip Erdogan to deploy military forces to Azerbaijan amid Turkish-Russian disagreements on the details of a joint cease-fire-monitoring center to be established in Azerbaijan away from the conflict zone in Nagorno-Karabakh. The one-year mandate entitles the president to decide the time, scope and size of military missions.

The authorization bill refers to the planned participation of Turkish soldiers in the joint monitoring center and to Turkey’s commitments to Azerbaijan under the bilateral Strategic Partnership and Mutual Support Agreement as well as other objectives such as enforcing the cease-fire, preventing violations, securing peace and stability in the region and protecting Turkey’s interests.

Why Erdogan needs the mandate is open to question. Russia has ruled out the deployment of Turkish peacekeepers in Nagorno-Karabakh under the deal that President Vladimir Putin brokered Nov. 10. Ongoing talks with Russia suggest that the role it envisions for Turkey is limited to the presence of military experts at the joint monitoring center and drone surveillance, without any operational missions such as observing the cease-fire on the ground and preventing violations.

Moreover, Turkish soldiers are already present on Azeri soil under the Strategic Partnership and Mutual Support Agreement, which was signed in 2010 and took effect the following year. They were actively involved in planning and organizing the war in Nagorno-Karabakh and operating Azerbaijan’s Turkish-made armed drones during the clashes.

Some might suggest the bill was necessary to legally guarantee the rights of military personnel already in Azerbaijan, as service abroad entitles soldiers to extra benefits. Yet the move also appears to be a sign of efforts or preparations beyond the joint monitoring center with Russia. Ankara might be mulling a military presence for other eventualities, including military intervention and even war.

Unal Cevikoz, a former Turkish ambassador to Baku and now a member of the parliament’s foreign affairs commission, agrees the mandate is broader than what the joint center requires. “I think they are trying to take the matter beyond that scope and use it in domestic politics. The Strategic Partnership and Mutual Support Agreement would have been enough,” Cevikoz, a deputy for the main opposition Republican People’s Party, told Al-Monitor.

Nevertheless, Cevikoz believes that referencing the Strategic Partnership and Mutual Support Agreement is also a risky move because the document contains provisions similar to NATO’s collective defense principle. Article 2 of the agreement stipulates that in case of an armed attack on one of the parties, the other will lend it support in line with the UN Charter’s Article 51 on self-defense, including “the use of military means and capabilities.” Articles 7 and 8 refer to military command coordination and military equipment, infrastructure and logistical support in joint military operations under Article 2.

Thus, by referencing the agreement, the government has effectively obtained an authorization for war. “If such a prospect emerges, this mandate removes the need for a separate authorization,” Cevikoz said.

Aydin Sezer, a prominent Turkish commentator on Russia, similarly questioned the mandate request, stressing that renewed fighting was now unlikely after Russia took control of the matter with the cease-fire deal. “The joint center with the Russians does not require a military contingent. It will be a center for technical consultations,” Sezer told Al-Monitor. “And there is no way for Turkey to intervene against possible violations. Any violations by the Armenian side will be to Armenia’s detriment and even if that happens, Russia will be the one to intervene,” he said.

According to Sezer, domestic politics is the only remaining explanation. The mandate, he said, sends a message to the public that Turkey remains militarily active and influential in Azerbaijan.

“We already have [military] advisers and trainers in Azerbaijan under Article 2 of the Strategic Partnership and Mutual Support Agreement. They did not go there under a parliamentary authorization bill. They went for military exercises and stayed. A legal gap might have now emerged regarding their employee rights, so the bill could be intended to work this out,” Sezer said. “But politically, it is an extremely meaningless move. It shows Azerbaijan as weak, although all occupied territories [of Azerbaijan proper] and parts of Nagorno-Karabakh have been recaptured,” he added.

Sezer believes that pro-Russian quarters in Azerbaijan are annoyed by Turkey’s growing political and military influence in the country, while those favorable to Turkey and the West are irked by Russia’s return to the country. Although such differences are not vocalized, Azeri President Ilham Aliyev is trying to keep both Turkey and Russia happy to balance the two camps, he argued.

At home, the media portrayed the authorization bill as a reflection of Turkey’s expanding influence from the Middle East and Africa to the Caucasus and Central Asia, emphasizing Turkey’s ethnic kinship and historical bonds with Azerbaijan. “A reunion after 102 years! Turkish soldiers off to Azerbaijan” read the identical headline that many pro-government media outlets used. The likewise identical reports read, “Turkish soldiers will once again go on a peace mission to Azerbaijan, having rescued Baku from Armenian gangs and the Bolshevik occupation 102 years ago. The historical reunion of one nation and two states will be once again demonstrated to the world. By creating a peace corridor from the Caspian Sea to the Mediterranean, Turkey will command strategic importance as an element of tranquility, peace and stability in the region and the world.” The reports listed 15 countries in Asia, Africa and Europe where Turkey currently has a military presence.

Under the Nov. 10 deal, Azerbaijan will gain a transportation link to the Autonomous Republic of Nakhchivan, an Azeri exclave separated from the mainland by a strip of Armenian land and shares a tiny border with Turkey. The provision has led to overblown expectations in Turkey that the connection will amount to a corridor linking Turkey to the Turkic republics of Central Asia and revive the trade routes of the historical Silk Road.

In fact, the deal marks Russia’s military return to Azerbaijan eight years after it evacuated the Gabala base in the country. Moscow has shown who the boss in the Caucasus is. Thus, its acquiescence to a joint monitoring center with Turkey and muted attitude in the face of Ankara’s military posturing is quite understandable.

The snags may not be showing in official statements, but they are surfacing on technical level. The two sides failed to agree on technical details during two-day talks in Ankara last week, according to Turkish media reports. The Turkish side reportedly pressed for the deployment of a small number of Turkish troops in Nagorno-Karabakh along with the Russian peacekeepers, but the Russians agreed only to drone surveillance with no Turkish boots on the ground in the conflict zone. The deadlock led the Russian delegation to return to Moscow for consultations.

The essential divergence stems from how the two sides frame the purpose of the joint center. Russian Foreign Minister Sergey Lavrov has described the joint mission as simple monitoring, while his Turkish counterpart Mevlut Cavusoglu says the center will not only monitor the truce but also enact measures to prevent violations, hence Ankara’s insistence on having troops on the ground.