Young Kurd Kemal Kurkut was shot dead in 2017 in Diyarbakir and while his police officer killer will go unpunished, the photographer who documented the incident faces serious charges. 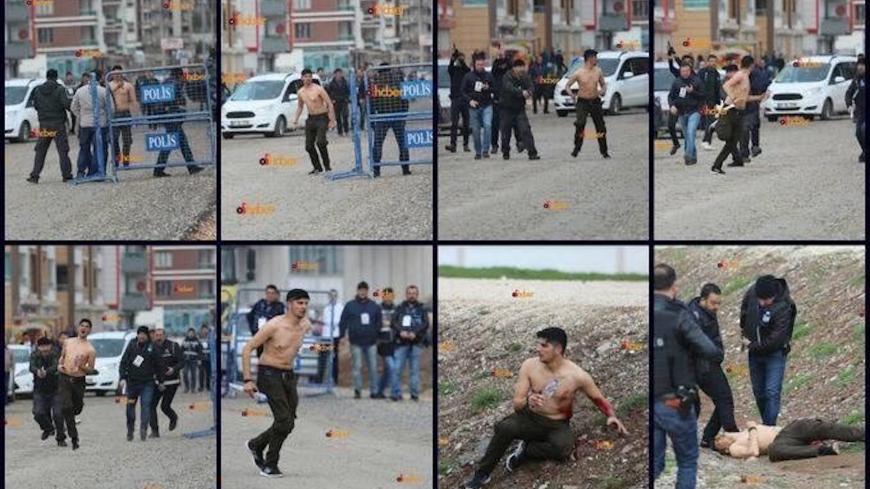 Kemal Kurkut, a 23-year-old Turkish university student, is shot dead by police in this series of photos taken in Diyarbakir by photojournalist Abdulrahman Gok, who is on trial and faces a 20-year sentence for taking them. - Abdulrahman Gok

A picture may be worth a thousand words, but eight shots taken by journalist Abdulrahman Gok scream one: murder. Gok is on trial for taking the photos in Diyarbakir on the morning of March 21, 2017. The prosecutor is demanding 20 years.

The bare-chested 23-year-old in the photos is Kemal Kurkut. He was a college student majoring in music, a violin player who traveled to Diyarbakir that day for Newroz. After almost four years of trial, the officer who fired the shot was acquitted in mid-November.

Al-Monitor spoke with Gok, Kemal’s older brother Ercan Kurkut and the family’s attorney Reyhan Yalcindag Baydemir. “Kurds are being killed, then they are being compelled to prove at court their own murders,” Baydemir said.

There is a website where such cases that would otherwise be labeled "perpetrator unknown" are documented and evidence such as videos and photos of assailants caught in the act are shared with the public. Still, justice remains elusive.

Kemal’s short life exemplifies the growing discontent of young Turks. Kurds and Alevis are vulnerable to arbitrary oppression by the authorities at any time.

Ercan Kurkut told Al-Monitor, “We lost our dad when Kemal was only 6 years old. As a family, we centered our love and affection on our ‘delalê male’ [a Kurdish term of endearment for the youngest of the family meaning source of joy]. Kemal was 19 years old during the Gezi uprising. When he heard the piano recitals at Gezi Park, he decided to go back to college to pursue his passion, music. Gezi was the also first occasion when Kemal heard the cops asking people, ‘Where are the Kurds?’’

As part of efforts to suppress the movement, security forces removed the piano demonstrators had brought to Gezi Park.

Ercan continued, “Kemal was one of the survivors of the Ankara train station bombing. He was 21 at the time. He experienced the brutal death of his friends there, and afterward he was quite distraught.”

In 2015, when an Islamic State-affiliated suicide bomber killed 109 people at a peace rally at an Ankara train station, Prime Minister Ahmet Davutoglu told the press, “We have a list of names of potential suicide bombers, but we cannot arrest them until they act.” After Kemal’s murder and before Gok’s photos were released, Diyarbakir's governor announced that Kemal had been killed on suspicion of being a suicide bomber.

It was the first Newroz after the 2016 coup attempt and emergency law was still in effect. Eye witnesses said Kemal was harassed at the police checkpoint and not allowed to enter the square. He had to take off his shirt to show that he was unarmed. Upset, he grabbed a bread knife from a shop nearby and pointed it at himself. His brother and attorney believe it was a “give me liberty or give me death” moment after witnessing years of discrimination and abuse by his own government.

If not for Gok’s honest photos, Kemal would have been another case of ‘potential terrorist eliminated’ for the state records. Gok had to hide his camera's memory card from the police when they illegally searched him. The family’s attorney Baydemir told Al-Monitor that all other recordings were confiscated by the police. Gok’s photos coming after the announcement that a possible suicide bomber was eliminated discredited the security forces.

Baydemir said, “It is a crime to destroy evidence. If government officials fail to disclose all the documents to the courts, the fines are even higher. The evidence here is abundant and with Gok’s photos, it is public. But we are still trying to prove Kemal was murdered.” Baydemir explained that if the police claim they were combating terrorism, they are not responsible for any of their actions.

Still, Baydemir still believes justice will be served. “It may take a decade or longer, but we will get justice,” she commented.

Al-Monitor spoke with a retired police inspector who served over three decades in the force. He said, “I am sure once they did an ID check on Kemal, they must have realized he is a Kurd and possibly an Alevi. It is dismally obvious that policing in Turkey is defined by religious and ethnic identity. Being Alevi and Kurdish makes you disposable. Why have the Turkish internal security forces gotten so big? My answer is to look at pillars of Turkishness that prevent Turks from confronting ultranationalists.”

Indeed, the police forces resemble occupying armies, both with their gear and methods in the Kurdish region. High rates of unemployment, drug addiction and prostitution plague Turkey's Kurdish cities. The government-appointed mayors, rampant police brutality and an army of imams have gradually altered the fabric of their society.

Allegations against special forces of rape and sexual harassment are ignored. In the rare cases when such accusations are publicized, officials will unabashedly dismiss the matter, claiming the incidents are affairs gone wrong between soldiers and girls who want to marry them. The former mayor of Siirt commented, “It is better that they are involved in prostitution than protesting the government.”

In this context, Newroz celebrations are a rare opportunity for young Kurds to connect with their identity. In cultural expression they find a form of resistance against oppression and marginalization by the Turkish state.

The acquittal of the police officer and his collaborators came at a time when Turkish President Recep Tayyip Erdogan is desperately trying to attract foreign investors and claiming that Turkey belongs with Europe. Even the simplest reform measures will demand drastically altering the way Turkey polices, prosecutes, judges and imprisons its residents.