Turkey expands crackdown on pro-Kurdish activists with dozens of raids

The prospect for promises of sweeping reform looked bleak in the wake of more than 70 arrests that targeted politicians, doctors, lawyers, journalists and civil society activists. 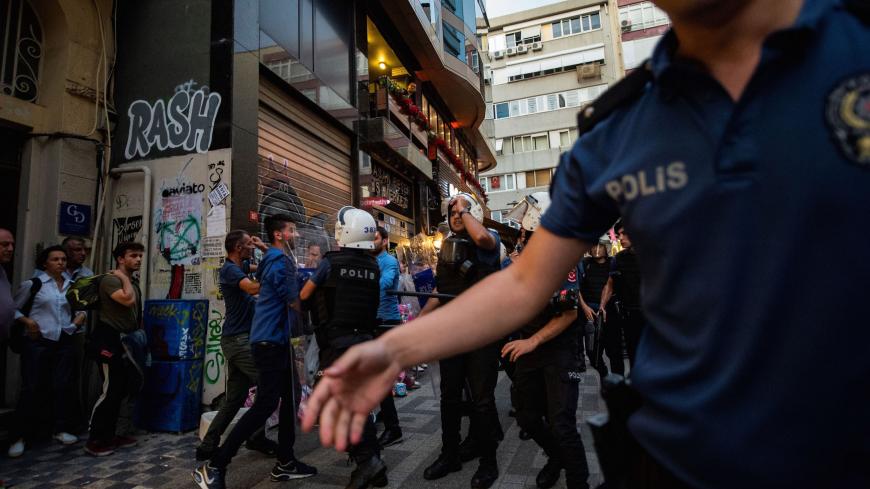 A protester is detained by police during a demonstration against the replacement of Kurdish mayors with state officials in three cities, on Aug. 20, 2019, in Istanbul. - YASIN AKGUL/AFP via Getty Images

Turkish President Recep Tayyip Erdogan’s pledges for sweeping reforms looked shakier Friday, as at least 70 people accused of links to a Kurdish militant group were arrested in raids across the country. They included politicians, doctors, lawyers, journalists and civil society activists who were picked up in dawn raids in connection with an ongoing investigation launched against the Democratic Society Congress (DTK). The group advocates greater rights for Turkey’s long suppressed Kurds.

Warrants were issued by the Diyarbakir prosecutor’s office for 101 suspects whose names were seen in documents seized from DTK offices, “that’s the sum of the evidence against them,” said Cihan Aydin, the president of the Diyarbakir Bar Association, in a statement.

The International Commission of Jurists (ICJ) joined in the calls for the immediate release of all the detainees. They include 26 lawyers. “Lawyers are often subject to bogus charges in Turkey to curb their work, including in defense of human rights and the exercise of their freedom of expression,” said Roisin Pillay, director of the ICJ’s Europe and Central Asia Program.

The arrests are seen as a further manifestation of factional infighting in Erdogan’s ruling coalition, composed of his Justice and Development party (AKP) and his informal coalition partner the Nationalist Action Party, led by veteran far-Right politician Devlet Bahceli. Tensions burst into full view following the shock resignation of Erdogan’s son in law and finance minister Berat Albayrak on Nov 8.

Erdogan and his justice minister have since vowed to introduce new reforms aimed at restoring investor confidence in Turkey’s battered economy, reversing the AKP’s wilting poll numbers and heading off potential sanctions from the West. This in turn has raised hopes that prominent prisoners of conscience, such as philanthropist Osman Kavala and Kurdish politician Selahattin Demirtas, will be freed, if only as window dressing.

“We are determined to bring about a new booming era for Turkey’s economy and democracy,” Erdogan said in a speech at the EXPO 2020 trade fair in Istanbul Friday. “We are working on both strengthening our economic policies and raising the bar of democracy and freedoms while easing daily life for our citizens,” he added, hours after the arrests took place.

The first concrete sign of change came on Nov. 19, when Erdogan allowed the Central Bank to deliver its largest interest rate hike in two years. The lira rallied instantly, recording a 2% gain against the dollar as investors cheered what is seen as a return to orthodox monetary policy.

Erdogan is militantly opposed to interest rates, claiming that they fuel inflation, while most economists hold the opposite to be true. The true source of his aversion is thought to be his Islamic faith and there is every chance he may reverse course once the lira stabilizes and inflation slows. He hinted as much in Friday’s remarks. “Interest is above all exploitation of the people by way of earning money from money,” Erdogan said.

The shake up in the economy team with a new Central Bank chief and economy minister has met no resistance from Bahceli, whose patronage network stands to profit from Albayrak’s exit.

But democratic reforms are a different matter and it took Turkey’s most notorious mobster, Alattin Cakici, to relay those views in a series of threatening letters targeting main opposition leader Kemal Kilicdaroglu. Many believe they were in fact directed at Erdogan. The letters, which have been taken down by Twitter, included attacks on Kavala and Demirtas. Cakici called them “traitors.” Bahceli in turn made clear he supported the mobster's words when he declared that Cakici was a "true patriot” and a “comrade in my cause.” Faced with a barrage of protest, prosecutors were shamed into launching a criminal investigation against Cakici.

More resistance to freeing Kavala and Demirtas came from Bahceli’s press secretary, Yildiray Cicek, Friday. “May God damn the terrorists you were impressed by,” he wrote on Twitter.

Cicek was responding to Bulent Arinc, a former deputy prime minister and member of the presidency’s High Advisory Council, who told broadcaster Haberturk late Thursday that “I am shocked by the fact that [Kavala] is still detained. He needs to be released. When I read these indictments, I said even a child would not write this.” Arinc, a lawyer by training and a founding member of the AKP, also took aim at Demirtas’ continued detention.

“Are you being paid a commission,” he asked.

It remains unclear whether Arinc has Erdogan’s blessing for his dovish overtures. Some contend that through him Erdogan is seeking to test the waters and gage how his base would respond to reverting to his former reformist self, which saw outreach to the Kurds, the defanging of the military and enhanced rights for women, resulting in the opening of now stalled membership talks with the European Union.

But others say he cannot risk crossing Bahceli. Should the nationalists withdraw their support from their governing coalition, snap elections may prove inevitable and recent opinion polls suggest that Erdogan and the AKP could lose in any fair contest. In 2002, Bahceli did just that, he pulled the plug on the governing alliance between his party and two others, prompting early elections and the rise of Erdogan and the AKP.