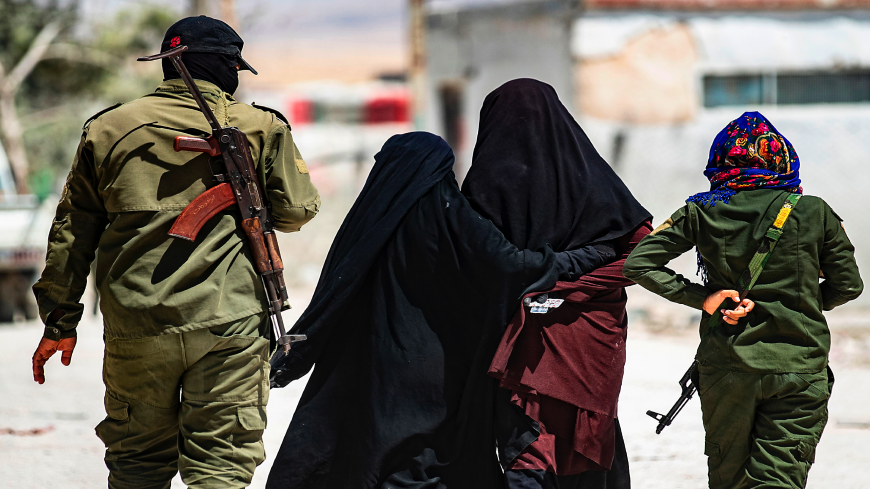 An internal security patrol escorts women, reportedly wives of Islamic State (IS) group fighters, in the al-Hol camp in al-Hasakah governorate in northeastern Syria, on July 23, 2019. Stabbing guards, stoning aid workers and flying the Islamic State group's black flag in plain sight, the wives and children of the "caliphate" are sticking by the jihadists. - DELIL SOULEIMAN/AFP via Getty Images

An Indiana woman who took her children to war-torn Syria after smuggling funds for the Islamic State (IS) was sentenced to six-and-a-half years in prison on Tuesday.

Samantha Elhassani, 35, also received an additional three years of supervised release by the federal judge in the US District Court for the Northern District of Indiana. Elhassani, also known as Samantha Sally, pleaded guilty last year to terrorism financing charges.

She was transferred into US custody in 2018 by the Syrian Kurdish forces who captured her in northern Syria. Her husband, Moussa Elhassani, a Moroccan national, was killed in an airstrike.

“Once again, the Justice Department has held accountable an individual who turned her back on her country to support a terrorist organization,” Assistant Attorney General for National Security John Demers said Tuesday in a statement.

According to court documents, Elhassani took multiple trips between 2014 and 2015 from the United States to Hong Kong with more than $30,000 in cash and gold, which she then melted down to resemble jewelry that would evade customs officials. Prosecutors say she used the funds to buy tactical gear, including rifle scopes and image-stabilized binoculars.

From Hong Kong, the family, including the 7-year-old son and 2-year-old daughter, traveled to Istanbul and crossed from Turkey into IS-controlled territory in Syria sometime around June 2015.

Elhassani’s defense argued that she had been tricked by her husband into traveling to Syria, but prosecutors say she was aware the funds were being used by her husband and brother-in-law to join the terrorist group.

“She knew exactly what she was doing and why,” FBI Special Agent in Charge Paul Keenan said in a statement. “She was an active participant in this heinous activity and is now facing the consequences.”

Notably, Elhassani was not charged over any of her alleged crimes committed in Syria, which included the “purchase and supervision” of Yazidi slaves. During a 2018 interview with CNN, Elhassani admitted to buying three members of the religious minority, including two young girls who were raped by her husband.

The Free Yezidi Foundation says it’s all too common for so-called ISIS brides who acted as willing accomplices and active perpetrators to downplay their own agency. The Netherlands-based advocacy group pushed for stronger charges to be filed in the case.

“We wanted her charged for role in aiding genocide, slavery, and crimes against humanity. But some justice [is] better than none,” the group wrote on Twitter, adding that it was likely too difficult to prove whether Elhassani was coerced.

A lack of admissible evidence is one of the reasons why many foreign governments say they’re unable to repatriate their nationals from Syria and Iraq. Even in Germany, which has led the way in seeking accountability through domestic prosecutions, activists say judges have doled out too lenient of sentences.

In October, a German-Tunisian woman was handed a three-and-a-half-year prison sentence for aiding in the enslavement of a Yazidi girl in Syria, as well as membership in a terrorist organization.

Another German woman is currently on trial in Munich for murder, war crimes and membership in a terrorist group. Prosecutors say she and her husband allowed their 5-year-old Yazidi slave to die of thirst in the Iraqi desert heat.