Dozens of Palestinian prisoners in Israel test positive for COVID-19

As of Tuesday evening, more than 80 prisoners at the Gilboa prison in central Israel had contracted the coronavirus, according to the Palestinian Committee of Prisoners' Affairs. 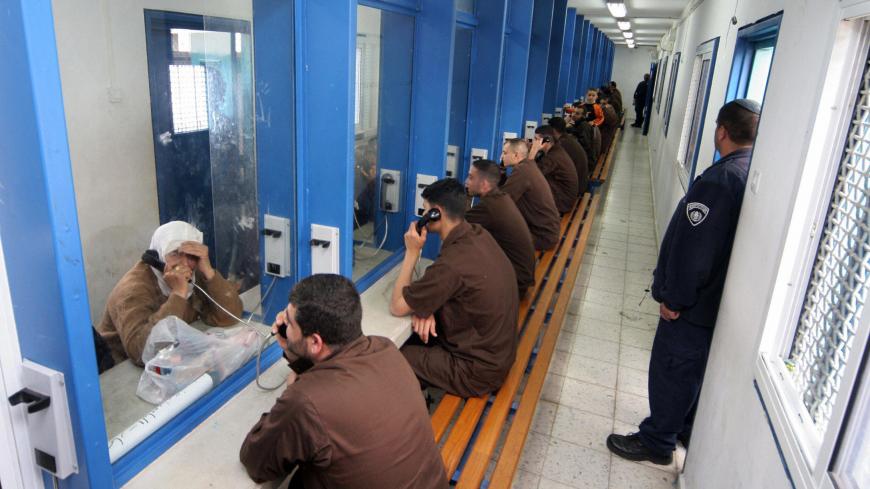 Palestinian men sit in their brown prison uniforms behind glass talking on phones to relatives on March 5 March, 2006, the Gilboa prison, east of the northern Israeli town of Afula. - HAGAI AHARON/AFP via Getty Images

Dozens of Palestinian prisoners have contracted coronavirus inside an Israeli-run prison, the Palestinian Committee of Prisoners' Affairs said Tuesday.

More than 80 prisoners have tested positive for the coronavirus at Gilboa prison in central Israel, which houses some 360 Palestinian detainees, the committee said. The Israeli Prison Service has canceled prison visits in response to the outbreak, and announced plans to move the infected prisoners to the Tzalmon detention center in the Galilee. Haaretz reported that the prison service said at least 56 prisoners had tested positive.

Hamas spokesperson Hazem Qassem blamed the outbreak of coronavirus on Israel’s "deliberate medical negligence.” A Hamas source that spoke to the Palestinian Al Quds newspaper said the militant group “would not remain silent” if prisoners were further exposed to the virus.

The ward where the infections emerged was used mostly for Hamas suspects, Haaretz reported. According to the outlet, the prisoners claim they were infected by one of the wardens. Hamas leader Abbas al-Sayed is among those infected, his wife told Turkey’s Anadolu Agency.

In a separate Israeli prison, Palestinian Maher al-Akhras marked 100 days of his hunger strike Tuesday. Al-Akhras, whom Israeli authorities accuse of membership in a terrorist group, has been held in “administration detention” without charge since his arrest in July.

Israel has seen a decline in new cases. Worldometer said the country reported 892 coronavirus cases Tuesday, down from the daily peak of more than 9,000 last month. Of the more than 316,000 cases in Israel reported this year, at least 2,592 people have died.

This week, Israel launched the first phase of human trials for an experimental coronavirus vaccine that researchers hope to roll out by summer. The first two Israeli volunteers, a 26-year-old and a 34-year-old, were injected with the BriLife SARS-CoV-2 vaccine Sunday.