Two volunteers received doses of the vaccine Sunday in the first phase of human trials. 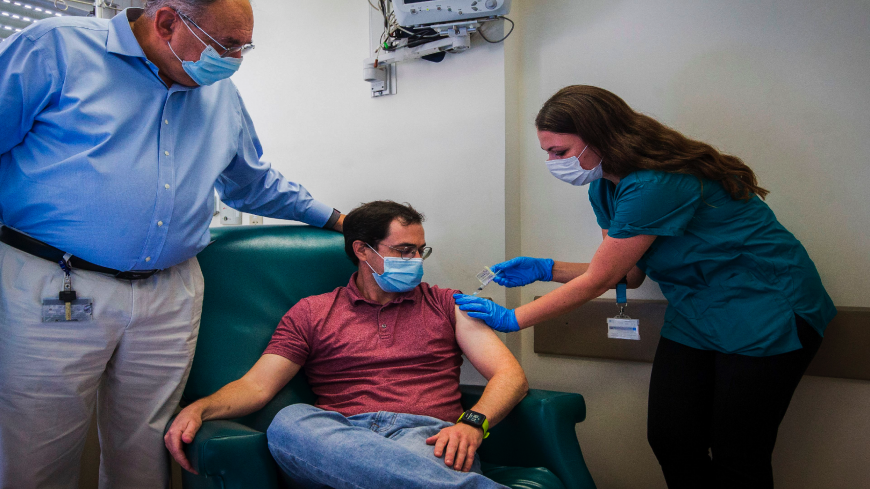 Israel has begun human trials of a COVID-19 vaccine that scientists hope to roll out to the public next summer, with the first two volunteers receiving doses of the vaccine on Sunday.

A 26-year-old and a 34-year-old were injected with the BriLife SARS-CoV-2 vaccine, which the Israel Institute for Biological Research (IIBR) began testing on animals in March. The state-run laboratory has so far produced 25,000 doses of the vaccine to be used in human trials at the Sheba Medical Center near Tel Aviv and the Hadassah Hospital in Jerusalem.

“The true exit from the coronavirus crisis is in the development of vaccines,” Prime Minister Benjamin Netanyahu said after meeting with one of the trial’s volunteers on Sunday.

“Therefore, this is a very important day, a day that gives a shot of encouragement. … We wish success during these and the latter stages. With God’s help, we will have a vaccine made here in Israel. This is a very big thing,” he said, according to The Jerusalem Post.

The first phase of the trial will test 80 people between the ages of 18 and 55, with a second phase to include 960 volunteers in December. If the vaccine proves safe, the third and final round of testing will involve 30,000 volunteers and begin in April or May.

Shmuel Shapira, head of the research institute behind the trial, said in an interview with Ynet News that he hopes the vaccine could be ready for use in the general population by July.

Israel’s race to find a vaccine isn’t limited to its own research. The country will reportedly participate in two separate coronavirus vaccine trials in Australia and Europe. Israeli and Emirati drug companies are also collaborating on COVID-19 research.

Since detecting its first case in February, Israel has reported more than 315,000 COVID-19 cases and 2,554 deaths from the virus. The number of active cases has fallen below 10,000.

On Monday, the coronavirus Cabinet signed off on the Health Ministry’s plan to increase fines for schools and businesses that violate virus restrictions. The new fines still need approval from the Knesset before becoming law.