The 58-year-old Hamas official was tested after experiencing symptoms. 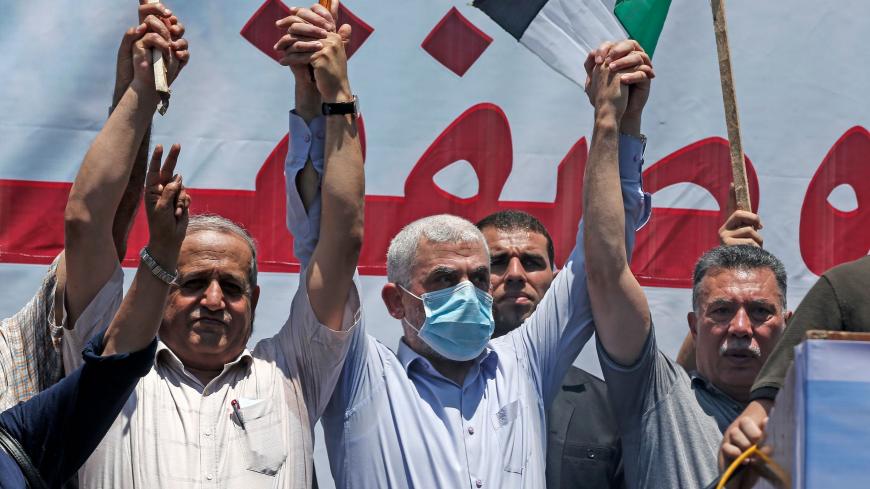 Hamas leader Yahya Sinwar (C) takes part in a rally as Palestinians call for a "day of rage" to protest Israel's plan to annex parts of the occupied West Bank, in Gaza City on July 1, 2020. - MAHMUD HAMS/AFP via Getty Images

The leader of Hamas in the Gaza Strip, Yahya Sinwar, has tested positive for COVID-19 and is now in quarantine, the militant group said in a statement Tuesday.

“A special coronavirus test was conducted for Yahya Sinwar, head of Hamas in Gaza, after symptoms manifested and it came back positive,” his office said. “We emphasize that Yahya Sinwar is fine and in good health, thank God. He is working normally according to safety protocols and medical quarantine.”

The deadly virus has also reached the leadership of the Palestinian Authority in the West Bank. Veteran Palestinian negotiator Saeb Erekat, who acted as chief architect for decades of negotiations with the Israelis, died last month following complications from the coronavirus.

Sinwar is one of the founding members of the precursor to Hamas’ military wing and is considered a hard-liner on Israel. In 1988, Israel arrested Sinwar and sentenced him to life in prison for terrorism, including the kidnapping and murder of two Israeli soldiers.

He was released in 2011 under a prisoner swap that traded more than 1,000 Palestinian detainees for captured Israeli soldier Gilad Shalit. In 2015, the US State Department added Sinwar to its list of global terrorists.

The Hamas-run Gaza Strip has reported a troubling recent uptick in coronavirus cases. On Tuesday, the Gaza Health Ministry announced 815 more positive cases and nine deaths. Most of the roughly 20,000 coronavirus cases recorded since March were detected in the past few months.

In the tiny territory of some two million people, where many live in crowded refugee camps, hospitals are understaffed and overwhelmed. According to Israel’s Haaretz newspaper, 70% of Gaza's hospital beds are currently occupied by COVID-19 patients.

“The two million Palestinians living within Gaza’s confines would face catastrophic consequences from a major outbreak,” he said.

A report last week from the UN Conference on Trade and Development warned the Gazan economy is “near collapse.” Three wars with Israel and a 13-year blockade of the Palestinian enclave have caused as much as $16.7 billion in economic damage and left more than half of Gazans living below the poverty line.