A senior Palestinian official said Tuesday that the Israeli-Palestinian relationship will "return to how it was." 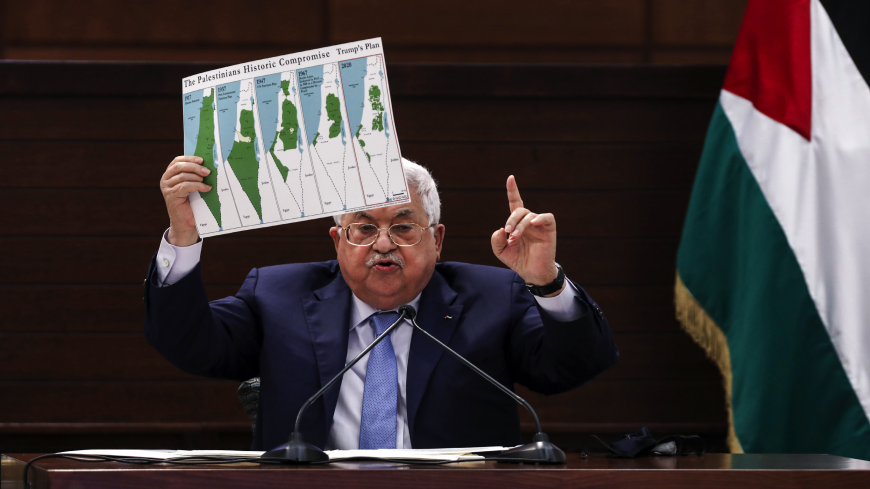 Palestinian President Mahmoud Abbas holds a placard showing maps of (L to R) historical Palestine, the 1937 Peel Commission partition plan, the 1947 United Nations partition plan on Palestine, the 1948-1967 borders between the Palestinian territories and Israel, and a map of US President Donald Trump's proposal for a Palestinian state under his new peace plan, as he speaks in the West Bank's Ramallah on Sept. 3, 2020, as he meets by video conference with representatives of Palestinian factions gathered at the Palestinian Embassy in Beirut in rare talks on how to respond to such accords and to a Middle East peace plan announced by Washington this year. - ALAA BADARNEH/POOL/AFP via Getty Images

The Palestinian Authority (PA) announced on Tuesday that it would restore ties with Israel, renewing civil and security cooperation after a six-month-long standoff that kept millions in tax revenues from reaching cash-strapped Palestinians in the West Bank.

Hussein al-Sheikh, the PA’s civil affairs minister, tweeted on Tuesday that “the relationship with Israel will return to how it was” and that the Palestinians had received written and verbal pledges from Israel to stick to previous agreements.

In May, Palestinian President Mahmoud Abbas ended civil and security cooperation with Israel over Prime Minister Benjamin Netanyahu’s planned annexation of large portions of the West Bank, an area that the Palestinians envision as part of their future independent state. Those plans are now on hold as part of Israel’s normalization agreements with the United Arab Emirates and Bahrain.

In addition to cutting security cooperation, the PA said it would no longer accept the taxes collected by Israel on behalf of the Palestinians, which constitute roughly 60% of the PA’s overall revenue. Without the payments, the Palestinian leadership has struggled to pay the salaries of tens of thousands of civil servants.

A drop in foreign donor aid amid the pandemic has accelerated the PA’s funding crisis, with the World Bank warning in June the Palestinian economy could contract by as much as 11% in 2020. Local revenues have also declined as coronavirus restrictions forced businesses to close their doors and residents to stay home.

Palestinian sources told Reuters that cooperation with Israel is expected to resume immediately, but it wasn’t clear if ties to the Donald Trump administration will also be restored.

The Palestinians cut ties with the United States after the unveiling of Trump’s Middle East peace plan, which called for Israel to annex all the settlements in the occupied West Bank. In a break with decades of US policy, Trump also recognized Jerusalem as the capital of Israel and moved the US Embassy from Tel Aviv to the holy city.

Secretary of State Mike Pompeo will reportedly visit the Israeli-occupied Golan Heights and a West Bank settlement as part of his trip to Israel in what would be a first for a US secretary of state.

The Palestinian leadership is hopeful that a Biden administration will mean improved relations with Washington. The incoming Biden team has already signaled it will restore aid to the Palestinians that was frozen under Trump, in addition to reopening the US consulate in East Jerusalem and the Palestinian mission in Washington.

Referring to Biden as “president-elect,” Netanyahu spoke Tuesday with Biden in what the prime minister’s office described as “a warm conversation." Biden “reiterated his steadfast support for Israel’s security and its future as a Jewish and democratic state,” according to the transition team’s readout of the call.