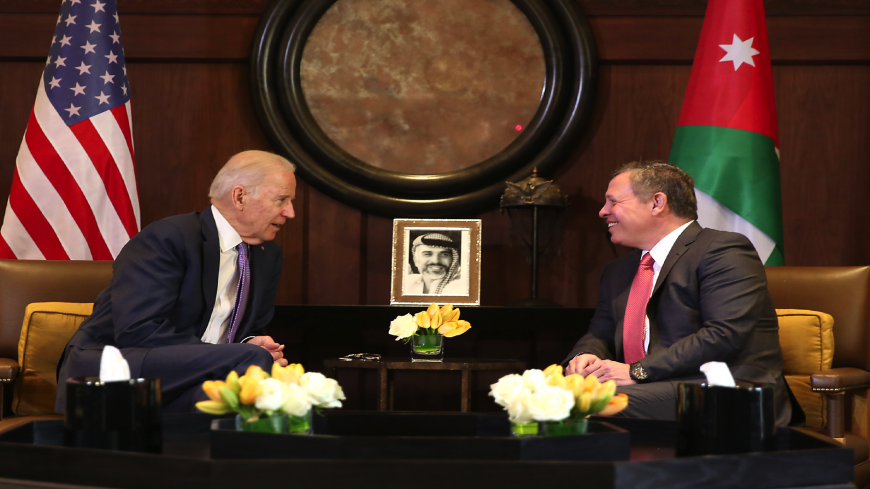 Jordan was among the few countries in the region relieved by the outcome of the US presidential election. Until Nov. 3, Amman was preparing for a second Donald Trump administration, and the feeling here was that the kingdom — which relies heavily on US aid and military support — would come under tremendous pressure to conform with Trump’s plan for peace in the Middle East, which he revealed in January. King Abdullah II had ignored the plan and continued to insist that peace between Israel and the Palestinians must be based on the classic two-state solution, which the Trump administration had clearly sidestepped.

Along with the Palestinians themselves, Jordan had much to lose from the Trump peace plan, which came in the wake of a number of steps that Trump had taken since he assumed office, including the recognition of Jerusalem as Israel’s capital, defunding of the UNRWA, recognition of illegal settlements, and encouraging normalization between Arab states and Israel before resolving the latter’s conflict with the Palestinians contrary to the 2002 Arab Peace Initiative.

In fact, Jordan was taken aback by the decision of the United Arab Emirates (UAE) and Bahrain to normalize ties with Israel, under US auspices, which led to the signing of the so-called Abraham Accords at the White House in September. Abdullah maintains good working relationships with the leaders of both countries, and Amman was careful not to criticize the two Gulf countries for breaking ranks.

Battling the COVID-19 pandemic and a deteriorating economy had stretched the kingdom’s resources and its ability to withstand US pressure. Ever since Abdullah objected to Trump’s moves on Jerusalem and ignored the president’s peace plan, relations between the two had clearly become tepid. They had not met in over two years, and it is no secret that the president’s son-in-law and architect of the peace plan, Jared Kushner, is no fan of Jordan and its insistence on the two-state solution.

But the reality that Trump might have won a second term in office pushed Jordan to follow a pragmatic path. In May, the king dissolved parliament and called for an election, the date of which was set for Nov. 10, seven days after the US elections. The government had ignored calls to postpone the elections because of a spike in coronavirus infections that put the kingdom among the highest in daily infection rates in relation to the size of its population.

The government claimed that the election was a constitutional necessity — although the king could have extended the term of the previous parliament. Under the election law, voting must be in person. And health experts warned that voting would increase the rate of infections. Pundits also wondered why the government was insisting on holding the elections under the same controversial election law that was criticized for failing to encourage political parties and favored traditional pro-government candidates.

As predicted, the elections saw a historic low turnout by voters — less than 30% — and delivered a largely loyal, tribal-based Lower House. Islamists and women were the main losers, having lost more seats, while the number of retired officers taking their places under the dome increased.

One reason for insisting to hold the elections in the midst of a pandemic was Amman’s anticipation of a Trump victory and its consequences for Jordan, especially in regards to the fate of over 2 million Palestinian refugees in the kingdom. One informed source, who requested anonymity, told Al-Monitor that Amman wanted a loyal and docile parliament that could back controversial decisions.

There is no doubt that there was a sigh of relief in Jordan as results pointed to a Biden victory. Abdullah was among the first Arab leaders to welcome Biden’s win. On Nov. 7, he tweeted his congratulations to the president-elect and Vice President-elect Kamala Harris, saying that he looked forward to working with Biden “on further advancing the solid historic partnership between Jordan and the United States, in the interest of our shared objectives of peace, stability and prosperity.” On Nov. 23, the king became the first Arab leader to call Biden and discuss future cooperation.

Not to allow recent events to keep Jordan isolated from Gulf states, the king flew to Abu Dhabi and attended a trilateral summit on Nov. 18 with Bahrain’s King Hamad Bin Isa Al Khalifa and Abu Dhabi’s Crown Prince Sheikh Mohammad Bin Zayed Al Nahyan. According to The Jordan Times, the three leaders discussed cooperation and integration in a number of vital sectors, especially health, food security and pharmaceuticals, as well as joint efforts to counter the COVID-19 pandemic and mitigate its economic and humanitarian repercussions.

But it was interesting that they also referenced the Palestinian cause and “the need to achieve just and comprehensive peace on the basis of the two-state solution, which guarantees the establishment of an independent, sovereign and a viable Palestinian state on the June 4, 1967, lines, with East Jerusalem as its capital.”

While the Biden administration may not reverse some of Trump’s decisions in regards to Israel and the Palestinians, the feeling here is that it will restore its funding of the UNRWA and resume contacts with the Palestinians. It remains to be seen how the Biden White House will pursue its peace efforts, especially in regards to backing the two-state solution. Amman is also optimistic that the new administration will boost its support to Jordan as the kingdom attempts to revive its struggling economy.

Political commentator Labib Kamhawi believes Biden’s win will have a positive effect on Jordan. He told Al-Monitor Biden knows the king and has dealt with him numerous times both as a veteran US senator and as vice president under former President Barack Obama. “Trump was seeking to shut down the Palestinian cause in a way that would have hurt Jordan … he put pressure on Arab leaders who in turn put pressure on Jordan to abandon the two-state solution,” he said. “There is no doubt that Biden’s victory is good news for the king,” he added.