The Ramon Foundation participates in preparing the mission of Israel’s second-ever astronaut Eytan Stibbe — a first nonprofit organization to be partnered with such a mission. 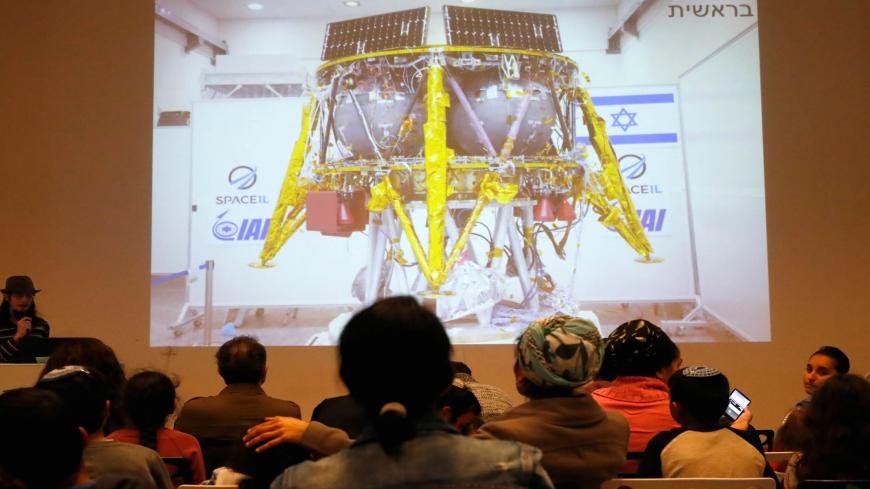 People watch a screen showing explanations of the landing of Israeli spacecraft Beresheet before it crashed during the landing, at the Planetaya Planetarium in Netanya, Israel, April 11, 2019. - Jack Guez/AFP via Getty Images

Director General at the Ramon Foundation Ran Livne is experiencing exciting times. On Nov. 16, Livne and some of his team members met with President Reuven Rivlin at the president’s residence in Jerusalem. There, they revealed the identity of Israel’s second-ever astronaut — veteran Israel Defense Forces (IDF) pilot Eytan Stibbe — who is expected to fly to the International Space Station in about a year. For Livne, the announcement was moving on multiple levels, as decorated retired pilot Col. Stibbe was also a close friend and colleague of Israel’s first astronaut, late Ilan Ramon. In fact, Ramon and Stibbe had served together in earlier years at the IDF air force 117th Squadron.

Rivlin shared Livne’s excitement, and tweeted shortly after the meeting, "A day of great national joy and pride. It's not every day that we announce an Israeli astronaut is going to space. Eytan Stibbe will fly with the blue and white flag [on] his uniform, reminding us that the sky is no longer the limit!"

During an interview with i24 News Nov. 18, Science, Technology and Space Minister Izhar Shai said in regard to the announcement that "the mission has the national goal of elevating space exploration, and reaching out to space missions as they relate to science and research."

Israel’s space adventure started many years ago, with an advanced satellite industry. But the real boost to visibility and public interest came in 1997, when IDF pilot Col. Ramon was selected to fly aboard the space shuttle Columbia. For Ramon, the educational dimension of his mission and advancing the Israeli high-tech industry were both of great importance, and he became a symbol of inspiration and leadership in Israel. Thousands of students and adults followed closely his preparations for the mission, mourning later its tragic end when the space shuttle broke up as it returned to Earth, killing the seven astronauts on board.

The Ramon Foundation was founded in 2010, after the death in a military exercise of Ramon’s son, IDF pilot Capt. Assaf Ramon. Rona — Ramon’s wife and mother of Assaf — was the driving force behind the foundation. The first meeting for the establishment of the foundation took place in Stibbe’s living room. It was all about friendship and vision. In 2019, Rona Ramon received the Israel Prize for lifetime achievement.

The foundation aims to ignite three values that Ilan and Assaf Ramon stood for: academic excellence, social leadership and groundbreaking courage. With these values in mind, the foundation works in peripheral towns, where IDF pilots are engaged with the youth in young leadership programs. They also work with the Israel Space Agency in order to develop educational programs in schools and universities across Israel.

Livne told Al-Monitor that while some people consider space simply as a profession and a goal, just like math or science, the Ramon Foundation believes otherwise. The foundation considers space and aviation as a means to empower, to advancing biology as a field of study, for instance, or even the arts — a way of thinking that encouraged Stibbe to take the plunge and fly into space.

"Eytan realized that him flying into space carries a great potential for Israel’s high-tech industry, science and mostly education. That's why he decided to step out of anonymity, and that is why he decided to submit himself completely to our agenda. To take in the Ramon Foundation on this space mission as part and partner in the agreement," Livne said.

The mission is being organized by Axiom Space company, a commercial provider of human spaceflight services. Apart from Stibbe, it will include two additional private astronauts. Veteran American astronaut Michel Lopez-Alegria will command the mission.

For the Ramon Foundation and for its yearlong partners the Israel Space Agency and the Ministry of Science, Technology and Space, one of the most important phases of the mission starts already in December: A special committee will publish a tender for scientific experiments to be carried out on the International Space Station.

Israel’s Space Agency told Al-Monitor that together with the Ramon Foundation, they will select the experiments to be transported into space and develop educational school programs that would accompany the space mission, as well as lead the partnership and involvement of government ministries in the project.

Shai said in the i24 News interview that hundreds of proposals for experiments are awaiting the committee. He expects researchers, high-tech individuals and students to send in their ideas in all sorts of fields, including optics, renewable energy, agrotechnology and pharmaceuticals. "Experiments could evolve around medicine, the development of special materials which need to be tested in a situation of no gravity; there are other possible experiments in signal-processing, in electro-optics," he noted. Or in Livne’s words — the sky is the limit.