Defense Minister Benny Gantz ordered the "Name of Mother/Name of Father" section be stricken from all administrative forms, to be replaced by "Parent 1/Parent 2." 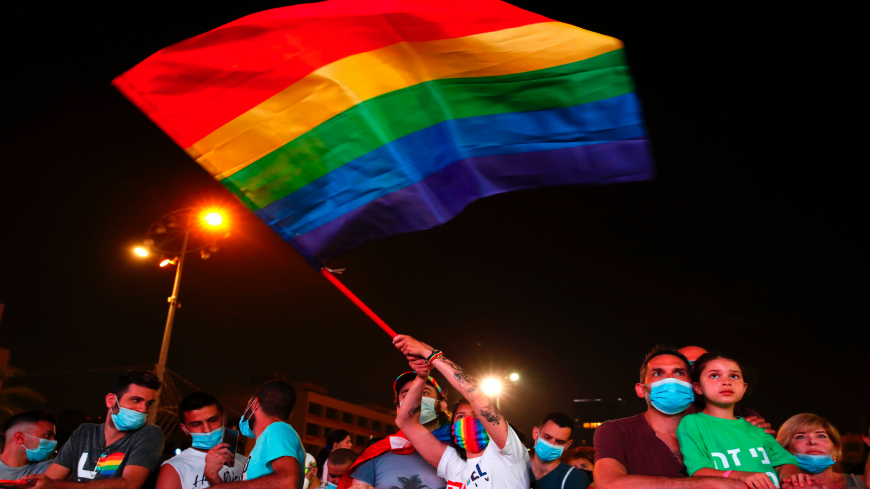 A mask-clad participant waves the LGBTQ rainbow flag as she takes part in Tel Aviv's annual Pride Parade amid the COVID-19 pandemic, on June 28, 2020. - JACK GUEZ/AFP via Getty Images

Israel’s gay community recorded one of the greatest achievements of its long struggle for equal rights on Nov. 19 when Defense Minister and Alternate Prime Minister Benny Gantz instructed that all official forms issued by his ministry replace the “mother” and “father” categories with the designations “parent 1” and “parent 2." Gantz presented the move as a “symbolic and important step on our part — the part of 'the State' to recognize the requests of families and their ways of life.”

Gantz also instructed other ministers of his Blue and White party to integrate the change in the agencies and offices under their purview, as Justice Minister Avi Nissenkorn has already done. The change does not require special legislation since it is a ministerial directive, and it can be implemented immediately.

This may be a symbolic act, but its historic significance and potential for generating change throughout Israeli society cannot be ignored. Service in the Israel Defense Forces (IDF) is mandatory for all Israeli men and women when they turn 18. Except for ultra-Orthodox Jews and Arab citizens, almost every Israeli family has a relative in the military on active or reserve duty, and millions of adult Israelis have served in the army and have already or will in the future send a son or daughter to serve for two or three years.

Given the widespread impact of military service on every facet of Israeli life, this supposedly minor bureaucratic amendment is in fact a powerful agent of social and educational change. Its importance also stems from Israel’s political makeup, with ultra-Orthodox parties wielding significant influence and consistently torpedoing proposed legislation seeking equality between same-sex and heterosexual couples in recognizing their family status and eligibility for social and financial benefits. As expected, Gantz’s decision prompted harsh reactions from ultra-Orthodox and conservative, right-wing circles.

Gantz’s move contradicts the position of the ultra-Orthodox partners in the governing coalition. In fact, on Oct. 28 the Knesset rejected a proposed bill making official state documents more inclusive of same-sex couples.

On the other hand, the move has electoral implications for Gantz as he seeks to lure back the center-left voters who abandoned him after he joined the government of Prime Minister Benjamin Netanyahu in May, and to reverse his party’s plunge in the polls.

Either way, the importance of this step cannot be overstated and work is underway at the Ministry of Defense with plans to issue the revised forms by the end of this year.

Knesset member Ofir Sofer of the right-wing Yamina alliance accused his Blue and White colleagues of “progressive madness” designed to eradicate family values. “Exploiting the defense agencies and the IDF for this current madness is foolish and shameful,” he tweeted.

However, the combative responses against this “violation” of family values spearheaded by the political left and allowed by Gantz to penetrate the military did not rain on the parade of the LGBTQ community and the large swathe of the public that supports its rights. The community hailed the move as an additional victory in its struggle and an irreversible change.

On its official Facebook page, The Association for LGBTQ Equality in Israel hailed the move and noted that it occurred on the 45th anniversary of the group’s founding. It started out as a clandestine group meeting in a small Tel Aviv apartment at a time when the IDF refused to even draft gays — less than half a century later, that same military institution has assumed a key role in the gay revolution.

Following Gantz’s announcement, several local leaders have also announced plans to adopt the changes in municipal forms, among them the mayor of the small northern town of Kiryat Bialik, Eli Dukorsky, who joined Tel Aviv Mayor Ron Huldai in ordering the forms' revisions. The LGBTQ association reports that additional local councils and municipalities are considering such changes, among them Even Yehuda, Herzliya and the Southern Sharon Regional Council. “More and more local councils are doing the right thing and stepping into the vacuum left by the government,” the group wrote on its Hebrew-language Facebook page. “These are not just forms. We are dealing with a real policy change reflecting the understanding of LGBT needs in the urban environment. The gay struggle is everywhere, in the local and national arena, and of course in the personal space of each and every one of us.”

Indeed, quite a few local leaders are taking the initiative and carrying out a grassroots revolution for their gay communities born of the understanding that the religious and conservative pressures exerted on governments prevent them from doing so. For example, the suburban Tel Aviv town of Ramat Gan last week adopted a decision to allow the registration of same-sex couples in municipal institutions. This will allow any couple living in the town, gay or not, to register and be recognized as a married couple for all intents and purposes in the eyes of local authorities. Ramat Gan is the second municipality to adopt this historic change after Tel Aviv.

Israeli attitudes toward the gay community are complex and ambivalent.

On the one hand, two openly gay ministers live with their partners and raise children together — Welfare and Social Affairs Minister Itzik Shmuli of the Labor party and the Likud’s popular Justice Minister Amir Ohana. Ohana enjoys excellent relations with the ultra-Orthodox members of the government and coalition, providing de facto recognition, albeit indirect, of the rights of gay men to partnership and parenthood. After blocking the career advancement of gay officers for years, arguing that they would be susceptible to blackmail, in 2015 the IDF appointed an openly gay officer, Sharon Afek, as military advocate general. He was promoted to the rank of major general, becoming the first gay Israeli soldier to hold that rank.

Still, despite the conservative and ultra-Orthodox forces at work in Israel, both Jewish and Arab, the gay community continues to log achievements in advancing universal values of equality.