Knesset member Mansour Abbas of the Arab Joint List is willing to cooperate openly with the Likud on matters that are dear to his own constituency. 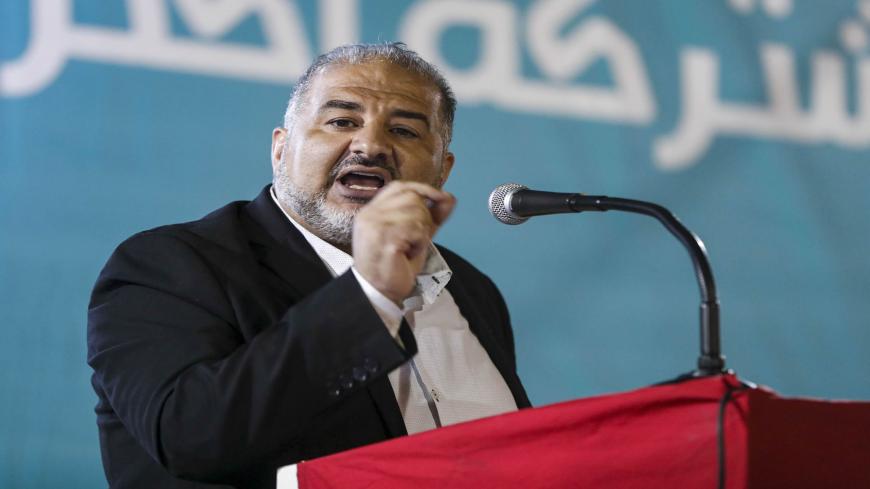 Mansour Abbas, Israeli-Arab member of the Arab Joint List, speaks during a campaign rally for the Joint List political alliance ahead of the upcoming September parliamentary elections, in the Arab town of Kafr Yasif, northern Israel, Aug. 23, 2019. - AHMAD GHARABLI/AFP via Getty Images

A drama unfolded in the Knesset Oct. 21 after opposition members managed to surprise the coalition and authorize the creation of a committee to investigate the submarine affair that implicates Prime Minister Benjamin Netanyahu. However, Knesset Speaker Yariv Levin directed to cancel the vote. A joint announcement with his deputy, Mansour Abbas of the Arab Joint List, who conducted the meeting, stated, “After we watched the video from the Knesset plenum, we both decided that it would be right to cancel the results of the vote and to hold it again.”

Only a few days later, Abbas posted on his Facebook page that government secretary Tzachi Braverman personally informed him that the prime minister decided to put the extension of the five-year plan for the Arab population (decision 922) and Bedouin localities (decision 1480) on the agenda for the next government meeting slated for Oct. 25.

Abbas’ post generated an immediate reaction by Minister for Social Equality and Pensioners Meirav Cohen, who responded, “These are plans we have been working on hard for months, led by the Authority for Economic Development of the Arab Sector at the Ministry for Social Equality, the Council of Heads of Arab Local Authorities and Knesset members of the Joint List. It has no connection to what happened this week at the Knesset plenum. These are very important plans and I am proud to present them to the government for approval — it’s a right and not a gift.”

The decision was indeed brought to the government and was approved as Abbas had announced, but the reactions by his own party members revealed the deep division within the Joint List — a growing rift between Abbas’ Raam party and its other constituent parties. Chairman of the Joint List Knesset faction Ahmad Tibi — who is also the chairman of the Taal party — congratulated Cohen and the Finance Ministry for a step in the right direction. Not a word about Abbas. Chairman of the Joint List party Ayman Odeh did the same. He also made sure not to mention Abbas or offer him any credit for the move.

If that's not enough, on Nov. 4, Abbas wrote that Netanyahu himself is planning to attend a debate of the Committee on Crime and Violence in the Arab Sector, headed by Abbas. scheduled for Nov. 9.

There is no shadow of a doubt that Netanyahu’s anticipated participation in the committee’s discussion is an interesting statement and a type of gesture on his part toward the chairman of Raam. And so, this move was not received well among the Joint List. Knesset member Mtanes Shihadeh of Balad quickly responded to the news, criticizing Abbas sharply without mentioning his name, “Netanyahu is responsible for the rise in crime in the Arab society. It seems he managed to mislead one of the Knesset members from the Joint List. Netanyahu is trying to take apart the Joint List through political cooperation, divide and conquer tactics and granting privileges for a penny to a member of the Joint List.”

This last conflict is another example of the tensions and fights over credit among members of the Joint List, which have come to characterize the party, as I explained in a previous article. But now it seems the rift has deepened. Could these conflicts lead to a split in the Joint List? It’s too early to know. Obviously, no side wants to be remembered and recorded in history as precipitating the breakup of the Joint List — a political alliance that had been so desired among the Arab public. The party still remembers the low support of its constituency in the April 2019 elections, when Arab politicians did not listen to their electorate.

On the other hand, one can’t ignore the chairman of Raam, who has become the rising start of the Joint List and the address for the prime minister in the Arab society.

Who is Mansour Abbas, and does the Arab public support the approach that he presents? Abbas is a dentist from the village of Maghar in the north of the country, who graduated from the Hebrew University in Jerusalem. He has served as chairman of Raam and a member of the Knesset since the April 2019 election. He told Al-Monitor, “I joined the Islamic Movement when I was in high school 30 years ago. I have the impression that my approach and my work are received well among the Arab public, and especially among the large portion that doesn’t belong to any political party.” Asked about Shihadeh’s response to his invitation to Netanyahu to his committee, he struck back at Shihadeh and said, “I’m not concerned with political, party and personal fights. I work with full transparency and professionalism, and prefer to focus on the essence of the issues I deal with — and wish that everyone would be interested in fulfilling their responsibility toward the Arab sector and the public that elected them.”

Perhaps Abbas’ willingness to cooperate publicly with the Likud is what separates him from the rest of the parties in the Arab Joint List, which had always made sure to cooperate with the Likud behind the scenes. It seems that he would like to turn his Raam party into one that deals more with civic issues and less with diplomatic topics. Also, he has no problem openly cooperating with Netanyahu, as long as this benefits his voters specifically and the Arab population in general. More so, he is not willing to be in the pocket of the center-left.

But will this cooperation include support of the “French Law,” prohibiting the prosecution of an elected government official, that could help Netanyahu with his legal battle? Abbas noted, “If and when it becomes relevant, we will discuss it in Raam and the Joint List, whether it’s called the French, Norwegian or I don’t know what law. There’s no point saying something now on this topic when it’s not on the table.”