The Arab Joint List fears the wrath of its constituency, so it has no intention to split back into the four parties composing it. 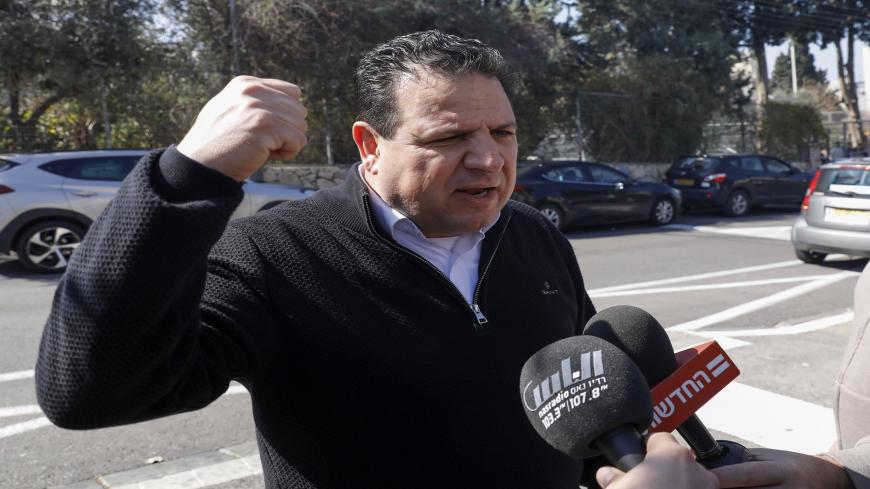 Head of Israel's Arab Joint List coalition Ayman Odeh gestures as he talks to reporters in the city of Haifa, a day after the general elections, Israel, March 3, 2020. - AHMAD GHARABLI/AFP via Getty Images

The Knesset rejected a bill submitted by Yesh Atid, which would have prevented anyone under indictment from being asked to form a government. Fifty-seven Knesset members voted against the bill, while only 37 voted for it on Aug. 12. This can be attributed to the absence of the Blue and White party from the plenum at the time of the vote. Also conspicuous in their absence were Naftali Bennett, Ayelet Shaked and Matan Kahane of Yamina.

The Blue and White party’s decision came as a surprise, given all of party leader Benny Gantz’s statements before the election about how he would never sit in a government with a prime minister under indictment. Equally surprising, however, was an announcement by Chairman of the Arab Joint List Knesset faction Ahmad Tibi, who said, “The members of the Joint List — all of them — would vote for the bill preventing a prime minister from serving if he is under indictment.” What caught everyone’s attention was the way he stressed “all of them.”

Ostensibly, there was nothing out of the ordinary about this statement. Nevertheless, it seemed as if the chairman of the Knesset faction was eager to make it, given tensions between the different parties that make up the Joint List. This began last month, when a bill banning homosexual conversion therapy passed its initial reading in the Knesset July 22, with the support of Knesset members from Hadash, one of the parties that make up the Joint List. Other members of the list were outraged, resulting in a crisis of sorts within the party. Particularly offended by the vote were the members of the Ra’am faction, which represents the Southern Branch of Israel’s Islamic Movement. Ra’am Chairman Mansour Abbas released a statement saying, “The continued existence of the Joint List depends on the behavior of its members in the near future.”

There is no doubt that the proposed conversion law generated a serious conflict within Arab society in Israel, as Danny Zaken wrote for Al-Monitor. It was a conflict that extended into the Joint List, since each side in the dispute wanted to appear attentive to its voters. A source close to the Joint List told Al-Monitor on condition of anonymity, “It looks like Ra’am felt the pressure from their colleagues in the [more extreme] Northern Branch of the Islamic Movement over the proposed legislation, so they decided to flex some muscle in their dealings with [Joint List leader] Ayman Odeh.”

What people sometimes tend to forget is that Knesset member Odeh may be the leader of the Joint List party, but he is not the only person to make decisions for it. The Joint List consists of four distinct parties, representing four trends in Arab society. Had the voter threshold not been raised in 2014, it is doubtful that a common party for these divergent ideologies would ever have been formed at all. As a result, each of the party’s constituent parts is focused on its personal, individual interests and the response of its base.

As such, the question remains whether the future of the Joint List is in question, as Knesset member Abbas claimed, given tensions within the party. It is hard to believe so. Given the party’s remarkable success in the March 2020 election, when it won a record 15 seats, no one would dare break this alliance apart. And it’s not for the simple reason that whoever did that would be accused of harming Arab representation in the Knesset, just as Tibi was, when he announced that he was leaving the Joint List on the eve of the April 2019 election. As will be recalled, two Arab lists ran separately in that election: Ra’am-Balad and Hadash Ta’al, which won a total of just 10 seats. This was attributed to a low voter turnout of 49.2% in the Arab society. The Arab public was angry about the split, so it decided to punish its representatives by staying home on election day.

As such, no one should rush to the conclusion that the Joint List is about to split. Its members have already experienced the wrath of the Arab street, and they don’t want to do that again. On the other hand, no one makes light of reports about tensions within the list either. Each of the parties that make up the list want to stand out independently, rather than leaving the political and media arenas to Knesset members Odeh and Tibi, the Joint List’s two most prominent members.

Further evidence of this can be heard in comments made by Abbas to the allegedly pro-Netanyahu Channel 20, that he would not rule out cooperation with the Likud if he was approached. This may be what distinguishes the current iteration of Ra’am in the Knesset, under Mansour Abbas. He wants his party to stand out for the way it focuses on basic civilian affairs rather than the big political questions of the day. In order to achieve that, he has no problem cooperating openly with Netanyahu and the Likud, provided that such cooperation serves his constituents. In contrast, most cases of cooperation between Netanyahu, the Likud and the Arab parties are hammered out behind closed doors.

Further evidence of this can be found in remarks a senior political source in the Joint List made to Al-Monitor. He said on condition of anonymity, “It’s obvious to everyone that the Joint List won’t split up. On the other hand, because Hadash supported the bill banning conversion therapy, Knesset member Abbas skipped the party’s meetings, claiming that he was sick.” That seems to be the end of the story. Yes, there is tension; no, there will be no split in the party.

Abbas, a dentist by profession, is considered the new face of the Islamic Movement. He represents a relative pragmatic faction of that movement, and was responsible for a woman — Knesset member Iman Khatib-Yasin — being included on the party list for the first time ever. Nevertheless, even as a relative pragmatist, passage of the conversion bill in its first reading was still too much for him. After all, he still represents the Islamic Movement, which is opposed to the LGBTQ community and its rights.